NATO Is Crashing the Economy and Banking System on Our Heads

March 8, 2022—As forecast with awesome precision by Lyndon LaRouche 10 years ago in a webcast, NATO is crashing the global financial system and the economy all around us, through a world war against Russia.

LaRouche broadcast in December 2011, when the regime-change wars had reached the stage of the murder of Colonel Qaddafi of Libya, that “What is intended [by these wars] is a confrontation with Russia, the principal nuclear power on this planet.” London and Washington were threatening world war, he said.

Economic Warfare Against Russia and the Great Reset

Posted by Asuka Burke · March 08, 2022 8:07 AM
The refusal to negotiate with Putin, and accept his demand that reasonable security guarantees be extended to Russia, is what provoked his actions for the demilitarization and denazification of Ukraine.  This refusal to engage in serious negotiations, which has been U.S.-NATO policy for at least 15 years, is NOT based on a defense of Ukraine's sovereignty and freedom, but to provide an excuse for economic warfare against Russia.  WHY?  The economic annihilation of Russia is an essential precondition for the successful implementation of the Great Reset and Green New Deal, which Russia and China will not accept, as it requires that they surrender their sovereignty to a global central banker's dictatorship.  To resolve this crisis, join us in mobilizing for a convention to establish a new security architecture -- sign and circulate this petition: Convoke an International Conference to Establish a New Security and Development Architecture for All Nations.
2 reactions Share

March 7 (EIRNS)—Helga Zepp-LaRouche was one on a panel of three guests on CGTN’s Dialogue broadcast today, responding to Chinese Foreign Minister Wang Yi’s annual press conference, which lasted at least 90 minutes. The other guests were Peter Kuznick of American University and Prof. Victor Gao Zhikai of Soochow University; the hostess was Li Quiyuan. The discussion focused on China’s role in bringing peace especially in the conflict between Russia and Ukraine, but most importantly to the world as a whole. The half-hour panel discussion is posted on the Dialogue program at 15:30 today.

Here are the exchanges between Ms. Li and Mrs. Zepp-LaRouche.

You Know the Media is Lying to You -- Find Out Why

Posted by Asuka Burke · March 07, 2022 8:39 AM
Today, we take on the war-time propaganda coming from the U.S. and NATO forces, desperately attempting to defend their collapsing world order by deploying economic warfare against Russia, to prevent the consolidation of an economic alliance between sovereign nations of Eurasia and Europe.  The economic integration of Europe and Eurasia is no threat to the people of the U.S. and western Europe.  The Chinese have again invited the U.S. to join the Belt-and-Road Initiative.  But it is a threat to the bankrupt financial system the oligarchs in the Trans-Atlantic countries are trying to protect, using war and austerity against the populations of their own countries, to prop up their collapsing post-Cold War Unipolar order.
2 reactions Share

March 6—The facts regarding the multiple fascist organizations in positions of influence in Ukraine since the 2014 coup has generally been kept out of the Western press, although a number of independent journalists and several Israeli institutions have documented (and strongly objected) to the fact that these Nazis were not only tolerated by the Ukraine government, but in fact had power over many aspects of policy—and, this was accepted by Kiev’s controllers in London and Washington. The many Russian documentations of the atrocities committed by these organizations (including a major role in the genocidal military attacks on the mostly Russian-speaking Ukrainians in the Donbas region who refused to accept the illegal fascist coup) were dismissed as Russian lies.The full story of the overt role of the British and U.S. governments’ intentional nurturing of these fascist organizations, going back to the post-World War II CIA and MI6 recruitment of the defeated Nazi networks as tools of their anti-communist Cold War operations, up to the Obama/Biden/Victoria Nuland $5 billion project to overthrow the elected Ukrainian government in 2014 and install the Nazi-linked leaders of Washington’s choosing, is fully documented in the pages of EIR.

When Did the United States Cease Being Democratic?

March 5—On Thursday, March 3, the Russian international television network RT ran an hour-long documentary, “Donbas: Yesterday, Today and Tomorrow,” which had been produced in 2021, showing: the role of the neo-Nazi killers supporting the 2014 Maidan coup against the elected government; the genocide in Odessa when the Nazis barricaded pro-government organizers in the Trade Union Building and burned them alive, shooting those who tried to jump out the windows; the outlawing of the use of the Russian language in numerous ways; the massive bombardment of the Donbas when the citizens there held a referendum declaring independence from the new pro-Nazi government imposed by the United States; the years of shelling from the Ukraine Army and the Nazi Azov Brigade over the past eight years, killing 14,000 men, women and children; and scenes from the past years as the NATO countries refused to put any pressure on Kiev to implement the Minsk 2 agreement, which would have ended the war.

The True Cause for the Start of World War III

What is actually behind the “shadow war” called the “Russia/Ukraine conflict?” The financially desperate city of London and Wall Street have declared war, not only against Russia, China, and, soon, India, but also against the populations of Europe, South and Central America, Africa and the United States itself.

The total destruction of Russia’s, China’s, India’s or any other nation’s science-driven economic development through war, including thermonuclear war, is City of London policy. That is what the “environmentalist” Great Reset — as discussed by Prince Charles, former Bank of England Governor Mark Carney, and UN Special Envoy on Climate Mike Bloomberg at the November COP 26 — actually means.

Predictions that oil may rise to $185/ barrel; calls for the assassination of Vladimir Putin by U.S. congressmen; and calls for “financial nuclear war” on the Russian economy and people, have received a response from former Russian President Dmitry Medvedev. “Today, a French minister said he had declared economic war to Russia. Watch out for your language, Gentlemen ! And don’t forget that economic wars in the history of humanity often were transformed into ‘real wars’!”

This is unfortunately not new. At a meeting of the Schiller Institute in September of 2000, Helga Zepp-LaRouche said:

“I will talk to you today, about the reasons why empires always collapse.

“But, let me start with a rather eerie statement, which Federal Reserve chief Alan Greenspan just made a couple of days ago, at the meeting of top bankers in Jackson Hole, Wyoming, where he reminded people of the fact that, already in 1913, there was a kind of globalization. And, he said: Well, we all thought it would stay, but you all remember what happened one year after that—namely, World War I.”

What is new, is that the leadership crisis in the trans-Atlantic world has meant that we have now reached the point, that an International Conference to Establish A New Security and Development Architecture for All Nations must be convened, and quickly, or the fools of Wall Street and the City of London may succeed in “unloosing the dogs of thermonuclear war,” intentionally or not. Join us for a solution-driven discussion on what you can do, immediately, to reverse this through the circulation and mass discussion of this alternative proposal.

Nations Are Not Lining Up Behind the Lies

March 4—In key venues of international relations this week, it was evident not all nations are lining up behind the lies of the U.S./British/NATO bloc associated with the demand that the economy of Russia must be destroyed, and by extension, that of China too, and other targeted nations with them. The truth is—even if only partially presented and understood amidst the fierce media cover-up and social control—that the Western bloc has been encircling and provoking Russia for decades, as part of its intent to preserve the Western casino economy at all costs, especially now that the casino is untenable. Even the Green Reset gambit cannot put it back together again. 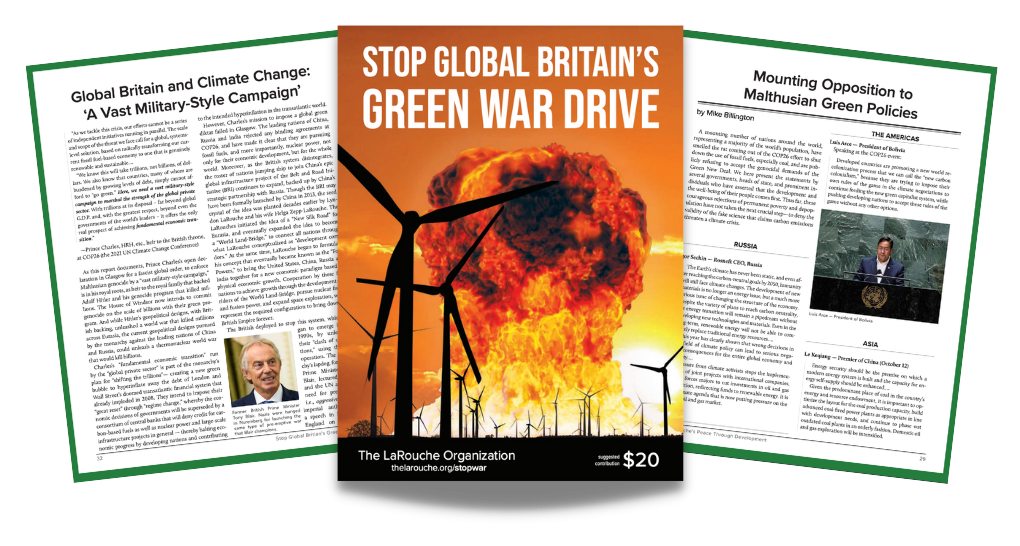 This report is your weapon to defeat Global Britain’s war drive! Get it HERE

The Lost Chance of 1989 and the Case of Lyndon LaRouche

Lyndon LaRouche once said, "I have no enemy who is not evil." Those enemies, by jailing then-presidential candidate LaRouche at precisely the moment of opportunity which his laser beam defense policy, as adopted by Ronald Reagan, had created, have now put mankind on the trajectory of annihilation through thermonuclear war. There is a solution, a new security architecture, as proposed by LaRouche's widow Helga Zepp-LaRouche. Can we bring it into being in time?