This week's call featured excerpts of LaRouche's September 11, 2001 Salt Lake City radio interview, which occurred just after the first tower had been struck. In this he demonstrates the quality of leadership one would expect from a head of state, and outlines the needed strategy for both immediate and long term survival.

Supporting Afghanistan, for World Peace and Development—Opportunities Not To Be Missed

This Saturday, the 20th anniversary of the Sept. 11 attacks, the Schiller Institute is holding an international online event, centered in New York City, titled, “The Path Forward from Afghanistan, 9/11, and the Surveillance State.” Experts—from intelligence specialists to those suing for disclosure of classified documentation—will bring out the truth about the British, Saudi, and corrupt, treasonous U.S. networks behind the attack. Covering up those facts with the Big Lie that rogue bad guys in Afghan caves brought off the air carrier assaults, is a key part of what led to 20 years of destructive, failed warfare in Afghanistan, which is now ended. Schiller Institute President Helga Zepp-LaRouche will speak and participate in the dialogue on what comes next.

Friday Questions: Once Again, Tony Blair Exposes Himself As a War Criminal!

Posted by Asuka Burke · September 10, 2021 7:37 AM
On the eve of the 20th anniversary of 9/11, which led to the "forever wars" which he still supports, Blair reiterated all the talking points used by the Shadow Government to justify geopolitical provocations, huge military budgets, and imposing the Surveillance State.  We take up the question of whether 9/11 was an "inside job"; will Biden's declassification order relating to documents on the Saudi role make a difference; and what is the significance of changes in financial regulatory policies introduced by the Chinese government?
For a full, in-depth analysis of 9/11 and its destructive aftermath, and how to change the direction from geopolitics to peaceful cooperation, be sure to register for the online conference of the Schiller Institute on Saturday, September 11, beginning at 2 PM EDT.
1 reaction Share

This interview was conducted on September 11, 2001, between Jack Stockwell, morning radio host on K-TALK radio in Salt Lake City, Utah, and 2004 Presidential candidate Lyndon LaRouche. It was on the air from 7:15 to 9:00 A.M., Mountain Daylight Time.

Update on Afghanistan, From Outside the Western Media Bubble

While some irresponsible idiots, such as Sen. Lindsey Graham, are calling for the U.S. to send troops back to Afghanistan, there are developments underway that are kept out of the western media.  What, for example, are the Chinese and Afghanistan's neighbors saying and doing?  China has a vested interest in seeing that Afghanistan does not become a safe haven for terrorists, nor drug traffickers.  China's Foreign Minister reiterated that, while China welcomes the pledges coming from the Taliban interim government, recognition depends on following through with a commitment to tolerance, and combating terrorism and drug trafficking.  Did you know that the Taliban had nearly shut down opium production by 2000?  Only after the 2001 U.S.-NATO overthrow of the Taliban government did drug production take off again -- not surprisingly, especially in the province of the country under British control!

Join us for this weekend's 9/11 events:
Friday September 10, 7pm -- 9/11 Memorial Concert, Beethoven's Agnus Dei: Peace for ourselves, and the world
Saturday September 11, 2pm -- Manhattan Project Meeting, Afghanistan and the Surveillance State. Where Do We Go From Here?
2 reactions Share

Why the British Hate Shakespeare and LaRouche

To announce the creation of a new Schiller Institute webpage entitled “Shakespeare In Exile,” the following quote was taken from Lyndon LaRouche, whose 99th birthday occurs today: “…He has pitted his life for his nation’s justice, and for the cause of all this world’s oppressed besides. For this cause, he has adopted the insults which the wicked and the fools of this world have come to heap upon the mere mention of my name…” Lyndon LaRouche, “On the Subject of the Sixtieth Birthday of His Excellency, the Honorable Frederick [R.] Wills, Esquire.,” Sept 16,1988. 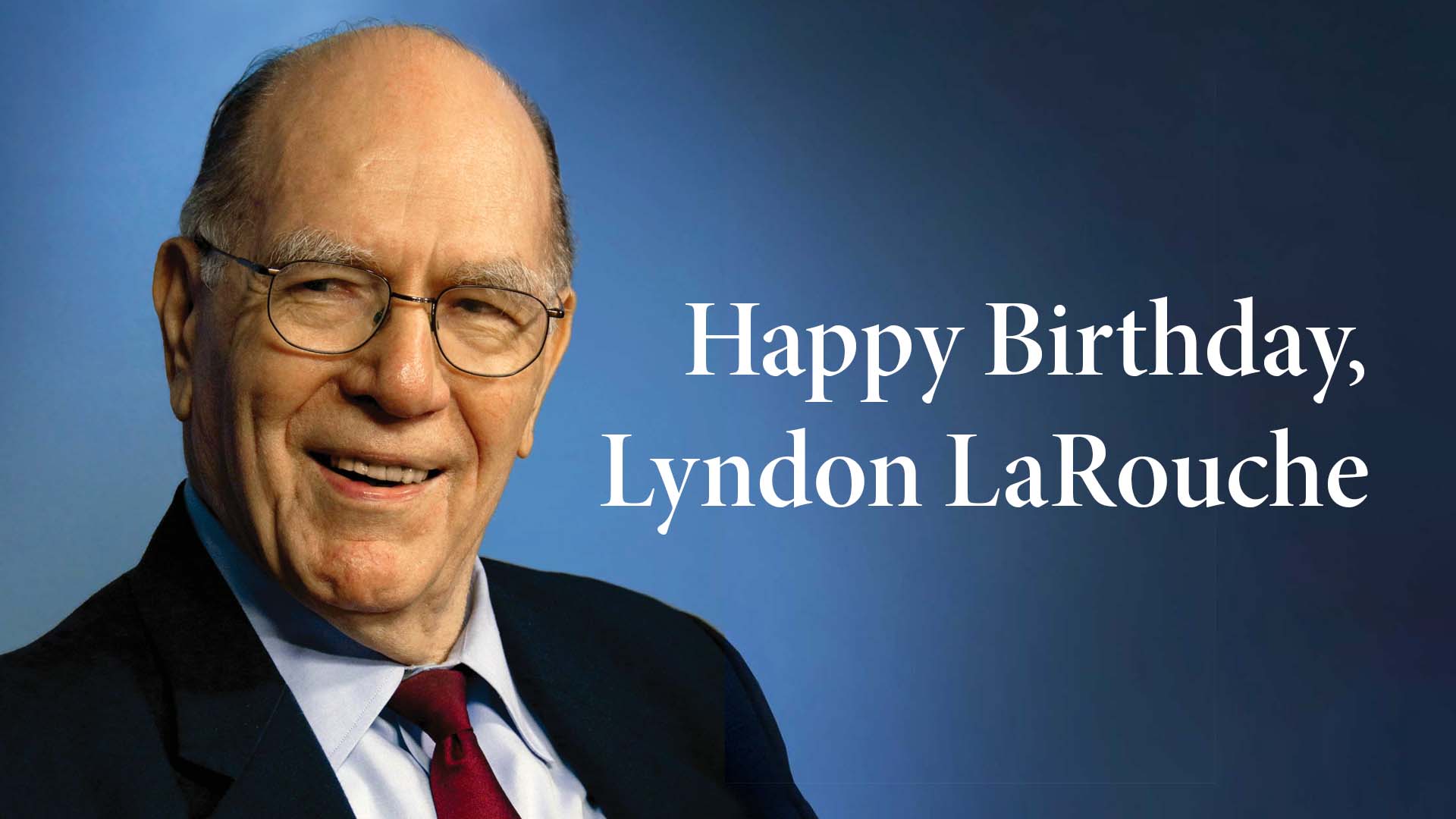 Lyndon H. LaRouche (September 8, 1922–February 12, 2019), economist, statesman and philosophical thinker, proved that a single person, with no externally designated authority, could, through the power of Reason, change the world. By means of not only his writings, but his actions and person, LaRouche proved that humanity can invent, discover, and deploy physical laws that not only change but improve the biosphere. His numerous proposals for science driver programs in thermonuclear fusion and space; for a just reorganization of the international banking system; for fundamental changes in educational designs for instruction in elementary and secondary schools; and for identifying the role of Classical forms of dramatic and musical composition in increasing the capacity for creative thought, are the very ideas which provide the path forward for Earth’s next fifty years.

In celebration of his 99th birthday, we offer three clips of Lyndon LaRouche discussing these crucial conceptions:

Following the retreat of the U.S. and NATO forces from Afghanistan, there are two possible directions for the future, according to Helga Zepp-LaRouche. In her weekly dialogue, she said either those such as U.S. General Milley, Sen. Lindsey Graham, and former British Prime Minister Tony Blair -- all of whom are critics of the ending of the war, and are predicting a civil war, which will lead to the redeployment of western military forces -- will prevail, or an alternative, based on economic cooperation, centered on China's Belt-and-Road Initiative, will be adopted. For the latter to occur, she and the Committee for the Coincidence of Opposites have recommended that Pino Arlacchi be nominated to head negotiations with the Taliban.

Calls from supporters to postpone the upcoming COP26 conference in Scotland indicate that the whole fragile edifice on which the global Green New Deal is built is unraveling.  As we have pointed out, few developing sector nations will surrender their sovereignty, and their development goals, to comply with the demands coherent with the fake science behind "man-made climate change"; and large nations, such as China, Russia and India are intent on advancing energy systems which will increase the Energy-Flux Density of their economies, a necessary precondition for real economic growth.  It is precisely these technological advances which are under attack by the City of London-Davos Malthusians, who are promoting instead "sustainable" and "renewable" energy systems, which will assure a rapid depopulation of the planet -- which is what they intend!

Posted by Malene Robinson · September 07, 2021 8:23 AM
After 20 years of coverup of the real story of what was behind the 9/11 terrorist attack on the U.S., Pres. Biden has ordered the declassification of documents which have been hidden by government agencies, especially the FBI.  LaRouche said, as the attacks were happening, that Osama Bin Laden would be blamed, but he is a "controlled entity...not an independent force."  Yet, the truth about the role of the Saudis and U.S. intelligence in creating and deploying Al Qaeda has been buried, to protect the guilty.
Join us this Saturday at 2 PM EDT for a forum, "9/11/2021: The Path Forward from September 11, Afghanistan and the Surveillance State."
See Helga Zepp LaRouche's statement, "Can the West Learn? What Afghanistan Needs Now"
4 reactions Share