The tsunami of liquidity flowing from central banks into the hands of speculators is setting off an increase in commodity prices, which could soon hit producers, and then be passed on to consumers. Concern over the reaction to this is why global financial cartel players are trying to rush through the Great Reset, which includes a new bubble in "Green" investments. But, as we predicted, there is growing opposition to this foolishness, as U.S. states have filed a lawsuit against Biden's Executive Order mandating a Green reset, and Putin made clear he will not allow Russia to be subject to the blackouts which hit Texas due to green energy policies and a deregulated electricity market.

Biden Goes With British Geopolitics And Climate Fakery As His "Priorities".

Posted by Harley Schlanger · March 10, 2021 4:56 AM
The release on March 3 of the Biden administration's “Interim National Security Strategic Guidance” might make one wonder if Donald Trump's Secretary of State, the unhinged War Hawk Mike Pompeo, is still making the policy decisions for the United States.  Pompeo spent most of 2020 banging the war drums, completely ignoring that his boss, President Trump, had been elected by saying he intended to "end the endless wars."
Read more
1 reaction Share

Unless Americans and Europeans mobilize against the Great Reset and Green New Deal, we will soon be entering the greatest Depression in world history. Most western governments, including the Biden administration, are committed to dismantle the physical, goods-producing economies which remain, in favor of an anti-scientific fraud of achieving "carbon net zero", which will doom most of humanity to death by starvation, new pandemics, and geopolitical wars. There is an alternative, drafted by the LaRouche movement, "How to Restart the U.S. Economy: The World Needs 1.5 Billion New Productive Jobs". It is time we feed the people, and not the City of London/Wall Street predators!

Karel Verecken, editor of Nouvelle Solidarite, discusses how BlackRock became a central player in global finance following the financial crash that began in 2007, all in service to the oligarchical interests of the British Monarchy. Karel’s article titled, “BlackRock’s March to World Power,” is featured in in the EIR Special Edition, "The Great Leap Backward: LaRouche Exposes the Green New Deal."

A desperate financial oligarchy is acting in the face of a collapse of its financial/economic system as it has in the past, that is, Preparing for War! There are several fronts in this pre-war escalation: targeting Russia and China; expanding existing wars in the pivot region of southwest Asia; and increasing the presence and power of the security state against its citizens, who are tired of endless wars and austerity. The same British geopolitical doctrine which led to two destructive world wars and the long Cold War in the last century is being applied again today, in defense of a rotting global economy. And both U.S. political parties are under the control of those corrupt financiers and corporate conglomerates which are trying to impose that British geopolitical doctrine, through the Great Reset. 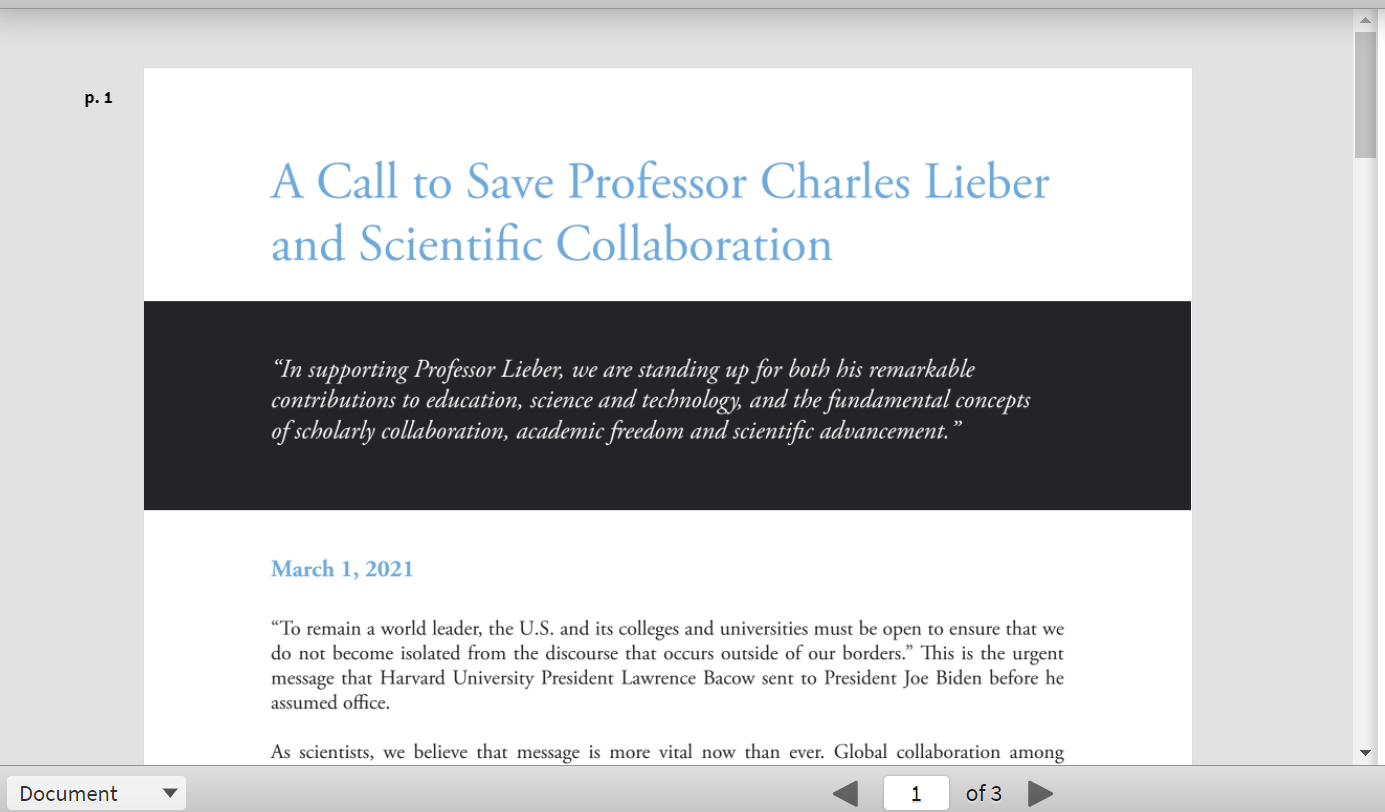 Hundreds of America’s leading scientists, including six Nobel Prize recipients in chemistry, physics and medicine, have issued two powerful denunciations of the FBI’s criminal prosecution of hundreds of Chinese scientists in the United States, including American citizens of Chinese descent, as well as Americans who have collaborated with Chinese institutions for the advancement of human knowledge. These attacks, directed by FBI Director Christopher Wray, in collaboration with the psychotic attacks on China from President Trump’s Secretary of State Mike Pompeo, were exposed in the EIR Special Report of Nov. 22, 2019, “Stop the McCarthyite Witch-Hunt Against China and President Trump.” Now, professors from leading U.S. universities have issued two public letters defending targets of this atrocity—one from Harvard, one from MIT—spelling out clearly that the charges are false, are politically motivated, and go far beyond the persecution of these scientists and educators, but are in fact direct attacks on science itself, and on America’s leadership in international scientific research.

Join us LIVE on Sunday at 11am EST. Stewart Battle introduces Lyndon LaRouche's 1986 appearance at the National Press Club. Fasten your seat belts, you're in for a fun time!

Why “LaRouchePAC” No Longer Represents the Policies of Lyndon LaRouche

Feb. 24, 2021—Helga Zepp-LaRouche, the founder and international leader of the international Schiller Institute and widow of the renowned American economist and statesman Lyndon LaRouche, announced today that, through counsel, she has issued a letter to the Lyndon LaRouche Political Action Committee (LPAC) and its Treasurer, Barbara Boyd, demanding that they “immediately cease and desist, both now and in the future” from “using Mr. LaRouche’s name, likeness, and potentially other confusingly similar terms.” The letter states that such use “is likely to cause confusion among consumers since they may believe that you [Boyd] (as an individual), LPAC, and/or the goods and services being offered are somehow associated with, licensed by, or authorized by our Client [Helga Zepp-LaRouche].” Among the remedies required are that Boyd and LPAC “Immediately take all necessary actions to change the name of your political action committee, and the name of any Affiliated Entities, to one that does not include the term ‘Lyndon,’ ‘LaRouche,’ or any formative or iteration thereof, and agree to refrain from using the infringing terms now and in the future on any website, company e-mails, letter head, advertisements, or other marketing literature or correspondence.”

To provide the background and context for this action, Mrs. Zepp-LaRouche issued the following statement:

China’s annual “Two Sessions” began March 4, as Premier Li Keqiang gave the “Work Report,” the overview of China’s plans for the future—in this case, the 14th Five Year Plan which begins this year, and a perspective for 2050. Following up the historic completion of the project to eliminate abject poverty altogether from the entire nation of 1.4 billion people—accomplished through a combination of infrastructure development even in the most desolate areas of the country, building new cities with millions of new urban jobs, introducing modern agricultural techniques, providing adequate health and education facilities for all, and more—they now have launched a national “Rural Revitalization” project to raise the standard of living and the productivity of the rural communities, and to assure there is no back-sliding into poverty. R&D is to be expanded by 7%, to close the “tech gap” and break the “choke points” created by the sanctions and the overt attacks on the tech sector by the U.S. He Lifang, the head of the National Development and Reform Commission, identified the primary areas for expanded investment: quantum information, interstellar exploration, energy and food security, and industrial supply chains.

Why the "Great Reset" Is Dead On Arrival: Ideas, Not Oligarchies, Change the Universe

Join us LIVE on Saturday at 2pm EST.
Today's guests include Harley Schlanger and Claudio Celani.