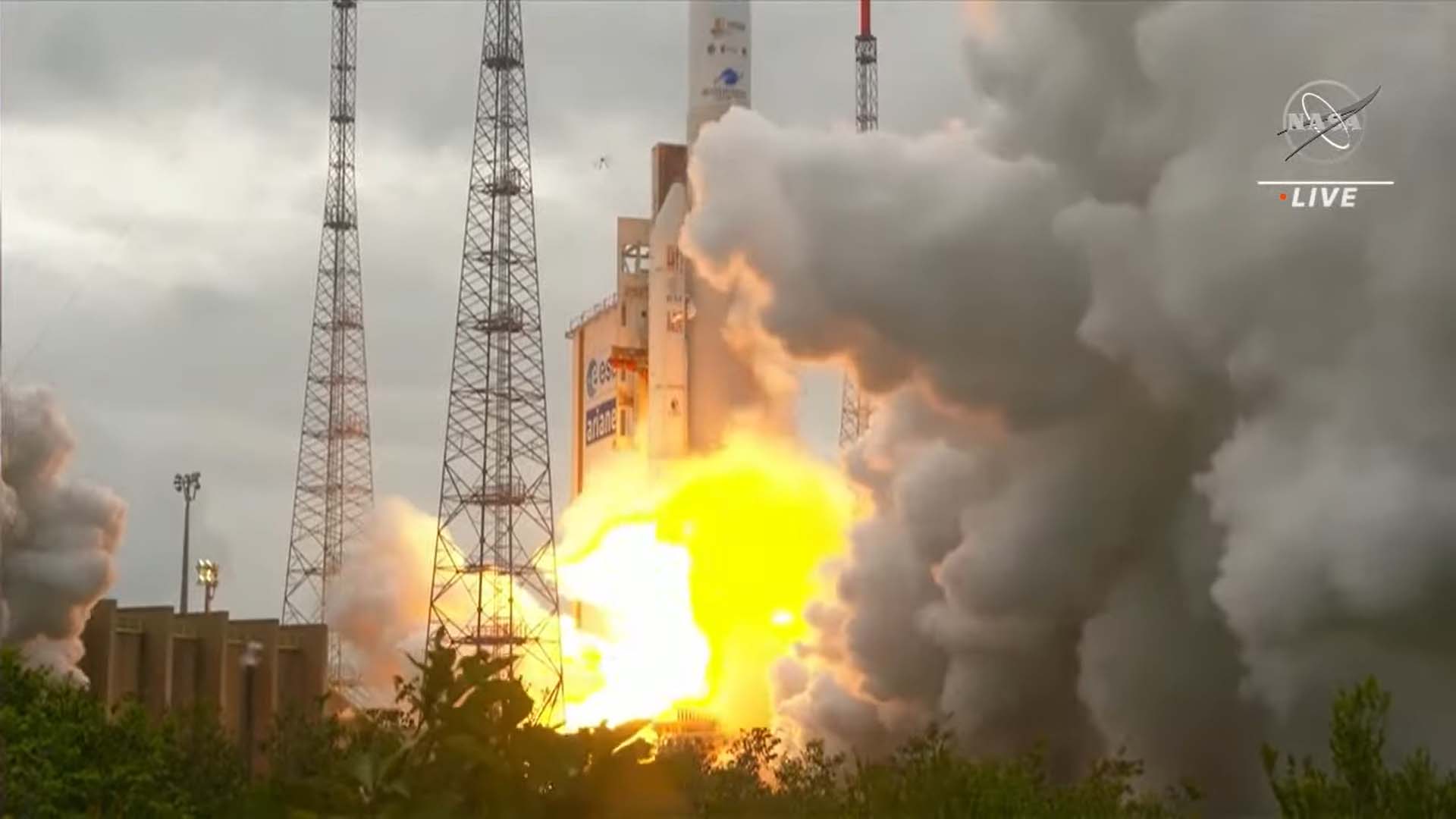 Dec. 25 — Following a flawless launch today at 7:20 a.m. EST of the James Webb Space Telescope from the Kourou Space Center in French Guiana, Greg Robinson, NASA Webb program director told a press conference: “The world gave us this telescope, and today we give it to the world.” Indeed, the building and crafting of this precision instrument has involved over 10,000 people from over 14 countries, working together over 25 years.

NASA tweeted, “We have LIFTOFF of the @NASAWebb Space Telescope! … the beginning of a new, exciting decade of science climbed to the sky. Webb’s mission to #UnfoldTheUniverse will change our understanding of space as we know it.” Using optics that can see in the infrared spectrum, this new “gift” to humanity will examine every aspect of our cosmos history, including a look at first galaxies formed 13.5 billion years ago, as well as the atmospheres of exoplanets, and hopefully answer questions about how planets formed and evolved. It also will observe the supermassive black hole at the center of the Milky Way. The Webb telescope is “unequaled in size and complexity,” the Indian web daily NDTV reports. To give the reader a sense of Webb’s magnification power, “#JWST can see the heat signature of a bumblebee in the distance of the moon,” Dr. John Mather Senior Project Scientist on the James Webb Space Telescope, Tweeted.

During the next “29 days on edge” the Webb will perform a series of complex tasks to ready itself for gazing into the deep space of our Universe. On day three its five-layer sunshield will begin to unfurl. It is “the size of a tennis court,” CNN reports. By day five the sunshield is expected to fully deploy, a process using 107 release mechanisms. Then two weeks into its flight the primary mirror will deploy, and its 18 hexagonal mirrors are to align into “precise positions using 126 actuators,” Florida Today reports. Once all the readying tasks are done, Webb will fire its thruster to travel to its destination, nearly 1 million miles from Earth.

Reflecting the “simultaneity of eternity” and man’s role in developing the Universe, it is noteworthy that the Webb telescope’s destination is what is known as the Lagrange 2 point. Its new home is so named after Italian-French mathematician Joseph-Louis Lagrange who in 1772 discovered five unique points of equilibrium between the forces of gravity of the Sun, Earth and the Moon. This L2 point will allow for the Webb to remain in an orbit with Earth, the Sun and the Moon on the same side as its solar shield while being close enough to Earth for communications. Webb project scientist Klaus Pontoppidan pointed to the lasting import of this “gift” when he said, “Webb will probably also reveal new questions for future generations of scientists to answer, some of whom may not even be born yet.”