The architects of modern day “environmentalism” couldn’t care less about the climate, let alone rainforests, whales, or whatever other popular momentary crusade they wage. Environmentalism was actually engineered as a tool for population control and geopolitical aims, and is in fact a seamless continuation of the eugenics movement made infamous by Adolf Hitler and the Nazis. Nazism, eugenics and environmentalism were all made in London—by the House of Windsor, its financial houses in the City of London, and its global intelligence network— the modern British Empire. So when the rallying cry of “Climate!” resounds from the halls of the World Economic Forum in Davos by billionaires taking their cue from London, it is essential to understand that their cry is actually one for genocide and war. Today, their war is directed at China, Russia and other nations collaborating on a new paradigm of economic development, rather than accepting the British imperial diktat known as the “Great Reset” and its associated “Green New Deal,” which intends to collapse production globally to kill off the useless eaters by the billions.

The British Empire’s specific target is China’s Belt and Road Initiative (BRI), the greatest infrastructure and development plan the world has ever seen, with participating nations that make up over 65% of global population and 40% of the world’s GDP. While China may have formally launched the BRI in 2013, with Xi Jinping’s announcement of the Silk Road Economic Belt and the 21st Century Maritime Silk Road, the seed crystal of the idea had been planted decades earlier by Lyndon LaRouche and his wife Helga Zepp-LaRouche as the Berlin Wall began to crumble. The LaRouches knew that the only way to bring down the British Empire and its Malthusian agenda, was to bring the world together—east and west—around a vision of economic development that would spark a worldwide renaissance. Rather than accepting China’s offer of collaboration on the BRI in the wake of the financial crisis of 2007–2008, the British Empire launched their quantitative easing (QE) policy and the geopolitical containment of China and Russia— a replay of the hyperinflation and geopolitical operations that led to World War II.

At the same time, the silent pumping of billions of dollars into their climate hoax agenda over decades accelerated with the 2015 COP21 Paris Agreement, where London would issue their demand that nations slit their throats by collapsing energy and raw material production. The climate agenda was so crucial for British geopolitical designs, that when President Donald Trump announced his decision to pull the United States out of the Paris Agreement, the UK House of Lords Select Committee on International Relations issued their report, “UK Foreign Policy in a Shifting World Order,” citing that action as jeopardizing the US-UK “special relationship” of intelligence and strategic collaboration. It should then come as no surprise that one of the Biden Administration’s first acts was to rejoin the Paris climate agreement, as part of its attempt to restore that special relationship. The use of the climate hoax for the geopolitical aims of crushing the new paradigm exemplified by the BRI has now culminated in the “Great Reset,” the name of the 50th annual meeting of the World Economic Forum (WEF), held in June 2020. The Great Reset was a further iteration of the “regime change” program that London’s BlackRock pronounced on behalf of the City of London at the August 2019 Jackson Hole meeting of central bankers, which demanded that central banks impose a dictatorship by controlling credit policy and using electronic currency to impose the Malthusian green agenda of global population reduction.

To combat this insane drive towards a new dark age and geopolitical confrontation that could lead to potential nuclear annihilation, Helga Zepp-LaRouche initiated the report, “The Great Leap Backward—LaRouche Crushes the Green New Deal,” published by The LaRouche Organization (TLO). The TLO report covered the truth about the British monarchy’s role in creating modern day environmentalism, especially the role of Prince Charles. As heir to the same House of Windsor that supported the fascism and eugenics of the 1930s, Charles continues the mission of his father, the recently deceased Prince Philip, who founded the World Wildlife Fund (World Wide Fund for Nature, the WWF) in the early 1960s along with Prince Bernhard of the Netherlands, who was a card carrying member of the Nazi party from 1933–1937. The report goes on to detail Charles’s role in organizing the anthropogenic climate change hoax, which is at the core of the World Economic Forum’s “Great Reset.” 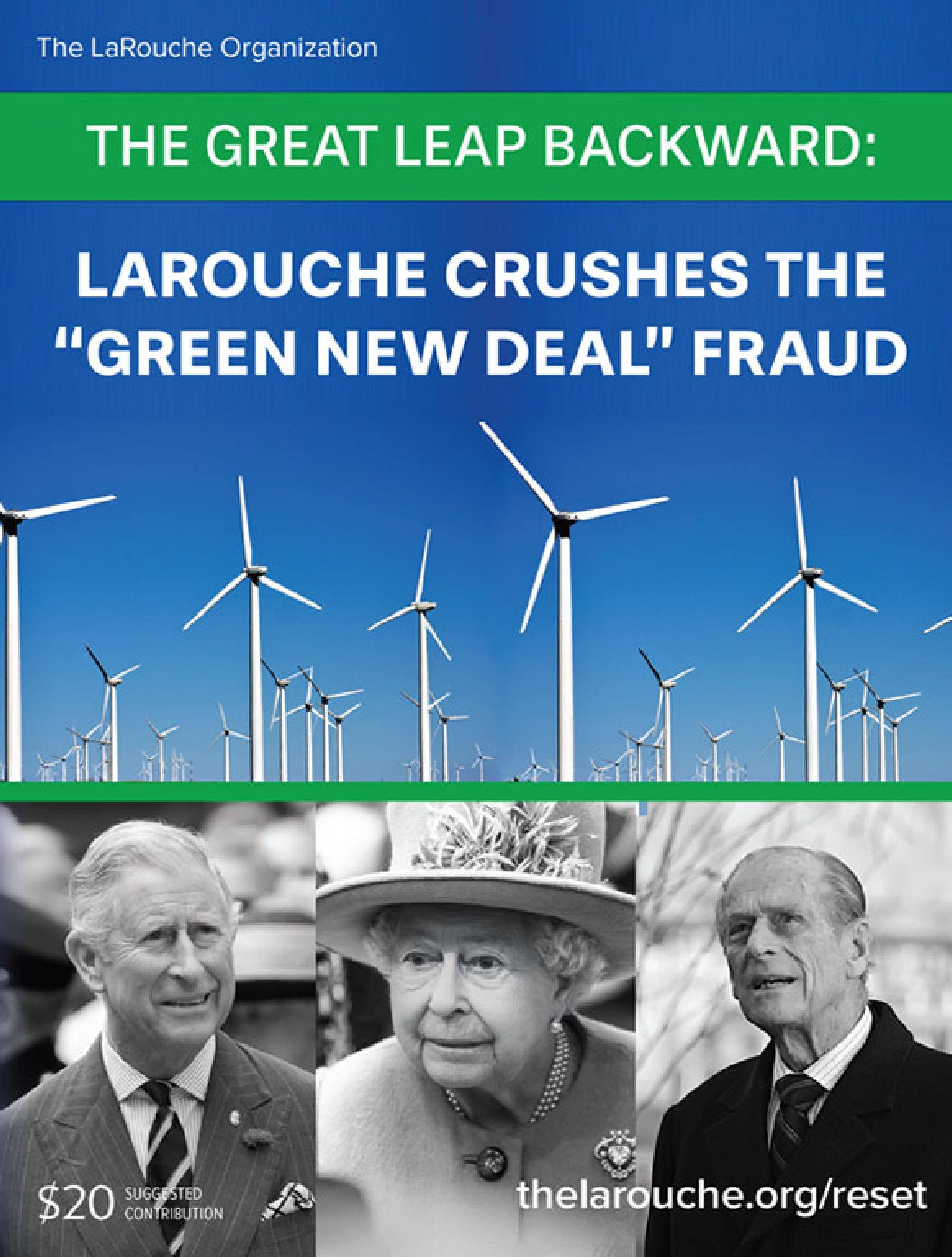 As part of the Great Reset agenda, the London centered banking cartel issued their “Principles for Responsible Banking” at the September 2019 UN meeting, where the top 130 banks collectively holding $47 trillion in assets (one third of the global banking sector) would withhold credit to carbon-based economic activity. The TLO report highlights the City of London’s role in preventing this type of “carbon-intensive” development, especially in Africa and Asia, as well as their targeting of food production and consumption. To enforce the agenda of the Great Reset, the British directed Military Industrial Complex is aligning military policy at NATO and the Pentagon to force nations into compliance at the end of a nuclear tipped bayonet—especially China and Russia, who may be giving lip-service to climate change, but are pursuing a global development program through the BRI, as well as clean coal and nuclear power plants, both domestically and in other nations. Since the publication of the TLO report, NATO has now published their “NATO Climate Change and Security Action Plan” for 2030, which cites the “opening up of new shipping lanes” and “desertification” as geopolitical concerns—an obvious reference to the BRI’s expansion into the Arctic, and the development policies in Africa.

The year 2030 referenced in the NATO Climate Change and Security Action Plan is the next major target year for the British green agenda and is also the year chosen by the United Nations “Agenda for Sustainable Development.” It is also the year represented in the Biden Administration’s “30x30” policy—30% of all federal land and water taken out of use for agriculture, grazing, forestry and fishing by 2030. Lawsuits have been filed in over a dozen states by their attorneys general challenging the Biden Administration executive orders on the Keystone Pipeline, drilling in the Arctic and other elements of the 30x30 agenda. Citizens’ groups are also activated— as of early June, nearly 50 counties in 11 states, from Montana to Texas, have passed resolutions against 30x30, with still more pending a vote. In May, bills titled the “30x30 Termination Act” were filed in both the U.S. House of Representatives and Senate. The TLO report has been crucial in catalyzing this fight in the United States, as part of building a global anti-Malthusian resistance movement.

In the days ahead, leading into the “2021 United Nations Climate Change Conference” (COP26) in Glasgow, the British are intensifying the psychological warfare around anthropogenic climate change, using their claims about droughts, floods and blackouts to make their case. The TLO report has been essential for combatting this psy-war from the standpoint of “know thy enemy,” but also combatting the “climate” lies by showing that a full understanding of climate requires taking into account solar activity, embedded in larger galactic cycles driven by cosmic radiation. However, the cataclysmic effects of droughts and floods have little to do with an ever-fluctuating climate, and almost everything to do with a lack of development. Had the Kennedy era North American Water and Power Alliance been built in the 1960s, and its associated nuclear powered desalination projects constructed, then droughts, floods and blackouts would not be occurring in the western United States. If it were not for the European Union’s zero-growth economic policies, symbolized by Germany’s “Black-Zero” austerity program and the implementation of green policies such as removing dams for the sake of fish, then the recent heavy rains would not have brought devastating flooding.

The report you now hold is the required antidote to this insanity. What is needed for humanity now are the policies, and more importantly, the way of thinking that Lyndon LaRouche developed in his science of physical economy—an approach resonant with the ideas of Vladmir Vernadsky, who identified the relationship between the noosphere of human creativity and the biosphere. LaRouche identified in his “Earth’s Next Fifty Years” that the ideas of Vernadsky would be essential for a new dialogue of cultures to replace the failed “clash of civilizations” of British geopolitics over the last half century. This approach is also resonant with what Helga Zepp-LaRouche has identified as the “Coincidence of Opposites.” This is the basis for pulling together a global anti-Malthusian resistance movement where economic development is the path to peace.