Conquering Inflation and Depression with Glass–Steagall and Development

The American System of economy began with Alexander Hamilton’s bold statement to the first Congress, that the source of economic value is, not landed property, not “free trade” as British economics teaches, but human invention, the unique creativity of the individual human mind.

Therefore it is important to understand that there was a fundamental change in the worldwide economy, for the worse, in 1971. Until 1971, Roosevelt’s Bretton Woods monetary system created constant demand in the United States and European economies for more investment in capital goods and new infrastructure, skilled labor, and family farm production; it blocked international capital from speculating across borders. After the 1971 fatal decision by Nixon to break the U.S. dollar from the Bretton Woods gold reserve, the floating-currencies system that replaced it incentivized and drove speculation, and investment in speculation, above all. 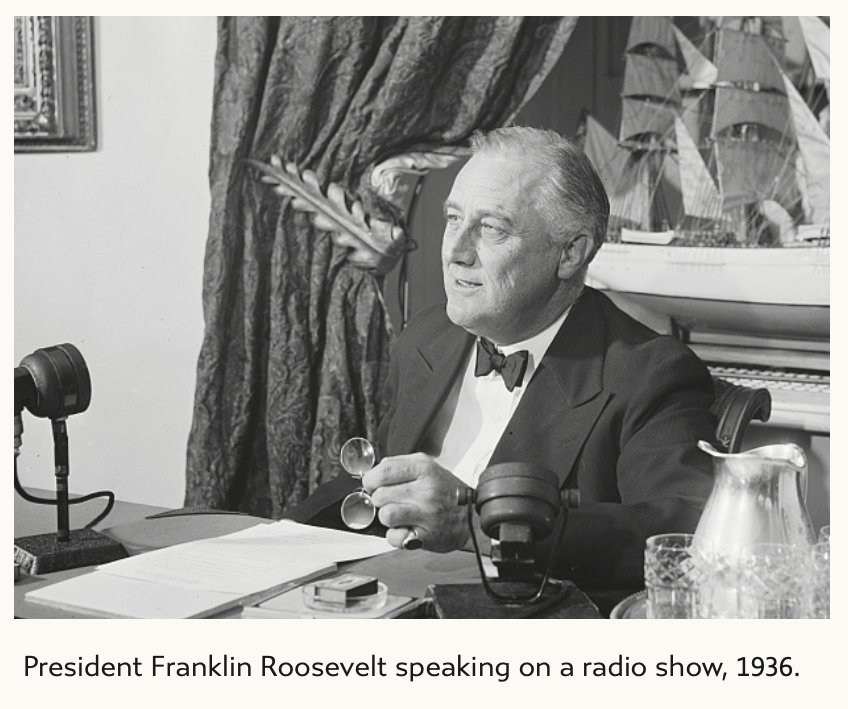 And with the abandonment of FDR’s Bretton Woods gold-reserve credit and monetary system, starting with the “Great Inflation” of the 1970s, every measure of the productive American economy—real wages, labor productivity, investment in infrastructure, the employment share in industry and manufacturing, and many others—began a decline which has not let up to the present day.

From the mid-1980s, the stagnant economy, losing industry and productive jobs, was hit by the deregulation of banking and finance, modeled on the British “Big Bang” deregulation of 1986. The banking regulations of the 1933 Glass–Steagall Act, which kept commercial banks honest lenders for 60 years, were eliminated one-by-one by the Federal Reserve until Glass–Steagall itself was repealed in 1999. From the mid-1980s on, America lived with financial bubbles followed by financial crashes, followed quickly by even bigger financial bubbles and bigger financial crashes, until the U.S. real estate mortgage securities bubble triggered the global financial blowout of 2007–08.

Since 2008, the Federal Reserve’s perpetual money-printing to bail out Wall Street has produced the biggest debt bubble in economic history, often called the “everything bubble” as every area of economic life has been piled high with debt securities and derivatives. Now at last this has led the United States to the threshold of hyperinflation.

The period of hyperinflationary pressure we are now experiencing has been created, not by a so-called “pandemic recovery”, but by decisions and actions of the major central banks under what they started calling their “regime change” in the Fall of 2019, before the COVID pandemic.

Figure 1 is the infamous inflation in Germany in 1922–23, known as the “Weimar hyperinflation.” This is the German reichsmark against the U.S. dollar, in the right hand column: from a few hundred reichsmarks to a dollar, to many trillions to one, in that 18-month period. Households’ wealth, workers’ earnings were wiped out. The German central bank did this unintentionally, but deliberately, by printing money to try to hyperinflate away Germany’s debts from World War I and reparations payments. 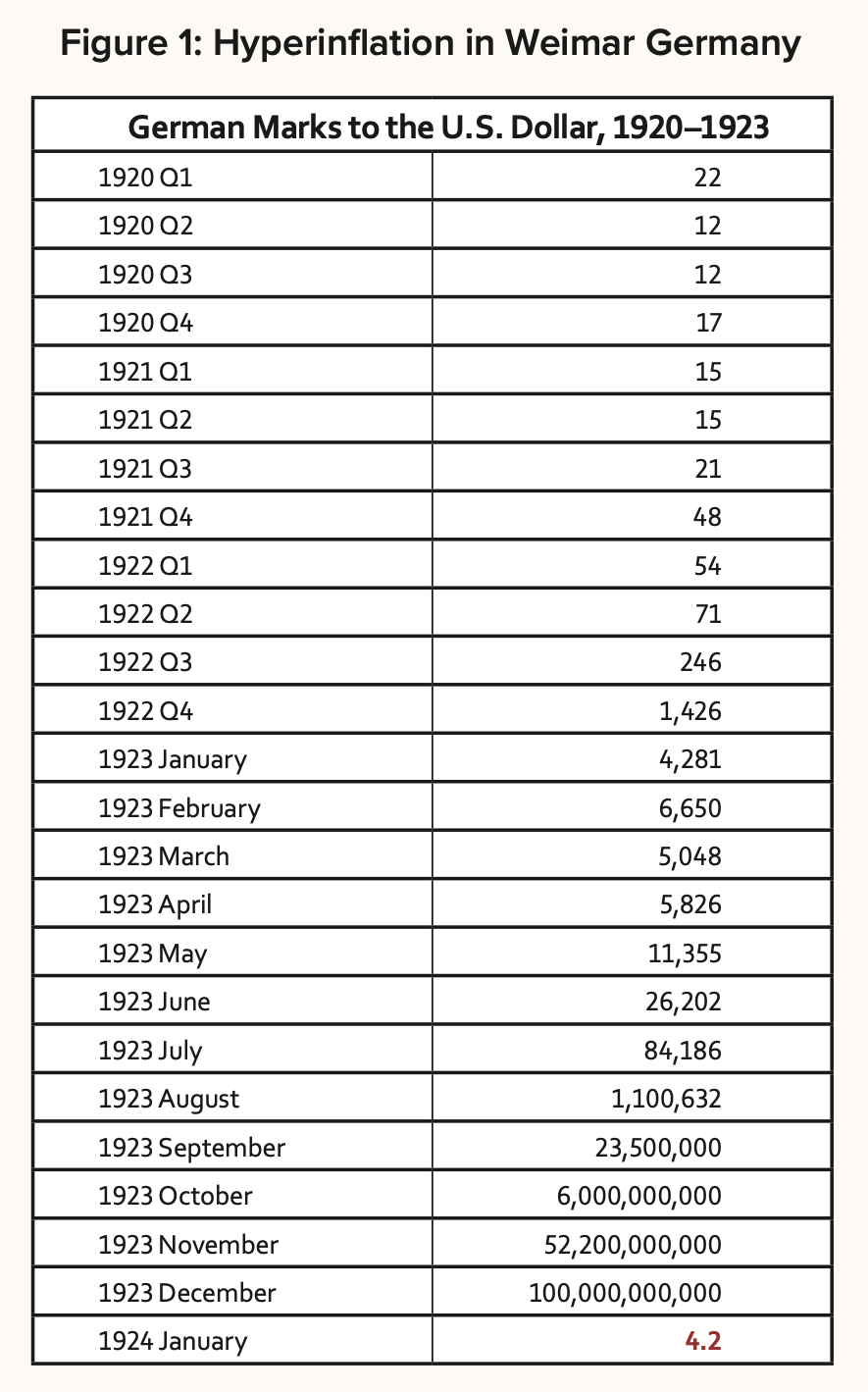 At the end of 1923 a man named Hjalmar Schacht took over the central bank, the Reichsbank. Schacht used a large international loan organized by the House of Morgan to remove the foreign payments pressure. He used the introduction of a new currency, which Schacht made extremely scarce, to suddenly kill the inflation—for the next ten years. Schacht and the government used extreme shortage of currency to impose brutal economic austerity, defeating all proposals to add any productive credit to the economy. Germany’s unemployment rate was 12% before the 1929 collapse.

So hyperinflation is, indeed, “transitory”, as our current central bankers insist—they may wind up ending it abruptly with its opposite, deflation, with murderous results.

In the United States and over most of Europe, after World War I, the regulation of commercial banks was dropped. Big commercial banks were allowed to take over investment banks and form stock-speculation trusts, and bank holding companies were allowed to own investment banks as well as what we call today “shadow banks” of all kinds. They became what are called “universal banks.”

The Federal Reserve made liquidity loans to these “universal banks,” and even bought securities from them—quantitative easing!—in 1923–24 and in 1927.

These banks brought on the stock crashes and bank bankruptcies of 1929–33.

The Solution Starts with Glass–Steagall

Franklin Roosevelt’s Glass–Steagall Act of 1933 was the solution to those four years of bank bankruptcies. In the United States, the commercial banks were reorganized with their speculative securities washed out and written off, in Roosevelt’s Bank Holiday of March 1933. That reorganization was made permanent by the Glass–Steagall act three months later.

Lyndon LaRouche said in 2010, after the crash which he had tried to prevent by promoting the restored Glass–Steagall Act in Congress:

Then, we have to create a new system of credit, and in creating a new system of credit, we have to go to a fixed-exchange-rate system among the nations which participate in the reform. By going to a fixed-exchange-rate system, we can maintain basic borrowing costs in regular loans, of 1.5% or something like that at a base rate.

We can then, and must, adopt a perspective of about two generations, about 50 years, of rebuilding the world economy. The emphasis in the beginning, because we’ve destroyed so many industries and so much agriculture—the tendency will be to go to infrastructure programs. Like mass transportation, for example rail, maglev systems; improvements of water systems, as well as mass transportation; to a much expanded emphasis on nuclear power as a source of power; to improvements in municipal systems. 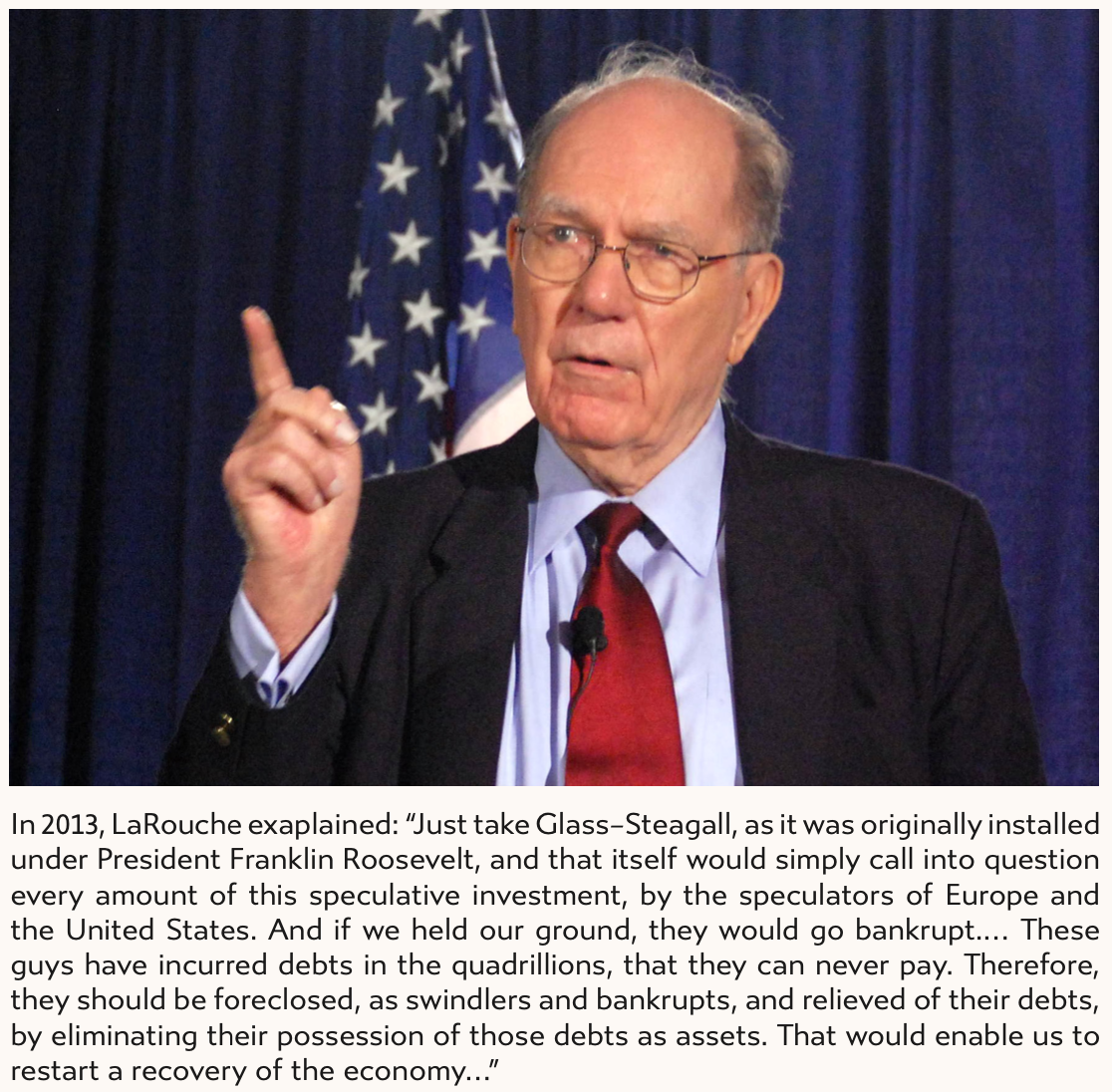 The “universal banks” that caused the 1929–33 crash, banned by Glass–Steagall for half a century in the United States and much of Europe, came back with a vengeance from the late 1980s. After London’s “big bang bank deregulation” of 1986, the regulators allowed universal banking everywhere. Today it is banned only in China.

Even after the 2007–08 financial crash, the solution was rejected: LaRouche’s Glass–Steagall solution, breaking up the universal bank holding companies and writing off their worthless securities—as well as banning home foreclosures while this was done. Instead the central banks began coordinated, massive money-printing to keep these universal banks liquid as their bets went bad, and supposedly give them enough reserves to survive their next crash.

Figure 2 shows the claimed assets of the four biggest Wall Street universal banks combined—a big expansion during and after the 2008 crash they caused, then continuing growth, to monstrous size, while being fed by the “quantitative easing” money-printing of the Federal Reserve.

This is all only the prelude to what started in Autumn of 2019, what the central bankers themselves called the “regime change”, and which is about to blow out now.

Money-Printing Has Made Zombie Banks

In August of 2019 central bankers met at the Federal Reserve’s annual Jackson Hole, Wyoming conference, and discussed a proposal by former central bank leaders from four countries, now all executives at BlackRock, Inc., the world’s biggest financial firm. They called it “regime change”: It was time, they said, for central banks to take control of spending powers from governments. The conference also discussed a presentation by Bank of England head Mark Carney, “Mr. Zero Carbon” of central bankers, who said the central banks would have to create a synthetic world reserve currency to replace the U.S. dollar. The reason for both proposals: The central banks must finally succeed in their ten-year mission impossible, after the 2008 crash, to set off inflation. They must create huge amounts of consumer demand, by printing money and directly getting it out, as if by dropping it from helicopters.

In fact, whatever volume they printed was doomed to be largely absorbed into new financial speculations of the biggest Wall Street and London firms.

But the regime change went ahead, beginning with the Federal Reserve’s resumption of quantitative easing in early October 2019, followed by the European Central Bank.

There was no pandemic yet in sight.

Figure 3 describes the scale of that late 2019 acceleration in trans-Atlantic central bank money printing through the universal banks. 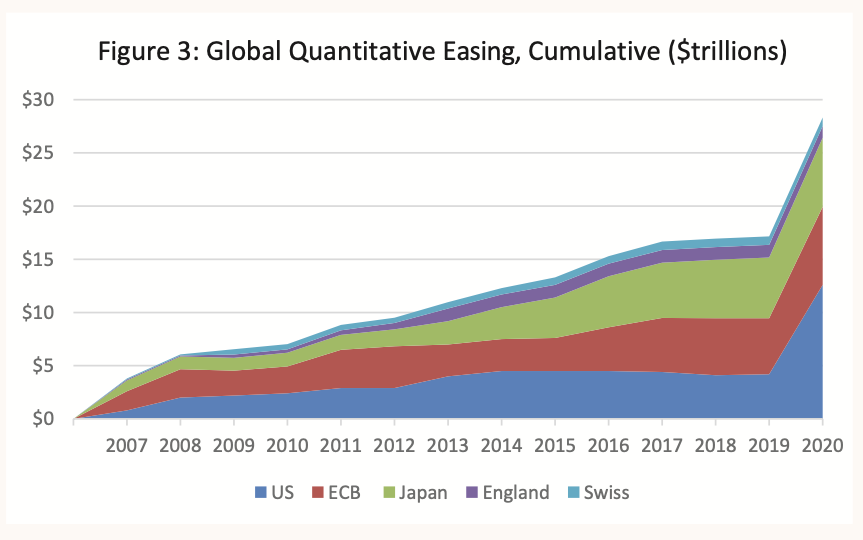 But look at loans and leases—no change! Just like the 1920s, the megabanks are getting monstrously bigger in deposits and assets, but not lending.

The central banks have created huge “undead” universal banks, which essentially cannot fail—because the central banks will not allow them to fail no matter how much of their assets blow out—but also cannot lend.

This must be stopped and reversed. Glass–Steagall reform, as Lyndon LaRouche understood, is the weapon to stop it: a Glass–Steagall break-up of these banks in Wall Street, the City of London, and in every nation.

Figure 5 shows assets of the Federal Reserve itself. This graph, although recent, can’t keep up; the Fed’s asset book was over $8.3 trillion in September 2021—10 times its size in 2008. Again, look at the sudden shift and acceleration in late 2019—the start of the “regime change.” 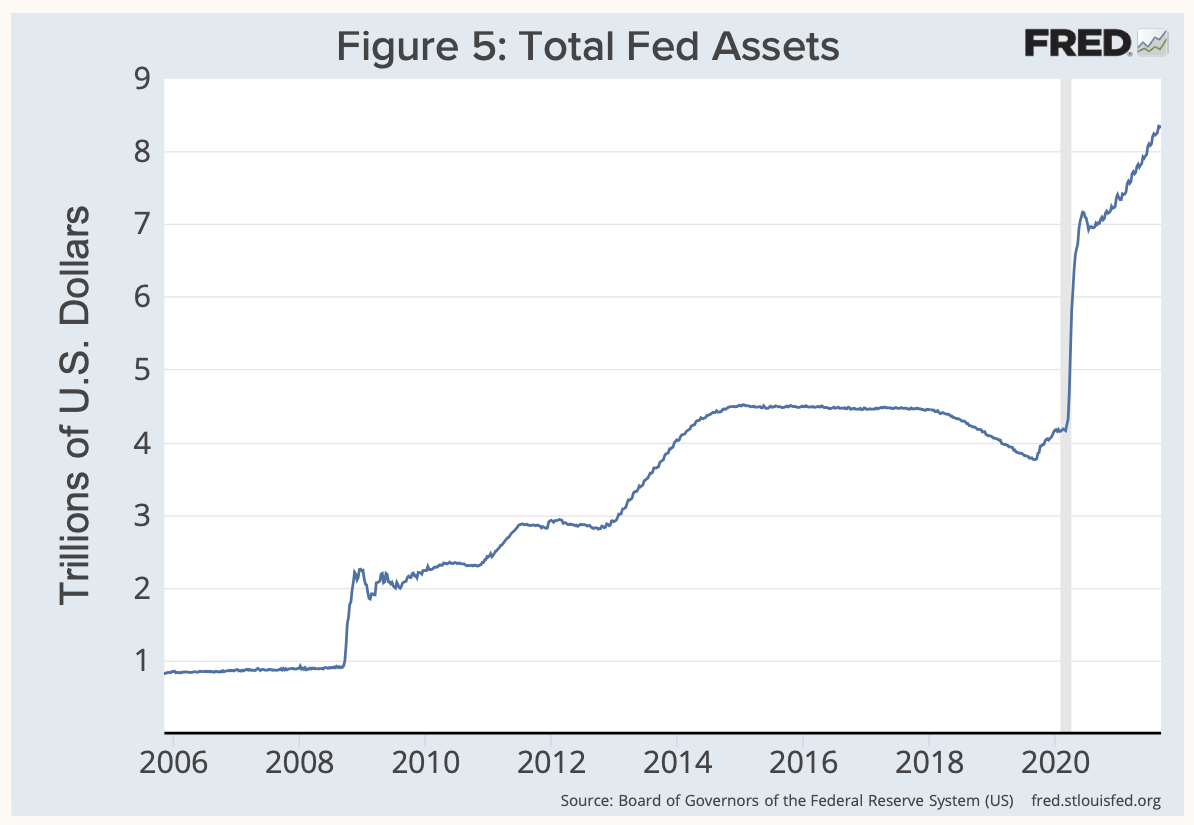 This, too, must be stopped—unwound. Nationalization of the Federal Reserve to create a national credit institution for productivity and productive employment, is the way to do that.