July 18—Independent family farming in the U.S., Europe and other high productivity farm belts is under assault, at the same time that 40 million people face starvation this year worldwide—the largest famine threat in history. These emergencies have the same root cause: a failed monetarist/cartel system—a neo-British Empire, dominating trade, agriculture, and food. Reasserting sovereign national responsibility and power over fundamentals of production and the means to life, will not only end the crises, but guarantee future food in abundance for billions more people to come. With space-age science, infrastructure, knowledge, steady income and support to independent family farms of all types and sizes, there is no such thing as limited resources, and no excuse for scarcity and hunger.

The immediate task is for the major powers to collaborate on food relief to the 270 million people worldwide who are totally dependent on aid, with emergency rations for those in extreme want. Farm leaders and experts on commodity processing and logistics can figure how to make the best use of available stocks (taking into account what that means for production priorities in the coming planting, harvesting, and livestock cycles) and how to ensure that farmers are fully supported to stay in operation. While carrying out this relief mission, we can set in motion the fundamental changes to restore independent family farming.

Break up the “Big Food” cartels. This year is the 100th anniversary of the U.S. Packers and Stockyards Act, whose principle was regulation and trust-busting of the monopolies then dominating meat, to protect the interests of farmers and eaters. That principle was abandoned over the past half century of casino economics, but now needs to be reasserted to break up today’s monopolies that have consolidated control in all areas of food, from retail, to processing and trade in meat, dairy, grain, fruits, vegetables, oils, etc. Hedge funds and Wall Street Big Money dominate food chains from start to finish. A special priority is to nullify the Jeff Bezos–Bill Gates sweetheart deal with NASA for the billionaires to use space food technology to corner the market for lab-produced protein against livestock producers. 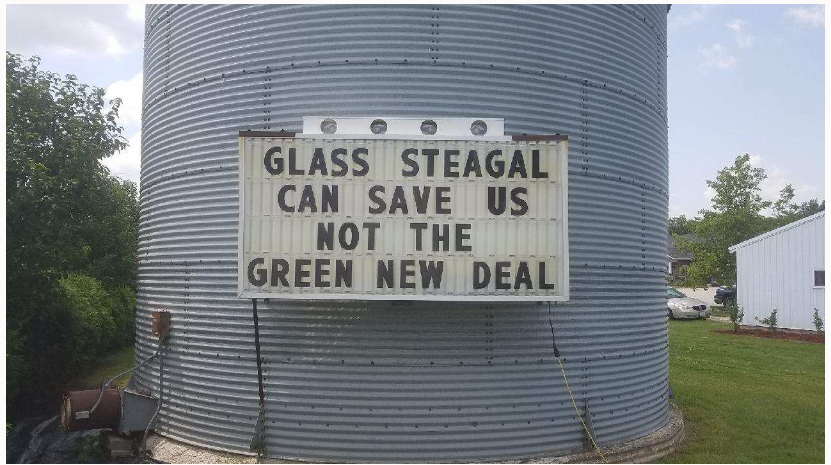 There are plenty of precedents and parallels for anti-trust action, including the necessity to break up Big Tech. What is essential to make anti-trust action work in agriculture and all forms of production, is to reestablish the Glass–Steagall Act to end the mega-banking consolidation, as described earlier in this report.

To stabilize farm incomes, we must re-establish the principle of parity pricing of food commodities for farmers, and stop the free-for-all speculation in farm and food goods. “Parity” refers to the policy of guaranteeing that the farmer receives prices for his output that cover the costs of production, plus a decent profit, which serves the purpose of securing the current and future food supply for the nation, as well as giving farm producers an income on a par with skilled workers in other sectors. This was first made U.S. law under the Franklin D. Roosevelt Administration. The U.S. Department of Agriculture (USDA) and other Federal authorities have many mechanisms to implement parity pricing—whose 1943 calculation is still done according to the 1930s law, still on the books. These mechanisms include floor prices, government purchases, national reserves and similar production management. We must roll back the 2001 Commodity Futures Modernization Act and other laws which legalized gambling in farm inputs and food.

Finally, re-assert sovereign national interest over private claims to ownership of the means to life. Beginning in the 1970s, when biotechnology gave breakthroughs in yields from excellent advances in crop traits, e.g. tolerance for herbicides, drought, freeze, etc., agro-chemical cartels, especially from Britain, succeeded in warping U.S. Patent Law. For the first time ever, industrial patents were granted to life-form innovations (human, as well as plantlife). This led to decades of cartel price gouging, domination of seed markets, trait-licensing control over research, and harassment and ruination of farmers. It is time to re-open the policy question of how to compensate innovation, without allowing domination of the means to life and research. This is made more urgent by the unfortunate instances of U.S. courts and juries now making technical decisions on agro-chemicals and biotechnology, outside their competence.

As fast as possible, phase out the current patterns of cartel-dictated agriculture production, food processing, and trade. Large areas of the United States serve as monoculture sources for crops for export by the mega-transnationals. The U.S. alone accounts for over one-third of the world’s corn harvest. Brazil is a cartel source for beef exports. At the same time, other areas—like most of Africa, have been forcibly kept undeveloped and food-short by the IMF, World Bank and related neo-colonialist institutions, so that the African continent as a whole is 40 percent import-dependent for basic grain staples.

These politely-termed “global sourcing” patterns are enforced by the World Trade Organization, which must be disbanded, in favor of sovereign nations working bilaterally or otherwise, to determine their own mix of crops, livestock, processing, and trade and land use patterns. The U.S., for example, can “bring back home” the food production outsourced to South America, Asia and Africa, to the benefit of these locations shifting to supplying their own needs, and markets of their neighbors. The scale of the shift to global sourcing is seen in just a few examples: The U.S. imports 25% of its fresh fruits consumed; 23% of fresh vegetables; 55% of fruit juices; 80% of processed mushrooms; 65% of seafood, (85% if we include U.S. seafood sent abroad for processing, then shipped back) and so on.

Even before the pandemic, the world already had over 800 million people chronically short of food. The rough goal is to double world food production. This will provide for sufficiency for all, carryover and stocks. A useful metric is per capita yearly grain (of any kind) production. For example, a good target is 60 percent of a metric ton produced per person per year (visualize 56 bushels of corn). This covers both direct human consumption and indirect consumption (through the livestock chain), plus processing, spoilage, reserves, etc. By this measure, today’s 7.8 billion people require 4.7 billion metric tons of grain harvest (rice, wheat, corn, barley, oats, rye, teff, etc.). But actual present-day harvests are running in the range of 2.7 billion tons. There are obvious prerequisites to increasing production. To begin with, upping agriculture output relies on constantly improving conditions of basic infrastructure and farm inputs. This means building the priority projects for such hard infrastructure as electricity, water management, and transportation, as well as needed soft infrastructure, such as public health, hospitals, education, culture. For farming, besides the long overdue NAWAPA (North American Water and Power Alliance), other improvement projects need completion and upgrades, including the Missouri Basin “Pick–Sloan” water, power and flood protection plan, and the Upper Mississippi water management program. The entire Ohio–Missouri–Mississippi navigation system needs to be fully upgraded. Flood defenses are lacking in thousands of farm counties.

On inputs, agricultural productivity requires modern technology of all kinds: mechanization, GPS, drones, chemicals—both synthetic and “natural,” high-yield seeds, livestock and fish genetics, and so on. 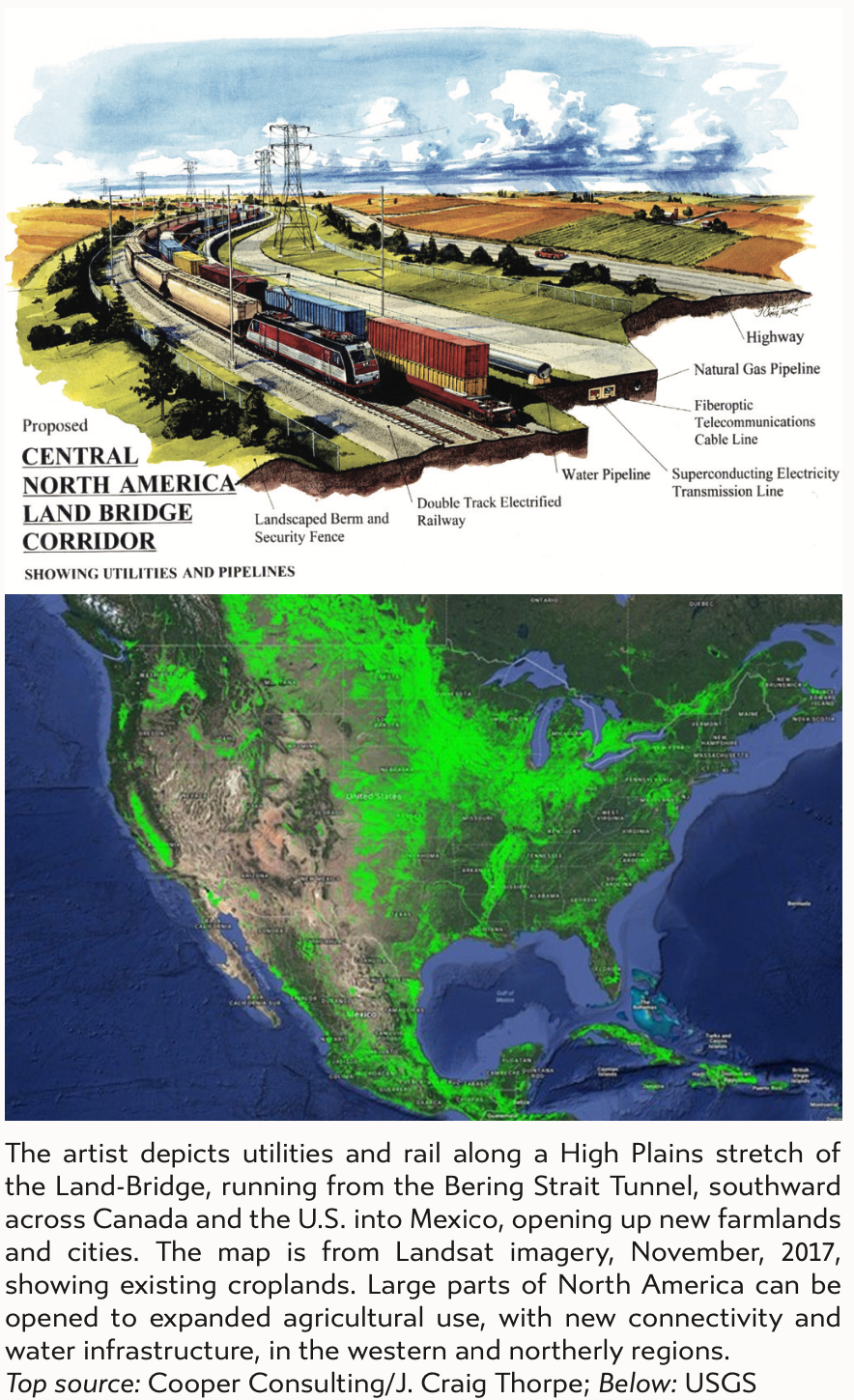 Land area is likewise in the same category of being an expandable input, not a limited resource. For example, with large scale water projects like NAWAPA, land area for agriculture in North America would increase by more than 15 percent. Under the current estimate of the world’s unused arable land, half of it is in Africa. What potential could be unlocked with great infrastructure projects?

The ingenuity and mission-orientation of family farm members—with the living standard, independence, infrastructure, and science to go along—are the best guarantee of a nation’s food security. Our job is to re-establish the paradigm of traditional “American System” agriculture.

The crisis at present, is that the speculative financialization of agriculture has reached the point of extreme consolidation, and forced indifference to millions starving abroad. Of the 2.1 million farms in the U.S. (counting those 3 hectares in size and above), 10% of them produce 77% of the value of commodity output. The big operations are manned by labor pools, rather than stable extended family units with skin in the game. Ghost towns are now found throughout farm communities. One third of U.S. counties lost population between 1980 and 2010, mostly in farm states. And two thirds of rural counties lost population over 2010 to 2020. It’s a paradox that the U.S. has some of the highest level farm technology in the world, while social conditions are in sharp decline. It’s an irony that farmers rank the highest in polls of respected occupations, but they now suffer the highest rate of suicide of any occupation. 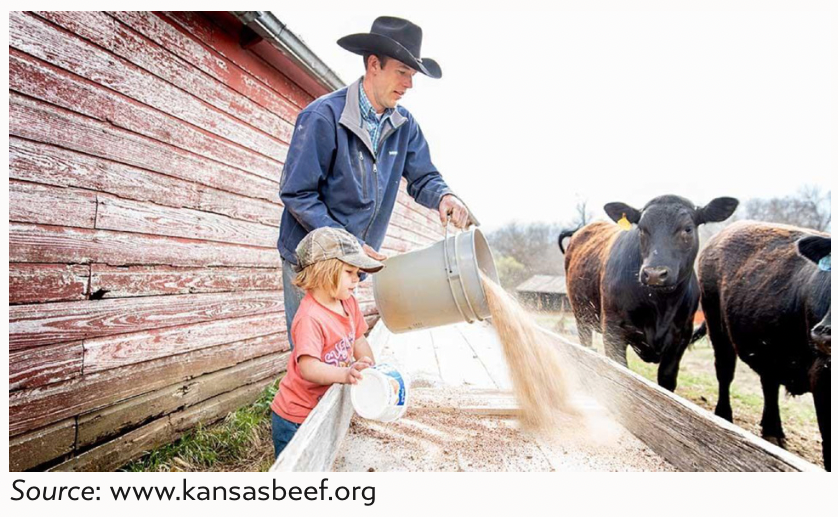 It gets worse. The very same evil networks which monopolized agriculture are now pushing the “green transition” to a new green deal and food system “reform,” where farmers forgo food production altogether, and switch to “nature-based” agriculture. They are to “enhance the environment” with trails, wilderness, “carbon farming,” wind power, etc. CO₂, which is plant food, is now the enemy. It is all green bunk, for the purpose of a financial bubble for Wall Street/City of London, and depopulation. This must be stopped. 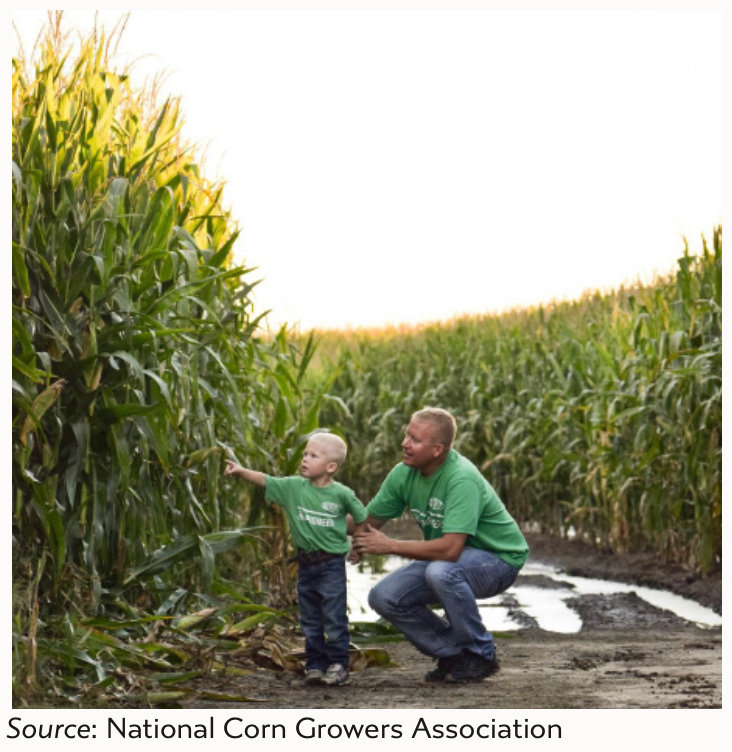 Through the many farm-supporting measures identified—antitrust bust-up of food trade and processing conglomerates, improvements in infrastructure, and Glass-Steagall banking reorganization, a million new family farms is a realistic proposition. Favorable inheritance tax laws are required as well, including such innovations as authorizing senior farmers to designate non-relatives to take over their farms, with tax and credit supports. More than one-third of all U.S. farmers are over the age of 65. The national average age for a farmer is nearly 58.

Along with new farms comes the prospect of new cities in rural areas, and rehabilitating abandoned towns and institutions—schools, churches, museums, cultural and science centers. The new rail corridors of development mean new hubs for rural industry, as well as expanded agriculture.

The history of agriculture is a record of successions of scientific discoveries and applications, from early domestication of plants and animals, to fertilizers, to the 20th century crop hybridization breakthroughs seen in the original Green Revolution, centered at CIMMYT, the International Maize and Wheat Improvement Center in Mexico, where Dr. Norman Borlaug, Dr. Sanjaya Rajaram and others produced high-yield results.

With plentiful energy and water, vast increases in food production are possible, through hydroponics and aeroponics, and also through controlled environment conditions, in extreme climates, such as in Alaska or deserts. 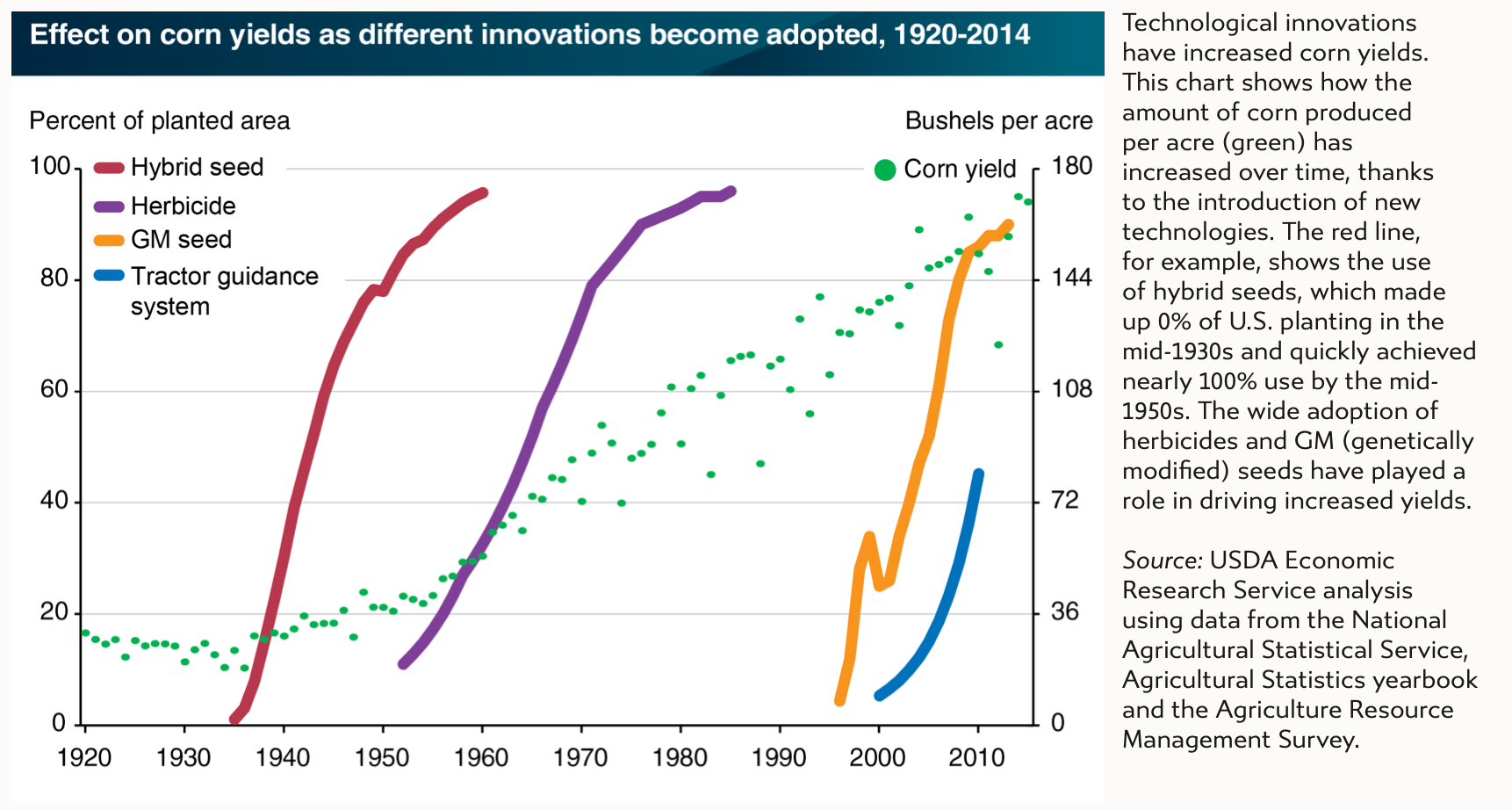 The process of increasing productivity is dramatically shown in U.S. corn yields over the last century, which rose sharply from the quick spread of innovations. Average annual yield soared from 20 bushels per acre (1,255 kg per hectare) in 1920 up to 180 bu/acre today (11,295 kg per ha.) That’s a 900% increase in yield!

Vast new increases in yields and food output will continue to come from successes in genetic mapping and engineering, as well as synthetic animal proteins.

Most urgent is to conduct basic research against plant and animal diseases, especially zoonoses—diseases which jump from animal to man. COVID-19 is in this category.

Bioengineered traits to improve corn, soybeans, and many vegetables are well known. CRISPR and related techniques enable engineering even the basic profile of crops. For example, there is the C₄ Rice Project, intended to boost yields by half through more efficient photosynthesis. Chinese scientists recently succeeded in fully mapping the potato, and producing a variety that can be grown by seed, instead of the traditional cloning method, which will boost yields enormously.

These biological achievements, along with space age technologies for precision farming using satellite data and guidance capacity, drones, robotics and many more advances mean that the modern farmer is an “astronaut farmer.”

All the more, the re-establishment of the American System of independent, family-scale agricultural operations will be the guarantee of plentiful food for the future, and the million new family farms will be the training ground for brigades of “astronaut farmers” to come.