End of an Era? The Futility of Endless War Sinks In 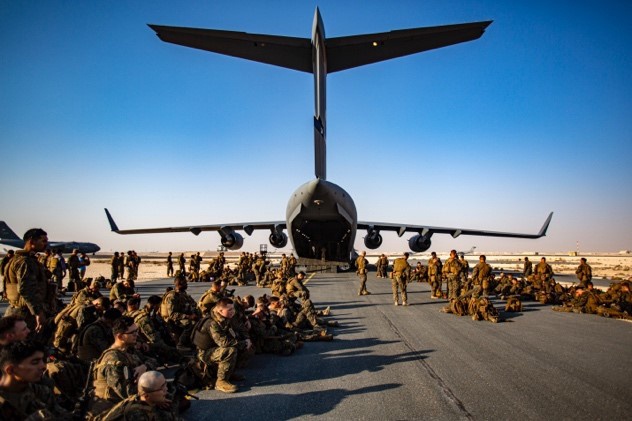 Sept. 3—On August 31, just hours after the last U.S. plane left the Karzai International Airport in Kabul in keeping with President Biden’s withdrawal deadline, he defended that decision in an address to the American people. “The decision about Afghanistan,” the President said, “is not just about Afghanistan. It’s about ending an era of major military operations to remake other countries.” Biden’s statement, if followed through, represents what the Schiller Institute’s President Helga Zepp-LaRouche called a “phase change in international politics.” Since the collapse of the Soviet Union from 1989-91, U.S. policy has been shaped by a triumphalism predicated on the belief that America was now the world’s only superpower.

Those nations which refused to surrender their sovereignty to the U.S.-led post-Cold War order were subjected to crippling sanctions and the denial of credit by international financial institutions. Acting with a hubris shaped by the belief that, in a unipolar world, America
could impose its will as it pleased, American officials, urged on by the British, and with  backing by their NATO allies, launched repeated regime-change wars against those who rejected the arbitrary rules defending the “western values” of the so-called Rules-Based Order (RBO). It was in defense of this order that the “endless wars” were launched, including the 20-year war in Afghanistan which ended this week.  In a separate comment on the end of the war, Secretary of State Blinken, who routinely hoists the flag of the RBO everywhere he goes, stated on August 30, “The military mission is over. The diplomatic mission has begun.” Though he was speaking about the removal of U.S. officials from Afghanistan, it seems that, in the context of Biden’s speech the next day, he could have been speaking about the end of a foreign policy in which launching destructive wars had replaced diplomacy. Whether this is true is not yet determined. Both Biden and Blinken continue to justify disengagement from the “small wars” in Southwest Asia as a necessary precondition to concentrate on the alleged threat from Russia and China, especially to fulfill the delayed “Pivot to Asia” initiated under President Obama.

The “end of an era” theme has been seized upon, by many who are critical of Biden for following through with the withdrawal from Afghanistan, to insist that on the contrary, the era must {not} end, America must {continue} deploying its military power to counter the alleged “malign, authoritarian intent” of Russia and China.
Ironically, Trump, who campaigned in 2016 on the slogan of ending the “endless wars”; who negotiated the deal with the Taliban signed in February 2020 setting the timetable for withdrawal; and then tried unsuccessfully to withdraw U.S. troops; has joined with his own most outspoken critics in attacking Biden, calling on him to “resign in disgrace.”War hawks among the anti-Trump crowd, such as leading neocons William Kristol and Rep. Liz Cheney, have called for Biden’s resignation or impeachment. A common theme of those in the Military- Industrial Complex, who profited outrageously from the wars, and who are already nostalgic for the “forever wars,” is that Biden’s action means the United States cannot be trusted to stand up for “western values” in the future.

This line has been pushed especially hard by key figures from the United Kingdom. Former Prime Minister Tony Blair, who should face a war crimes tribunal for his role in launching the wars in southwest Asia, attacked not only Biden but Trump, and the American public, saying that the decision was made “in obedience to an imbecilic slogan about ending ‘the forever wars.’”Going a step further was British Defense Minister Ben Wallace, taunting America by saying it is no longer a “superpower.” A superpower, he declared, “that is also not prepared to stick at something, isn’t probably a superpower either. It is certainly not a global force, it’s just a big power.”

The present preoccupation of the War Hawks and their sponsors from what former CIA analyst Ray McGovern calls the “Military-Industrial-Congress-Intelligence-Media-Academia-Think-Tank Complex” (MICIMATT) is advancing a military counterweight to Russia and China. This includes the push for NATO expansion, to incorporate Ukraine and Georgia in NATO; escalating the Color Revolution against Belarus; establishing a “Pacific NATO” to defend Taiwan and counter China in the South China Sea; continuing the regime-change drive against Syria with Caesar Sanctions and occupation of territory; continuing the war in Yemen; etc. Given the now-acknowledged failure of the 20-year war in Afghanistan, such a bold global agenda would be laughable, except that there are many indications of serious intent including statements in the last days by both Biden and Blinken on Ukraine and China.
Zepp-LaRouche insists that this agenda, based on British geopolitics, must be ended now. In posing the question, “What’s next?” she has put the Schiller Institute (SI) in the forefront of the mobilization for an alternative that represents a decisive break with the British geopolitical doctrine behind these wars. She has campaigned relentlessly for a shift to peaceful cooperation for economic development. In two recent SI conferences, one before and one after the fall of Kabul to the Taliban, a panel of experts was convened to discuss a development perspective, predicated on a mobilization of Afghanistan’s neighbors to support the extension of China’s Belt-and-Road Initiative into Afghanistan and Southwest Asia, with corridors of development, as the key to peace for the long-suffering war-torn region.*1 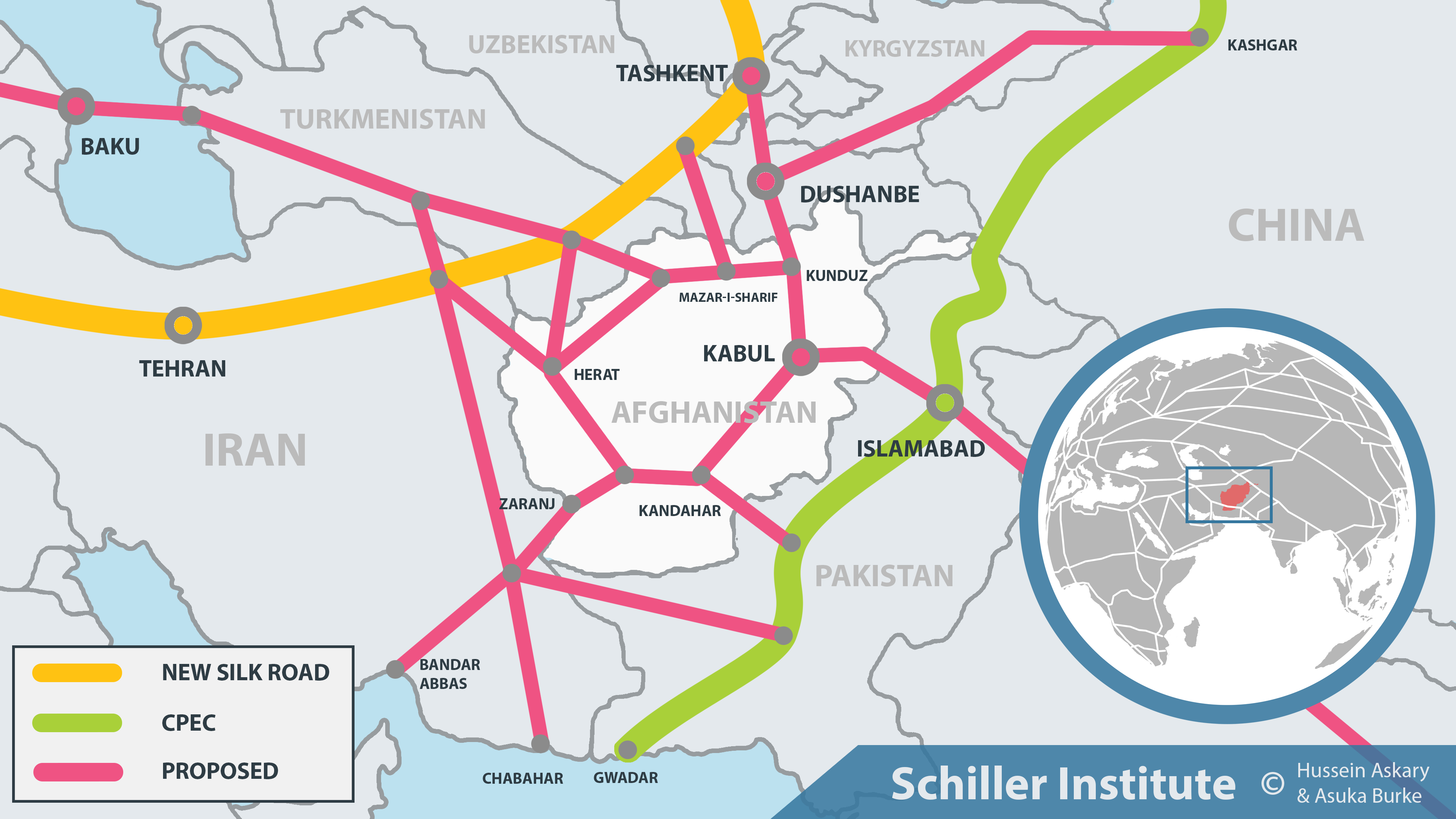 Proposed infrastructure connections linking Afghanistan to the Belt and Road Initiative. Development is the key to peace.

At the heart of the hysterical reaction against Biden’s decision is the fear that the “Special Relationship,” through which the City of London manipulated U.S. military and foreign policy to its benefit, has been broken. In his diatribe, Tony Blair whined that the decision to act without consulting the Brits poses the risk that the U.K. is being relegated “to the second division of global powers.” Others lamented that this dooms the fantasy of a new “Global Britain”; viz., Theresa May in Parliament, pathetically asking, “Where is Global Britain in the streets of Kabul?”

A better question would be, “Are there American leaders who, in recognizing the ‘end of an era,’ are prepared to break with the decades-long domination of U.S. policy by British imperial geopolitics?”
In his book, The Back Channel, published in 2019 before his selection by Biden to be Director of the CIA, long-time State Department official William J. Burns provides glimpses which demonstrate that he understands there is something profoundly wrong with the approach of the United States, which has led to endless wars.2 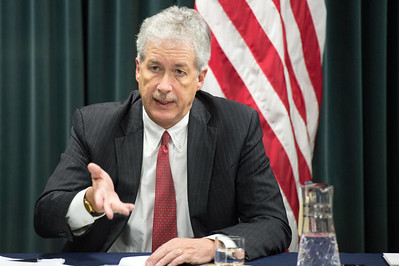 In the final chapter, after a fascinating look behind the scenes at his role as a “back channel” in negotiating the JCPOA nuclear agreement with Iran, he reflects on his career stretching back to the Reagan Administration, and the changes which occurred after the fall of the Soviet Union when U.S. officials adopted the role as the world’s unipolar power.

America’s unipolar moment was, by definition, temporary. Inevitably, our relative power would diminish as other players became wealthier, stronger, and more assertive. In the midst of these dramatic geopolitical shifts, some of which we accelerated with our own mistakes, we also lost our way in diplomacy. At first lulled by the experience of the post-Cold War dominance and then shocked by 9/11, we gradually devalued our diplomatic tools. All too often, we over-relied on American hard power to achieve policy aims and ambitions, hastening the end of American dominance, deepening the desire and capacity of our adversaries to upend the American-led international order, and disillusioning the American public. (p. 389)

After stating that diplomacy matters more than ever to American interests, as we are “no longer the only big kid on the block,” Burns writes,

The window for defining a strategy for a changing international landscape, and America’s pivotal role, is slowly closing—but it is by no means shut. That strategy will require a new compact on diplomacy, one that reinvests in diplomacy’s core functions and roles, adapt smartly to new challenges and realities, and reinforces the connection between leadership abroad and rejuvenation at home. (p. 390)

The militarization of diplomacy is a trap, which leads to overuse—or premature use—of force, and under-emphasis on nonmilitary tools.... In Iraq and Afghanistan, diplomats found themselves slipping into supporting roles in the military’s counterinsurgency strategy, preoccupied with local social engineering and the kind of nation-building activities that were beyond the capacity of Americans to accomplish. It sometimes seemed as if we were trying to replicate the role of the nineteenth century British Colonial service, not play the distinctive role of the American Foreign Service. (p. 394)

Does Burns’ astute comment that the failure of recent U.S. policy stems from following the British imperial model offer a sign that a significant change in U.S. policy orientation is not only necessary, but possible? Burns was in Afghanistan during the Aug. 14-31 evacuation, and met with a top Taliban official, which likely played a role in the Taliban’s cooperation with the evacuation.

But it would be foolish to sit back and hope that those in the official U.S. government institutions who have been integral in shaping the post-Cold War order will suddenly adopt a new approach, replacing military engagement and financial warfare with diplomacy. A crucial component to making such a shift is to initiate a full, public accounting of what went wrong, and who was responsible, and public dialogue about the benefits of adopting mutually beneficial, peaceful cooperation among sovereign nations.
What those among leading British spokesmen and their allies in the neo-con, neo-liberal establishment in the United States fear most, is that the American people can be rallied to support the American System economic policies developed over the last five decades by Lyndon LaRouche, the subject of the ongoing series of Schiller Institute forums.

A new era of Peace through Development beckons: Can the citizens of the western world summon the boldness and the courage to enter it?

1. The two conferences can be viewed at the Schiller Institute website. They are from July 31, “Afghanistan: A Turning Point in History After the Failed Regime-Change Era”; and from August 21, “Now More Urgent Than Ever: Afghanistan Is an Opportunity for a New Epoch for Mankind.”