We Have Reached the End of the Unipolar Era: Who Will Tell the War hawks?

by: Harley Schlanger
Dec. 17 -- Following the implosion of the COP26 climate summit and the farcical nature of last week's "Summit for Democracy", it is becoming increasingly evident that the power of the Trans-Atlantic alliance to enforce a unipolar order through false narratives, backed by military and financial intimidation, may no longer function.  The alliance has generally succeeded in imposing its will on the world since the collapse of the Soviet Union, arrogantly assuming the role as the ultimate arbiter of what its defenders call the "Rules-Based Order" (RBO).  Give up your sovereignty and play by the rules -- even when they undermine the development of your nation -- and you can be part of the club.  But step out of line, and you will face the full fury of an international war machine, steered from the City of London and Washington.
Just ask Saddam Hussein, Qaddafi, Yanukovych or Assad what the future has in store for you, if you defy the rules of the post-Cold War order!

Yet, in spite of the devastation and destruction which can be unleashed on those nations and leaders which refuse to submit, the unilateralists been unable to successfully conclude the wars launched since the 9/11 terrorist attacks on the U.S. The most recent example was the withdrawal from Afghanistan, where U.S. and NATO forces were unable to crush an insurgency, and left a nation in disarray, with a majority of its population facing possible starvation, as the "nation building" which had been the ultimate announced goal built nothing which could be sustained. While the alliance still possesses the power to withhold funds to starve millions who have the misfortune to live in a country targeted as a rules' breaker, this is hardly a positive advertisement for the RBO. The willingness of nations to stand up against the drive for a unipolar world undermined the efforts to impose a global "green" dictatorship at Glasgow, and provoked derision from many towards the idea of a summit to enforce democracy, through threats and bullying.

Yet the same institutions and individuals who were the architects of this policy seem to have concluded that they can still use their unilateral power to force the world to submit to their continued dominance. In the last weeks, following the retreat from Afghanistan, the Biden administration, with full backing from Boris Johnson's teetering government and NATO, moved ahead with its "Pivot to Asia", a containment strategy against China, and threats of military and other war-like acts against Russia, over Ukraine. In both cases a narrative was produced, which accused the two nations of aggressive intention and behavior towards Taiwan and Ukraine; a movement of weapons and troops followed, and the narrative was reinforced by allegations presented at various institutional settings, including at the NATO Foreign Ministers meeting in Riga, Latvia on November 30-December 1.

Then, in spite of what appears to have been a useful exchange between Presidents Biden and Putin during their video summit on December 7, the rhetorical assault escalated, as key figures, among them U.S. Secretary of State Blinken, British Foreign Minister Truss, and NATO Secretary General Stoltenberg, warned of "painful" measures against Russia, should they invade Ukraine. This, despite a pledge from Biden to host a dialogue with Putin and leading NATO members on Russia's concern over the eastward expansion of NATO, and Kiev's refusal to abide by the Minsk agreement. The belligerent attitude against both Russia and China was amplified at the so-called Summit for Democracy, which was a blatant attempt to divide the world into two warring camps, those of the "democratic" states against the "bullying, authoritarian" nations, headed by Russia and China.

The Schiller Institute's founder and chairwoman Helga Zepp-LaRouche has repeatedly warned that the proponents of the RBO are risking a nuclear war, with their threats to expand NATO in the Indo-Pacific region, to counter the alleged threat from China, and through their buildup of forces on Russia's western border. She said that western media complicity, through a constant barrage of lies backing up the hostile narrative, is blocking recognition of the danger, leading to a population "sleepwalking" into a nuclear war. She called on officials to have the courage to speak out, and for citizens to mobilize to head off this danger.

Saner voices are now emerging, provoked into action in part by comments from Sen. Wicker of Mississippi, the number two ranking Republican on the Senate Armed Services Committee. Wicker, on December 7, said that in the event of "Russian aggression" in Ukraine, "I would not rule out American troops on the ground. We don't rule out first use nuclear option." Later, in a clumsy attempt to backtrack, he still insisted that we should "not take anything off the table."

Statements, such as the ones from Sen. Wicker, who doesn't rule out a nuclear attack on Russia, has prompted Col. Macgregor among many others to speak out against the descent of Capitol Hill into the "Land of the Stupid".

Col. Douglas Macgregor, who was appointed by President Trump in December 2020 as a senior adviser to acting Defense Secretary Miller, described Wicker's statement as proof that Washington's "political class" has become the "land of the stupid," for even suggesting confrontation with Russia over Ukraine. In a Dec. 7 interview, he said an effort to "rescue (a U.S.) conventional failure", which was likely, could lead to nuclear war, "courting destruction of the known world."

Mcgregor's comments were made in an interview with FOX-News host Tucker Carlson, whose program has the largest audience of any evening news show in the U.S. The next day, in his opening comments, Carlson said it is "crazy" to be discussing confronting Russia militarily over Ukraine. He added that "no matter how far-fetched it may seem," a "hot war" with Russia is possible." On December 9, former Democratic Party candidate for President Tulsi Gabbard, who served in the U.S. military in Iraq, tweeted that Wicker's comment "exposes just how ignorant, insane and sociopathic he and other like-minded war mongers are." She repeated this on Carlson's program that evening.

The recent escalation from Trans-Atlantic leaders has provoked public response from other prominent U.S. officials. Among these are senior diplomat and China expert Chas Freeman, and former diplomat, CIA official and Islamic expert Graham Fuller, both of whom have given interviews with the LaRouche weekly online publication "Executive Intelligence Review." Both issued extremely sharp warnings that emergency measures must be implemented immediately to avoid global war and possible nuclear annihilation. The common theme in both interviews is that the U.S. must come to terms with the fact that there is a new dynamic underlying international strategic relations, that the U.S. is no longer the only superpower which can dictate terms and policies globally. There is a new reality, as China and Russia are offering peace through development to the world, rather than the economic, social and cultural decay of the degenerating Trans-Atlantic powers.

Central to this new reality has been the emergence of China's Belt and Road Initiative (BRI), a global development initiative based on respect for national sovereignty. The BRI has been embraced by more than one hundred nations, as an alternative to the austerity demands, neoliberal policies and neo-colonial looting imposed by the International Monetary Fund, and enforced by threats of military action by the Trans-Atlantic powers. The "Build-Back-Better" proposals from the west meant explicitly to counter the BRI, favor "net-zero carbon," initiatives, with an insistence on anti-growth "sustainable" energy restrictions, and are dwarfed by the large-scale plans of the BRI, with an emphasis on nuclear and coal energy sources to allow for development of full-set manufacturing capabilities, facilitating a leap-frog to new technologies and further scientific advance.

Watch the interviews on the Schiller Institute YT Channel.

Freeman said U.S. officials view the BRI as having "a geopolitical military purpose", while he sees it as a "great opportunity" for the developing sector, and a chance for the U.S. to compete as a means "to improve (our) own performance." He characterizes the present belligerent posture of the U.S. as based on "denial", which "reflects hubris on the part of the so-called blob" which directs policy. The "global order and geopolitics," he asserts, "have rearranged themselves, as others rise to match American power, at least at the regional level." Unfortunately, he concludes, the provocations from U.S. officials reflect no "new ideas or vision coming out of this administration." 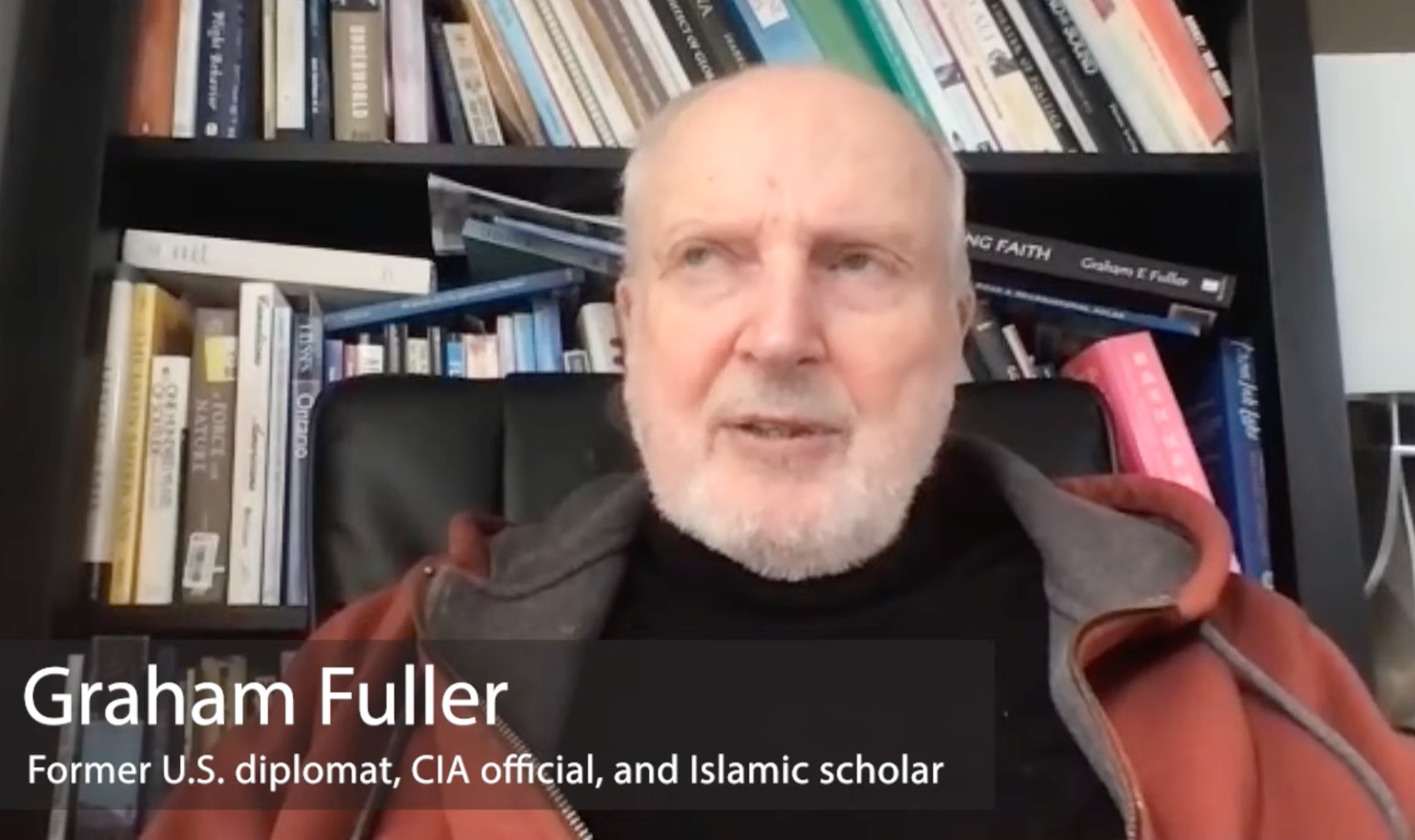 Fuller, in his appeal for tamping down the pressure and rhetoric against China, decried what he called the U.S. "habit of dominating", through use of money, weaponry and technology, "to be the number one player." Since 9/11, "American hegemony, predominance, is a fading quality...much of the rest of the world is rising." At this conjuncture, the "U.S. is going to have to back away ever more carefully, from overt assumption that it's going to be able to call the shots anymore."
(The full interviews are available at www.larouchepub.com)

While Blinken, Truss and Stoltenberg are trying to reverse this new reality by huffing, puffing and bluffing, both Freeman and Fuller hold out some hope that Biden is susceptible to adopting a diplomatic approach. Unless the declining Trans-Atlantic powers are prepared to launch and lose a war, they will be outflanked by a growing alliance of sovereign nations, working together for mutual benefit. The best option would be for a movement of citizens mobilizing to bring the presently brain-dead governments of the Trans-Atlantic region to recognize that the era of unipolar dominance is over, and to join this emerging alliance, which represents a "win-win" alternative for all.