The End of an Era

President Biden declared yesterday that the decision to leave Afghanistan is about "ending an era of military operations to remake other countries."  This raises the obvious question, what will replace this era, which has been characterized by "endless wars"?  Will the U.S. and NATO continue to pursue, unilaterally, an arbitrary Rules-Based Order, demanding submission to the failed neoliberal policies insisted upon by globalist financial and corporate cartels?  Or will civilization advance to policies based on economic cooperation among sovereign nations, committed to mutual benefit?

Is The U.S. Being Transformed Into A Parliamentary System?

by: Harley Schlanger
August 27 -- Even before the bloody ISIS-K terror attack on Hamid Karzai International Airport on August 26, there was a proliferation of calls for President Biden to resign, be removed under the 25th Amendment, or be impeached. Leading the charge in the U.S. are war hawks and neoconservatives, including supporters of former President Trump, such as Republican Senator Lindsey Graham, who said, "I think Joe Biden deserves to be impeached" for leaving behind Americans and Afghans who worked with U.S. forces. Graham seems to have missed Biden's pledge to evacuate as many as possible by the August 31 deadline, and the effective evacuation underway by the U.S. military of more than 100,000 since the Taliban marched into Kabul on August 15. Joining Graham is Texas Rep. Ronny Jackson, and the unhinged Congresswoman from "Q-Anon", Marjorie Taylor Greene, who announced that she will file impeachment charges on August 27. Sen. Rick Scott, a Florida Republican, was among the first to suggest that the 25th Amendment be used to remove Biden; the amendment calls for removal when a President is incapable of conducting his duties, and was previously promoted by anti-Trumpers such as Nancy Pelosi and the London Spectator.

It Was Not the U.S. Military Which Failed in Afghanistan, But the Neoliberal System They Were Sent to Defend!

Most of those involved in dissections of "What Went Wrong in Afghanistan?" are missing the obvious point.  What was wrong is the system, which placed the American military in a series on no-win wars, in defense of a "unipolar" world order which benefitted the few, i.e., those who run the global central banks and financial institutions on behalf of City of London and Wall Street interests.  That system should be buried, and replaced by a new system, which can bring lasting peace through economic development.  The era of "endless wars", of "Color Revolutions" to conduct "regime change", has been exposed on a global stage by the western military withdrawal from Afghanistan.  Good Riddance to that system -- we can now enter the era in which Development Is the Name of Peace. 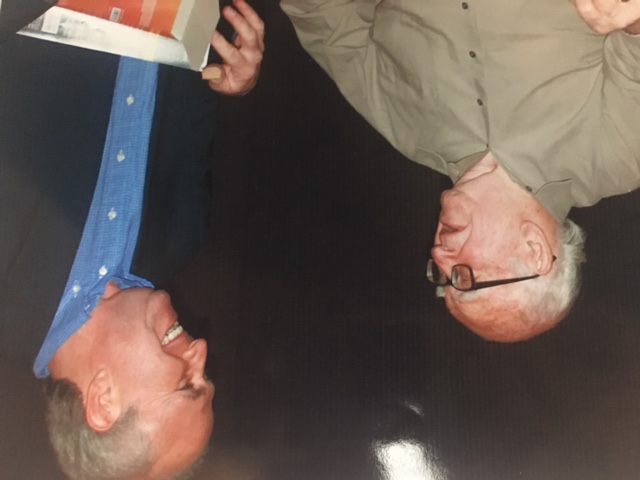 Ed Asner, with Harley Schlanger, following a performance of “FDR” in Galveston, Texas in 2012.

August 30 -- Ed Asner, a much-honored American actor, who was a civil rights and anti-war activist, passed away yesterday at 91 years old. He won multiple Emmys for his performances in two popular tv series, "The Mary Tyler Moore Show" and "Lou Grant." Later, as President of the Screen Actors Guild in the mid-1980s, his role in leading the fight to expose the "Iran-Contra affair", the dirty war in Nicaragua directed by then-Vice President Bush, likely led to his blacklisting in Hollywood in the mid-to-late 1980s, which did not deter him from continuing to speak out boldly on many issues. In later years, he re-emerged as a character actor, with many film and television credits.

Was British Intelligence Behind the ISIS-K Terror Bombings at Hamid Karzai Airport on August 26?

Posted by Asuka Burke · August 27, 2021 8:12 AM
Many questions were raised by viewers about our coverage this week of the hysterical British reaction to the decision to withdraw troops from Afghanistan, and Biden standing firm in that commitment, despite the attacks on him.  Would the British unleash a terror attack to change the policy?  Could they?  It has happened before!  Whether that happened yesterday, it is interesting that several viewers stated that there should be an investigation of whether the British played a role in the attack, noting that if they were so sure an attack was coming, why could they not prevent it?
3 reactions Share

As unfolding developments in Afghanistan have captured most people's attention, Federal Reserve officials will hold their annual Jackson Hole, Wyoming confab on Friday, during which they will confer on how to proceed with the Great Reset swindle without tipping off too many people as to their real intent.  While they engage in "Fed-speak" on such topics as "transitory inflation" and "tapering", what they really are doing is consolidating a global central banker's dictatorship, to hand the biggest banks and financial institutions control over fiscal, i.e., spending policy.  The only way to counter this drive for depopulation, is to mobilize for the implementation of LaRouche's "Four Laws", to revive physical production as an alternative to a bankrupt neoliberal speculative system.

Listen to the whining coming from mouthpieces for the City of London imperial financial swindlers, such as war criminal Tony Blair, or former Ambassador Kim Darroch, who said it will take "quite a long time...to recover from all this, to recover our reputation."  The truth is that Boris Johnson's "Global Britain" is a cover for continued British imperial looting, which depends on U.S. military backing to succeed.  With the G7 leaders unable to convince Biden to remain in Afghanistan, they are preparing other traps -- such as Ukraine -- to keep the U.S. engaged in "forever wars."  Instead, the U.S. must break with geopolitics and neoliberal trade and economic policies, and join with other nations to build up the capabilities of physical goods production, based on scientific and technological progress, to address mankind's needs for the next fifty years.

What really happened on 9/11?  Why did the U.S. go to war in Afghanistan, and remain for 20 years?  Why in Iraq, in Libya?  Who is the Patriot Act supposed to protect?  Is it not important to note that the same networks in the U.S. responsible for these wars and violations of American liberties are the ones who have benefited most from these failed policies?  And are the ones most hysterical about the U.S. withdrawal from Afghanistan?  NOW is the time to answer these questions, so Americans will never again die, and kill, to preserve the British Empire, the City of London, and the U.S. Military Industrial Complex.

Tony Blair Lectures Biden and the U.S. on the Responsibility to Continue "Forever Wars"!

Posted by Asuka Burke · August 23, 2021 9:37 AM
The individual who is among the most culpable for ongoing geopolitical confrontations which could lead to nuclear war, the Queen's Privy Council member Tony Blair, blasted Joe Biden for his "obedience to an imbecilic political slogan about ending 'the forever wars'."  Blair was not criticizing the way the U.S. left, but ending the war, saying that leaving Afghanistan shows the West has "lost its political will."  Clearly, this apologist for endless imperial wars has not lost his commitment to unleash genocidal catastrophes.  Not surprisingly, Dick Cheney's war hawk daughter Liz agrees with Blair, telling NBC News that proof the U.S. should not have withdrawn is that British parliamentarians and NATO officials are furious about the U.S. withdrawal!  Keep in mind that when Blair talks about commitment, the British have been playing the Great Game in Afghanistan on-and-off since the 1830s -- with consistently disastrous results.
2 reactions Share

"What Just Happened in Afghanistan?"

The Schiller Institute will hold a dialogue among leading officials on August 21, at Noon EDT, on "What Just Happened in Afghanistan?"

It is past time that we face the reality that continuing to make decisions based on 19th century imperial geopolitical doctrines and neoliberal economics leads inevitably to disaster. There is an alternative, which is to cooperate with other nations in junking the presently disintegrating world monetary system, and launching an era of mutually beneficial development projects. Instead of seeking new wars, for the benefit of the Military Industrial Complex, we can demonstrate, by joining with China, Russia and Afghanistan's neighbors, that Development is the New Name of Peace.