In the last days, Putin spoke with Macron and, at some length, with Xi.  With the former, he emphasized why he insists that western countries demand that Ukraine adhere to the Minsk agreement on resolving tension over eastern Ukraine, and agree to no further expansion of NATO.  With Xi, the discussion focused on achieving "ever-lasting peace and good neighborliness" on their common border.  Meanwhile, new German Chancellor Scholz is trying to reassure Germans that his radical Green transformation won't negatively affect their personal well-being!

Will the Biden Administration Proceed with the Judicial Murder of Julian Assange?

There is no better example of the fraud behind the Biden administration's "Summit for Democracy" than the attempt to murder whistleblower publisher Julian Assange.  His crime?  Publishing documents exposing war crimes committed by U.S. forces in Iraq, and covered up by U.S. officials.  The U.S. is proceeding with the case to extradite Assange from the U.K., where he continues to be held in Belmarsh prison.  As Assange awaits a predetermined guilty verdict if he is extradited to the U.S., the same networks he exposed for war crimes in Iraq are running yellow-journalist reports on Russia's alleged plans for a military attack on Ukraine, risking the danger of triggering World War III.

We Are Still in an Extremely Dangerous Strategic Crisis

The discussion of "de-escalation" from the threatening situation around Ukraine did not last long.  While Biden affirmed that he never intended to engage U.S. troops against Russia if a war broke out in Ukraine, the war hawks met at a G7 Foreign Ministers meeting, threatening "devastating consequences" if Russia would invade Ukraine, even as they were goading on Ukraine's neo-Nazi extremists in the defense and security forces to provoke a confrontation in eastern Ukraine.  Read Helga Zepp-LaRouche's statement, "Psychotics Are Threatening Our Existence! Germany Must Leave NATO!", to understand what's behind the war drive, and how to counter it.

"Summit of Hypocrisy" Is a Cover for Global Dictatorship

Friday questions -- What is the Summit for Democracy?  Do you think that it is inevitable that the U.S. will go to war against Russia and China?  What is the alternative to war, how can the War Hawks be stopped?  Who or what is behind the War Hawks, and the drive for more wars?  Is there a strategy to take power from the hands of the corporate cartels?  (Hint -- study LaRouche's Four Laws, and fight for their implementation)

In her weekly webcast, Helga Zepp-Larouche said that in spite of a potential for de-escalation of tensions between Russia and U.S./NATO resulting from Tuesday's video summit between Putin and Biden, we are "still sitting on a powder keg."  Biden said he will speak to allies about Putin's request for a guarantee of no further NATO expansion, and putting pressure on Kiev to stick to the agreements they signed at Minsk.  However, Sullivan and Blinken, who flanked Biden during his talk with Putin, continued to make threats against Russia, including that there would be a "blistering response" if Russia invades Ukraine.  This was backed up by threats to Russia from Democrats and Republicans, including one Republican Senator who called for considering a first strike with nuclear weapons against Russia.  In contrast, Tucker Carlson called such talk a "bipartisan sort of insanity."  Zepp-LaRouche concluded her comments by calling for reasonable voices to speak up now, and join her in pursuing multilateral cooperation through such projects as "Operation Ibn Sina."

The Biden-Putin Summit: What We Know So Far

De-escalation, or heightened tension and danger?  The initial reports indicate there may at least be a pause in the pre-war build-up.  But will NATO continue its eastward expansion, which breaks a pledge made by the U.S. in February 1990 -- of "not one inch eastward" -- and which Putin has called crossing a red line?  Biden responded by saying he will accept no red lines.  Despite the benefit gained from continuing a dialogue, the danger remains, especially as the U.S. and its allies continue the provocative claims that Putin plans to invade, as part of a broader propaganda offensive that splits the world into two camps, the "democracies" versus the "autocracies."  Thus, the deeper problem continues to be the commitment in the Trans-Atlantic to a world-view shaped by classic British geopolitics.

"Summit for Democracy" is a Cover for Imperial Geopolitics and War

By Harley Schlanger
Dec. 6 -- On December 9-10, the Biden administration will convene a "Summit for Democracy", with the announced intent "to renew democracy at home and confront autocracies abroad." The themes to be addressed are 1.) "Defending against authoritarianism"; 2.) "Addressing and fighting corruption"; and 3.) "Promoting respect for human rights." 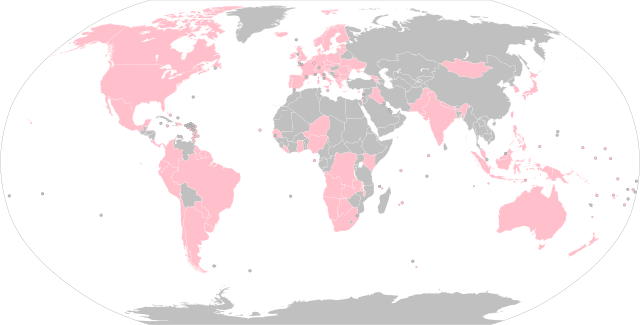 Countries invited to the "Summit of Hypocrisy"

But in looking at the diplomatic and military activity of the leading nations of the Trans-Atlantic world in the weeks preceding this event, it would perhaps be better named the "Summit of Hypocrisy", as their continued drive to impose a unilateral, arbitrary "Rules-Based Order" makes a mockery of the idea of "democracy." Dr. Andrey Kortunov, the Director of the Russian International Affairs Council, describes it in an op ed published in Global Times as an "Attempt to advance one single model over all others." With this event, he continues, the Biden administration is "launching an ideological crusade against China, Russia and other nations that dare to deviate from the fundamentals of the Western development model."

As the danger of war is again being ramped up, and plans for consolidating a new phase of a financial empire committed to deadly austerity against the majority of the world's population are being implemented, it is essential to keep focused on who and what is running that empire, and the policy solutions which can assure its defeat.  Our commitment is to both provide the intelligence as to who are the real enemies, and what policies can defeat them -- based on Lyndon LaRouche's proven expertise as a forecaster and as a physical economist.

As a virtual summit has been confirmed between Presidents Biden and Putin, taking place on Pearl Harbor Day, the psy-war push against Russia has escalated.  According to intel and military officials, media and think tankers, Russia will likely soon invade Ukraine.  They are mapping out a strategy to "punish" Russia if this happens, to mobilize world opinion against Putin.  Don't fall for it.  It is a classical distraction operation, to take your mind off inflation, energy shortages, and the collapse of the health care system, among other reasons.

Friday Questions -- Are the Globalists Crazy, Evil, or BOTH?

When you look at the chaos and disintegration that characterizes the state of the world today, you are seeing the result of the application of British imperial neo-liberal policies.  Forget the standard concepts of "liberal" and "conservative" that people choose to adopt.  Radical libertarianism has been used since the 17th century as the doctrine which justified the British Empire, and today's flailing Trans-Atlantic world.  The intent of the unilateralists of both U.S. parties is to double-down on the neoliberal paradigm, backed by U.S. and NATO military force.  Unfortunately for them, this power is no longer uncontested -- therefore, by asserting their right to a unipolar world, they risk plunging us into a war of annihilation of the human race.  The good news: they are weaker than ever, as their system is imploding; and the economic/political/scientific alternative developed by Lyndon LaRouche, which enabled him to forecast their demise, can be the basis for a new Renaissance.  Join with us today, to send the Malthusian unilateralists to a resounding, universal defeat!