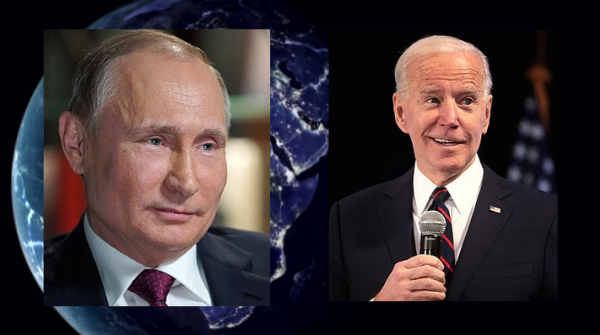 The insistence that Russia -- and China -- must submit to the arbitrary imperative of a "Rules-Based Order", became the standard during the last year of the Trump presidency, conveyed through the vicious Cold War-like rhetoric of the War Hawk Secretary of State Pompeo, and the escalated imposition of sanctions aimed at punishing the alleged "malign intent" of Russian officials. It continued in the first months of the Biden administration, with pronouncements by both Biden and his Secretary of State Blinken -- including Biden's affirmation to an interviewer that he considers Putin to be a "killer" -- which plunged relations between the two nations to a new low.

Even in the lead-up to the announcement of the summit, which White House spokesmen have said they hope will produce a more "stable and predictable relationship", new sanctions are being issued, and more are threatened. These include sanctions against senior Russian officials and businesses over the alleged chemical weapons attack on, and jailing of western-backed "dissident" Navalny, who the Russians identify as being deployed in a Color Revolution regime change operation against the government; and sanctions against officials over allegations of hacking against SolarWinds, and interference in the 2020 election. The latest charges, made with the typical failure to produce any evidence, accuse Russia with directing the hacking which shut down east coast oil and gas deliveries by the Colonial Pipeline; and Russian collaboration with Belarus in the arrest of a "dissident journalist", who has ties with Ukrainian neo-Nazis, and received training and funding from U.S. government agencies, including the U.S. Agency for International Development. In addition, the latest confrontation over Ukraine included charges from U.S. officials that they feared a Russian invasion, and U.S. NATO forces were put on the highest alert status. This occurred as NATO was conducting its largest military exercises in years, with troops deployed close to Russian borders in eastern Europe, and calls from Ukrainian and other officials to integrate Ukraine into NATO, which would cross one of Putin's "red lines.".

The Ukraine crisis, and the increased tension between the U.S. and China, have led to dangerous scenarios about the prospect of nuclear weapon exchanges should war break out. Stratcom commander Admiral Charles Richard recently said in Congressional testimony that the Pentagon "must shift its principle assumption from 'nuclear employment is not possible' to 'nuclear employment is a very real possibility,' and act to meet and deter that reality."

The announcement that the summit has been scheduled was met by an expected chorus from the media and Biden opponents among Republicans that this is a "gift" to Putin, and shows that Biden is "weak", and cannot be trusted to stand up to Russian "aggression." There has also been criticism of Biden over his decision to pull back some sanctions on the Nord Stream 2 pipeline, which Russophobes claim gives Russia the ability to blackmail European nations through withholding energy supplies! In fact, the attempt to shut down Nord Stream 2 by the U.S. and U.K. would punish their European allies, and make them increasingly dependent on more expensive oil and gas deliveries from the U.S.

A more realistic assessment of the importance of the summit came from General Mark Milley, the former chairman of the U.S. military Joint Chiefs of Staff. Speaking to an audience of graduating cadets at the Air Force Academy, he lamented that "the great power peace following World War II...is under stress, we can see it fraying at the edge." Addressing an unthinking drift toward war, Milley said it is necessary to "lift our gaze from the never-ending urgency of the present to set the conditions for a future that prevents a great power war."

Move To A New Paradigm

A more forceful positive assessment came from Helga Zepp LaRouche, President and founder of the Schiller Institute, who said the summit offers an opportunity to replace "geopolitical confrontation with a new paradigm of cooperation", based on a mutual commitment to realize the "common aims of mankind." In January 2020, following the assassination of Iranian leader Qassam Soleimani, which threatened to provoke a new war in southwest Asia, she called for an emergency summit, including Russia, China and the U.S. At the same time, Putin called for a meeting of the Permanent Five members of the U.N. Security Council, to address urgent matters of security and peace.

By identifying the cause of worsening relations as stemming from "geopolitics", Zepp LaRouche is pointing toward the influence of British intelligence and City of London financial networks in shaping U.S. policy, through its alliance with the globalist, corporate interests of the U.S. "Military Industrial Complex." This was recently reaffirmed by Blinken during his recent visit to London, when he assured U.K. Foreign Secretary Raab of the continuing U.S. commitment to the "Special Relationship", which he described as "dynamic" and "enduring." He used the occasion to praise arch-imperialist Winston Churchill on the 75th anniversary of his "Iron Curtain" speech, which inaugurated the Cold War, which lasted until the fall of the Soviet Union.

The "Rules-Based Order", which Blinken hypes at every opportunity, demands submiss 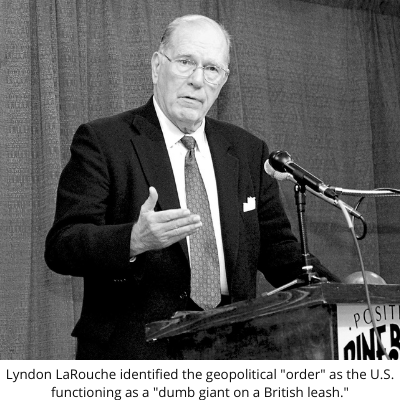 ion to a global order based on the unilateral supremacy of City of London/Wall Street financial control. As such, it targets for regime change those sovereign nations which refuse to submit. The use of U.S. military power to enforce this world order has been the reason for the succession of "endless wars", which stretch back to U.S. support for Afghanmujahideen against the Soviet Union in the 1980s, under Brzezinski's geopolitical "Arc of Crisis" scenario, and continues in present-day U.S. force deployment throughout southwest Asia. Lyndon LaRouche characterized this phenomenon as the U.S. functioning as a "dumb giant on a British leash."

The British role was identified in a sharp denunciation issued by Russian Foreign Ministry spokeswoman Maria Zakharova, who ripped into Great Britain’s leading role in trying to provoke global conflict with Russia. “The British policy in recent decades has ceased to be rational, it has become hostage to the proteges of the British political establishment obsessed with Russophobia,” she stressed. She was responding to a May 24 threat by British Foreign Secretary Dominic Raab, who charged that Belarus would not have carried out the action of forcing the landing of the Ryanair flight, without Moscow’s “tacit consent”. Zakharova stated that Russia will respond forcefully to any renewed attempt by Great Britain to impose sanctions on Nord Stream 2 over the Belarus incident, as suggested by Raab.

Zepp LaRouche has taken the point in demanding an end to the murderous U.S. sanctions imposed on Syria, as well as those killing children, the poor and disabled in Yemen and Iran. Instead, she has emphasized that a serious effort to end the "never-ending" wars would begin with a mutual commitment among the U.S., Russia and China to begin the post-war reconstruction of those nations severely damaged by those wars. For example, the attempted sabotage of negotiations between China and Iraq for oil-for-technology deals should be replaced by withdrawal of U.S. troops, and full support for the extension of the Belt-and-Road Initiative into the region. As her husband repeatedly emphasized, in a series of reports on the potential for peaceful development of the region, any political settlement must be preceded by agreements for economic development. These should focus particularly on modern transportation, water development and nuclear energy, he wrote. In her comments, Zepp LaRouche added the urgency of building advanced health care capabilities, not just in southwest Asia, but worldwide, as a crucial step toward lifting mankind out of the era of colonial domination, which has been reinforced by imperial geopolitics.

The building of a "stable and predictable relationship" between the U.S. and Russia can best be achieved by putting an end to the era of geopolitical manipulation run by the imperial globalists, and applying instead this "LaRouche formula", under the conception put forward by Pope Paul VI, "Development is the New Name of Peace." A step in this direction would be a welcome sign of ending the era of geopolitical provocations. 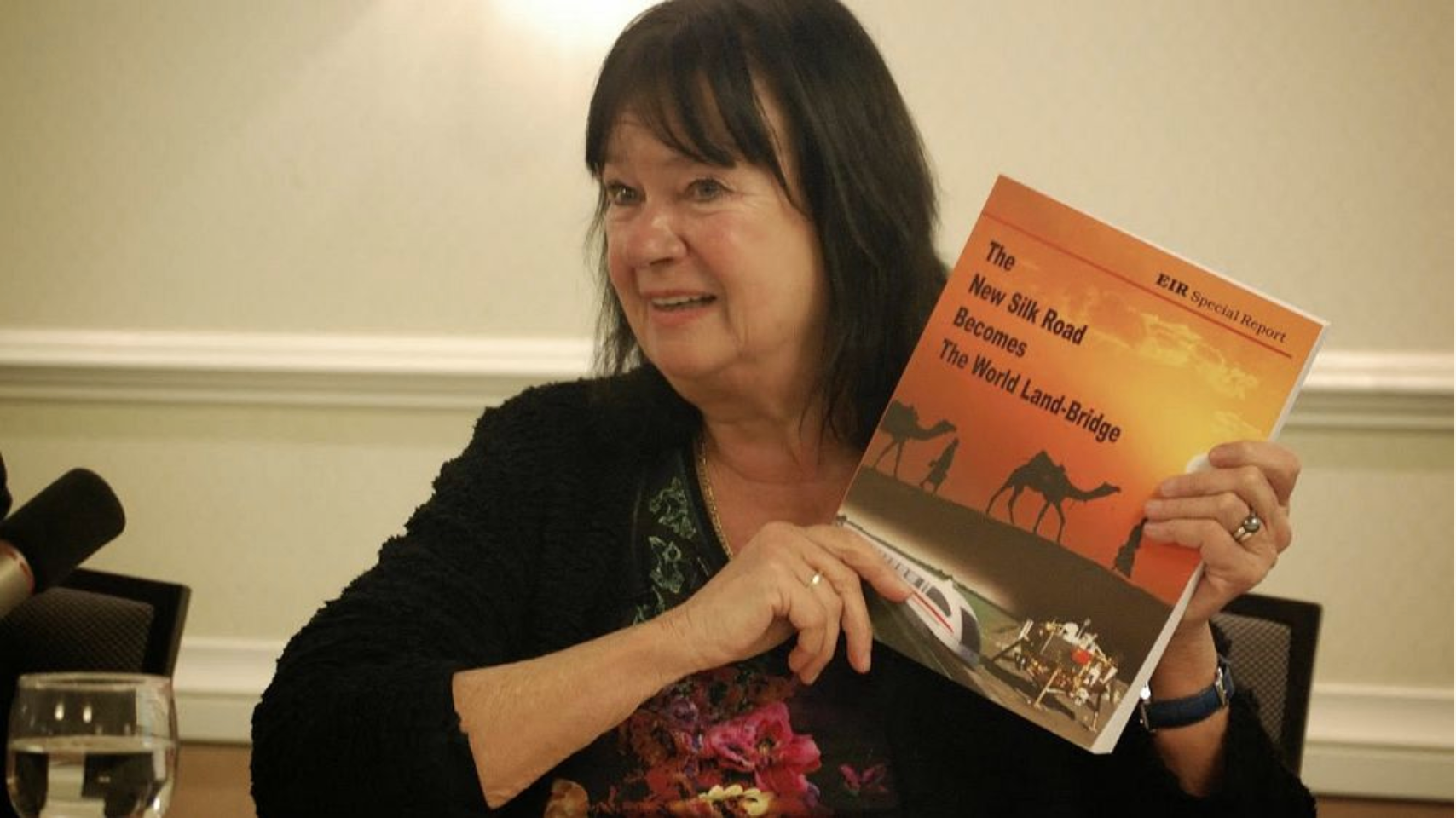