This is the transcript of the presentation delivered by Harley Schlanger to the August 14, 2021 conference of the LaRouche Legacy Foundation The conference was titled "So, Are You Finally Ready to Learn Economics?", and was dedicated to inspire the study of the rich body of work done by Lyndon LaRouche. In particular, it was to commemorate LaRouche's late 1960s forecast of the coming end of the Bretton Woods monetary system, which was launched with the decision to break the relationship of the dollar to gold, done by Richard Nixon on August 15, 1971; and LaRouche's subsequent forecasting of the accelerating devolution of the world financial system, which was done by the same oligarchs who persecuted LaRouche, in a vain attempt to eliminate his influence.

You can watch the proceedings here: www.LaRoucheLegacyFoundation.com

by: Harley Schlanger
According to the vast majority of journalistic and historical accounts of the process leading up to the Aug. 15, 1971 decision to sever the relationship between the dollar and gold, the most forceful advocate for this action was Treasury Secretary John Connally. Wikipedia, for example, says that Connally "presided over the removal of the U.S. dollar from the gold standard," and reports that President Richard Nixon "relied heavily on the advice of Connally" in reaching that decision. Economic historian William Greider, in his book, "Secrets of the Temple", writes that it was Connally, along with Paul Volcker, who "engineered the most fundamental change in the world's monetary system since World War II."

Connally, a former Governor of Texas, who had built a reputation as a tough, no nonsense wheeler-dealer in the best tradition of "independent", rugged Texans, had just been appointed Treasury Secretary by Nixon, as the dollar crisis was peaking. Though he had limited experience in, and knowledge of, international financial policy, it is said that Nixon admired him greatly, and especially respected him for his self-confidence and commanding presence. 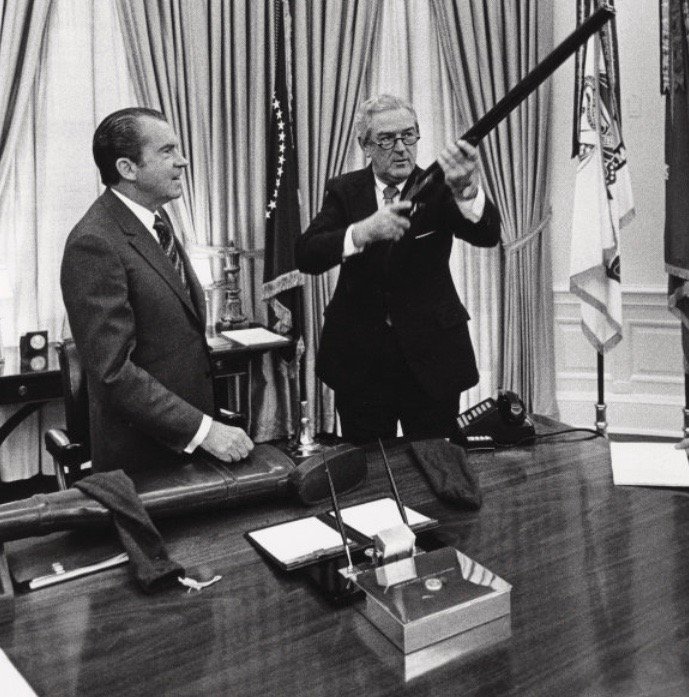 Richard Nixon and John Connally with shotgun in the Oval Office, 1971. Photo via twitter.

This same view of Connally was held by George Shultz, as a negative factor, as he was clearly not as enamored with him as Nixon was. Shultz, who was part of the team working with him to advise Nixon, wrote in his book "Economic Policy Beyond the Headlines," that Connally was pursuing "an extremely hard line toward European governments" in talks on dollar exchange rates, and took an "aggressive posture." Shultz added that he "flashed the signal [in defense of the dollar] in true Texas style, with both guns blazing in the corridors of international finance."

I had an opportunity to meet Connally, and have an extensive conversation with him about the process leading to the Aug. 15 event, under slightly more humbling circumstances for him. What follows is the report I filed on that conversation, which was published in the {Executive Intelligence Review}:

Far removed from the buzz of more than 500 people, in the back of the Hart Galleries in Houston, a tired John Connally surveyed the scene before him. It was January 23, 1988, the second day of a bankruptcy auction held to sell off a lifetime of possessions collected by him and his wife. With millions of dollars in debts, and little in the way of liquid assets, he could do little but watch as the auctioneer took bids on his worldly goods, with the proceeds earmarked to go to his creditors.

For the moment, Connally was alone. Although the press had written of his strength, how he had been standing firm in the face of adversity, he appeared tired.... I approached him and asked if I could ask him a few questions. He straightened up and said, "Only if they are not about bankruptcy."

I asked about his memories of August 15, 1971, and the announcement by President Nixon of the end of the post-war system of fixed exchange rates. He immediately brightened, saying: "Yes, that was my idea. I took that to the President two nights earlier." He continued, saying that we were facing a terrible crisis and that no one else would face it. He said it was his most difficult decision as Treasury Secretary, but events of the subsequent sixteen years had proven it was the right decision.

I told him I disagreed, that the shift away from fixed exchange had led to a series of devastating crises. I mentioned the August-September 1982 debt crisis for Mexico, with the vulnerability of the U.S. banking system to a default or moratorium; and the October 1987 stock collapse, as a result of the shift of the economy from production to speculation, a shift made inevitable by the action of August 15, 1971.

As he listened intently, I told him that I work with Lyndon LaRouche, who forecast that Nixon's actions of August 15, 1971 set in motion what would become the worst financial crash in history. I asked if he had any comments on that.

"Well," he replied, "I'm not sure about that. Of course, the crisis was already under way before I arrived." He told me he had little familiarity with international finance prior to his appointment by Nixon, and that he was first made aware of the problem during regular briefings from William McChesney Martin [then Chairman of the Federal Reserve].

I asked him, "So how was the decision made?"

He said there was a working committee, which included himself, Paul Volcker, and George Shultz. Sometimes Herb Stein attended, sometimes Arthur Burns. Of this group, only Arthur Burns was opposed to closing the gold window. They met on Aug. 13. Kissinger was not there, but Shultz was the most forceful in insisting that the fixed exchange system must end, and that Connally must brief Nixon immediately.

"No...These were the smartest men around. I figured they knew what they were doing." He added that he briefed Nixon the next day, and Nixon had only one question -- have you run this by Shultz? When told that Shultz was for it, Nixon asked him to get a draft to his speechwriters, and it was announced the next morning that he would give a major policy address.

I asked Connally if he had any regrets about the decision. He looked wistfully around the room and said, "Right now, I have lots of regrets about a lot of things." Any about Aug.15? With that, he walked away, saying he didn't want to think about it just then.

Left unsaid, but perhaps understood by him, was that his misfortunes were the direct result of the mid-1980s collapse and subsequent looting of the Savings and Loans, and the bust cycle of the real estate and oil sectors, into which he had invested heavily -- which resulted from the deregulated, free market economic measures imposed after the August 15 transformation he had supported.

When I briefed Lyndon LaRouche on Connally's confession, he said, "That sounds about right. Connally was being used by Shultz and the neoliberal free traders, to make it seem credible to Republicans and conservatives that Nixon's decision was to defend the dollar from foreign speculators." The irony, he said, is that neither Nixon nor Connally realized that the result would be to significantly undermine the dollar, by collapsing the U.S. productive economy.

LaRouche's assessment was confirmed in an article published in the Summer 2021 issue of {International Economy}, written by C. Fred Bergsten, a leading neoliberal monetarist economist, who served as a deputy to Kissinger on the National security Council, and is a founding Director of the Peterson Institute of International Economics. Bergsten recounts a six-hour meeting he and three other leading economists had with Connally and Volcker on August 18, to discuss what to do next. He said he concluded that Connally had no interest in systemic reform, of the sort he and his colleagues were urging. Connally concluded the meeting by saying, “The foreigners are out to screw us. It is our job to screw them first. Thank you for your help.”

Bergsten writes that he was convinced by this meeting to forcefully speak out against the August 15 policy, and decided to "mount an attack against Nixon and Connally." But looking back on it now, he concludes that the "ultimate results" of the August 15 decision "turned out to be highly constructive," as they played an important role in gaining acceptance for adoption of the Tokyo Round of GATT -- which he writes served to restore "the forward momentum of liberalization." It was the Tokyo Round which undermined the sovereignty of nations over trade policy, by adopting a requirement that there could be no government efforts to foster production, and a ban on government subsidies of exports, both major components of the deindustrialization of the U.S., which has accelerated over the last five decades. Thus, the Aug. 15 policy decision was a key component to implement what Volcker later publicly advocated, in 1978 in a speech at Warwick University in Great Britain, as the "controlled disintegration of the world economy" as "a legitimate objective for the 1980s."

It is therefore not insignificant that, when Connally left his post as Treasury Secretary, he was replaced by George Shultz, who was a key figure in advancing the Tokyo Round, and in 1973 formalized the floating exchange rate system, which had been adopted as a "temporary measure" by Nixon.