“Green” energy is a recipe for mass death: high prices, blackouts, and lost productivity in the United States, and enforced poverty in the developing world, costing hundreds of millions of lives.

Achieving reliable, inexpensive power to supply the needs of a prosperous future requires rejecting the low-density, unreliable energy sources so highly praised by climate crusaders, and instead adopting power sources of high energy and power densities—such as nuclear, coal, and natural gas in the present, and moving forward to more advanced types of nuclear power, including nuclear fusion, in the future.

It is a telling contradiction that many of the leading advocates of dramatic reductions in CO₂ emissions oppose nuclear power—which uses two orders of magnitude less land than solar panels, one order of magnitude less material inputs than windmills, and a million times less fuel than biomass—on the laughable grounds that it is unsafe. Invoking horrifying images of nuclear plants exploding like nuclear bombs (an absolute impossibility), nuclear fear-mongers mock your intelligence.

So why is nuclear power so, well, powerful?

First, let’s consider the energy density of the different fuels human beings have used, from wood to coal to oil to natural gas, to uranium. And let’s look at how these fuels have supported the growing energy needs of the United States. 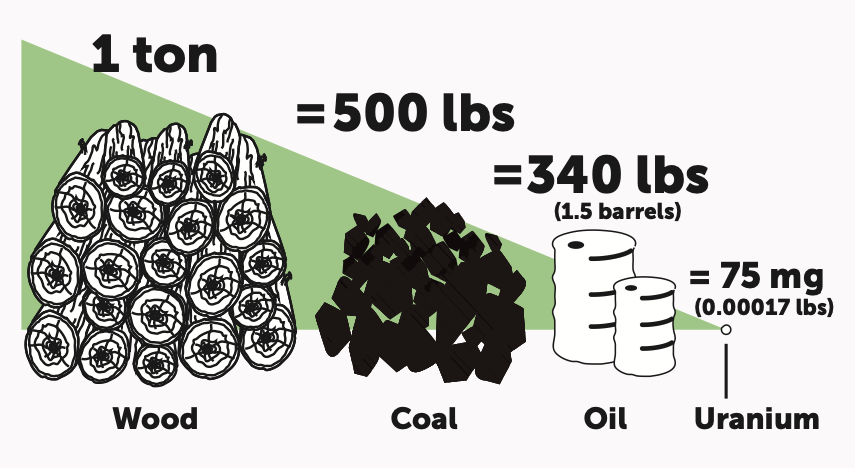 Coal has twice the energy density of wood. Coal mining is also more efficient, from a transportation standpoint, than harvesting lumber. So, for many uses, consuming coal made much more sense than burning wood.

Coal saved America’s forests and trees for other uses, like construction and furniture, as well as simply being pleasant to look at. Although it is possible to operate a steam engine (such as a steam locomotive) with wood, it is coal that made the railroads and industry possible. Harvesting, storing and transporting the necessary volume of wood would be impractical.

Oil has an even higher energy density than coal. And since it is a liquid, it can be used in internal combustion engines, which are far more efficient—in terms of power output per engine size—than external combustion (coal) engines. Can you imagine a coal-powered airplane? How much coal and water would you need to bring with you in your coal-powered car for an out-of-town trip?

Natural gas is also more energy-dense than coal for electricity production. Since it can be transported through pipes, it is much easier to get to businesses and homes than deliveries of coal or wood.

The Power of the Atomic Nucleus

You may remember from physics class that opposites attract and like charges repel. But a nucleus of uranium contains 92 protons—all positively charged—in close proximity. There is an enormous amount of energy inherent in that configuration, which can be released by transforming the nucleus. The fission (breaking apart) of the nucleus of the uranium-235 isotope releases tens of millions of times more energy, per reaction, than burning a molecule of methane (natural gas).

This almost unimaginable energy density is the reason that a tiny pellet of nuclear fuel (the size of the joint of one of your fingers) carries as much energy as a ton of coal. 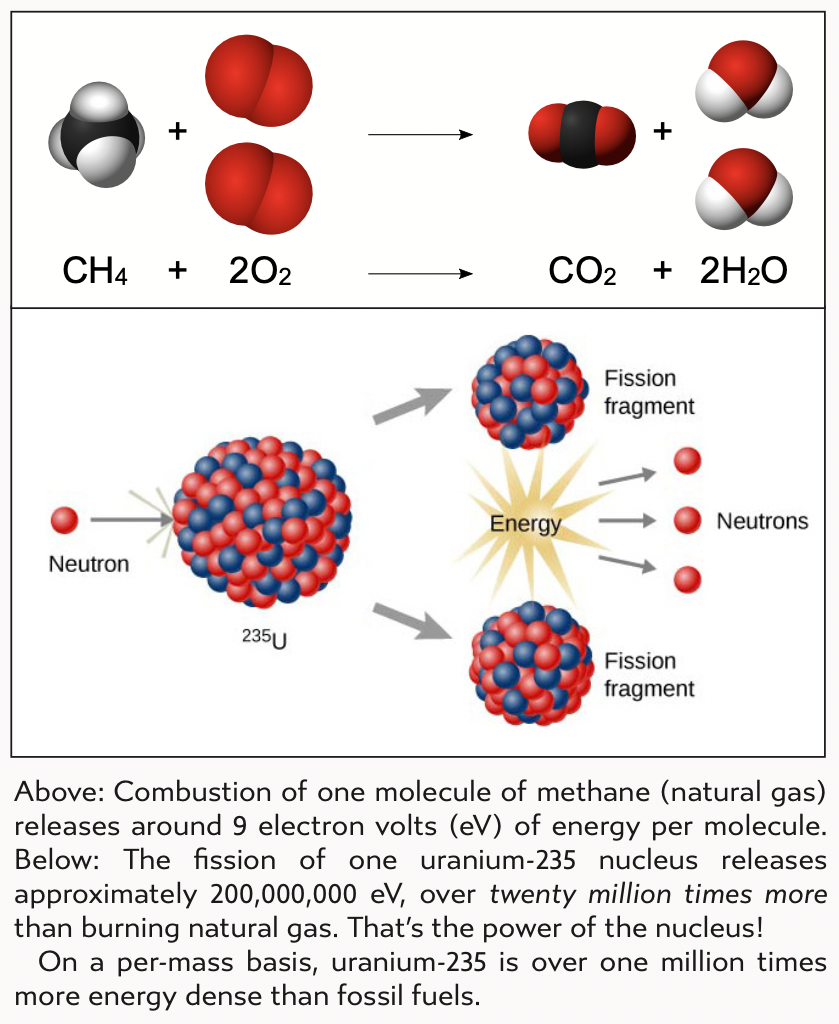 Including the uranium ore mined for fuel, the total material requirements for nuclear power are less than 10% of what is required for windmills. Although windmills don’t require any fuel to operate, they do require a great deal to manufacture in the first place. It would take one thousand “modern” windmills (an oxymoron?) to produce the same total output as a nuclear plant. And that wind farm would cover an area of around 300 square miles, compared to the approximately one square mile for the nuclear plant. And that output would come when the wind blows, not when people need power.

When it comes to interruptibles (foolishly called “renewables” ... as though windmills “renew” themselves after a couple dozen years, rather than going—as indeed they do!—into the trash), their unsuitability as a basis for an energy system makes an even stronger point than their resource-heavy production and poor power output.

Solar panels are fine if you don’t care when (or whether) the electricity is available, or whether you have to achieve a competitive cost (such as when you have solar panels on your roof and the utility company pays you full retail rates for the power they provide on sunny days).

But for building an energy system, the unreliability of these interruptibles doubles their effective physical cost, since they require either storage (outrageously expensive) and / or backup natural gas plants (not free) to produce power when the sun don’t shine, a situation that reliably occurs every night.

Instead of trying to capture the faint light from the distant sun, why not recreate here on Earth the process that powers the sun, and use the power directly? That is the idea behind nuclear fusion, which liberates energy by uniting small isotopes of hydrogen or helium into larger nuclei. It will provide even greater energy densities than current fission-based nuclear plants.

As coal allowed for steam engines, trains, and modern factories, allowing machines to do work that could not be accomplished by human muscle, nuclear power—especially nuclear fusion—unlocks an economy that processes materials (and waste) far more efficiently, reducing the difficulties of mining.

With nuclear fusion, we can desalinate ocean water as needed, even for agricultural supply, making droughts a thing of the past. And nuclear allows us to reliably electrify the economy, including rail and other transportation, while allowing the efficient production of hydrogen and other synthetic fuels to spread its benefits to applications that currently rely on combustion.

Without building up reliable electricity infrastructure, we face the certainty of an increasing number of blackouts, which take a terrible toll on society, causing damage, significant safety risks, and jeopardizing health and well-being. (How will you or your elderly neighbor fare without air conditioning in 100 degree heat, or without heating in sub-zero temperatures?)

A reindustrialized, productive United States will require at least an additional 500 GW of reliable electricity generation to power its industries, resource and water needs, and increasing freight and passenger movement carried on electrified rail.