Kazakhstan is the ninth largest country, by area, in the world. It shares a 4750 mile long border with Russia and a 1100 mile long border with China. While it has very large oil and precious metal reserves, most importantly, for the current and future of nuclear power, it has the world’s largest uranium reserves. In 2020 Kazakhstan produced the largest share of uranium from mines, 41% of the world’s supply (almost 20,000 tons!). Historically it was the Silk Road’s link between China and Europe, and today has played a major role in China’s Belt and Road initiative. Thus from a British “Great Game” geopolitical standpoint it is a critical place targeted for destabilization. [See Box on the Great Game pg. 28]
Compare the events on the Maidan to what unfolded in Kazakhstan in January of this year. On Sunday January 2 demonstrations began in Kazakhstan over the ending of price controls for liquefied petroleum gas (LPG). As if written by British puppet-masters, among the reported demands of some of the protest groups were the “withdrawal from all alliances with Russia” and that “Kazakhstan should leave the Eurasian Economic Union.” On January 5th, 2022, even though Kazakh President Kassym-Jomart Tokayev restored the price controls and removed the former, long term President Nazerbayev from his current post, protests suddenly turned violent. Tokayev declared a two-week state of emergency in the Central Asian nation’s biggest city Almaty and in the western Mangistau province. Even though most of the economic and political demands were met by the government, instead of the protests ending, they magically exploded. At that point, Tokayev turned to Russian President Putin and called for the Collective Security Treaty Organization (CSTO) peacekeepers to come to Kazakhstan’s aid, in their first-ever such deployment. He also addressed the nation and announced that the police and security forces would no longer hold back from using lethal force.
On January 10th, Tokayev stated at an extraordinary online session of the Collective Security Council of the CSTO that:

Masquerading as spontaneous protests, a wave of mass riots unfolded when religious radicals, criminal elements, outright bandits, looters and petty hooligans emerged as if by a single command. The socio-economic, public and political demands vanished into thin air and were forgotten…Following this, a hot phase ensued and gangs of armed bandits waiting for their moment jumped into action. The main goal became obvious: to undermine the Constitutional order, take down the governing institutions and seize power. That is a coup d’etat…As a person who knows about a full picture of the developments, I can responsibly say that all the events since the beginning of this year are links in the same chain. They are governed by a single destructive scenario that has been in the making for a long time. An investigation will reveal how long these preparations had been underway: for one year, two or three years…These were the attacks by well-trained professionals, including snipers with special rifles. The terrorists used their own communications and disguised themselves with the uniforms of military and law-enforcement personnel…Having five times the numerical advantage, the bandits attacked policemen and servicemen and beat them up with particular cruelty. They cut off the heads of two servicemen…Real battles took place in Almaty and other cities. For example, the battle for the Almaty interior department lasted two days. The police were engaged in repelling the terrorists’ attacks. In Almaty alone, seven weapons stores were captured.

After watching the 2014 coup in Ukraine unfold, the plan to manufacture a regime change on Russia’s border, in Kazakhstan, did not catch Russia unprepared. Key points from Russian President Vladimir Putin’s address noted that the CSTO alliance had managed to “prevent the undermining of the foundations of the state” and “the complete degradation of the internal situation in Kazakhstan.” They had blocked “terrorists, criminals, looters and other criminal elements.” Russia will not allow “color revolutions.” He continued, “Well-organized and well-controlled groups of militants were used, including those who had apparently been trained in terrorist camps abroad.” Putin described ”Maidan technologies” that were used to support rioters and share information, distinguishing between protesters over economic conditions and those who would hijack such concerns for undermining a country.
The region’s Collective Security Treaty Organization (CSTO) had successfully deployed its peacekeeping force into Kazakhstan precisely to crush this terrorist operation, before it could be consolidated. CSTO peacekeepers were not only deployed to protect fuel, nuclear energy, military, and aerospace facilities, but “to prevent the formation of a terrorist pseudo-state mirroring the Islamic State (IS) in Kazakhstan. There are quite a few radical Muslim terrorists in Kazakhstan who gained experience in Iraq, Syria, or Afghanistan,” reported Russian military expert Viktor Murakhovsky in Izvestia.
Predictably, on January 7th U.S. Secretary of State Antony Blinken warned that Kazakhstan will find it difficult to lower Russian influence after inviting its troops in to quell unrest. He snidely commented “I think one lesson in recent history is that once Russians are in your house, it’s sometimes very difficult to get them to leave.” In fact, after successfully protecting the sovereignty of Kazakhstan, CSTO forces were fully withdrawn by January 19th, only 14 days after being invited in by President Tokayev. 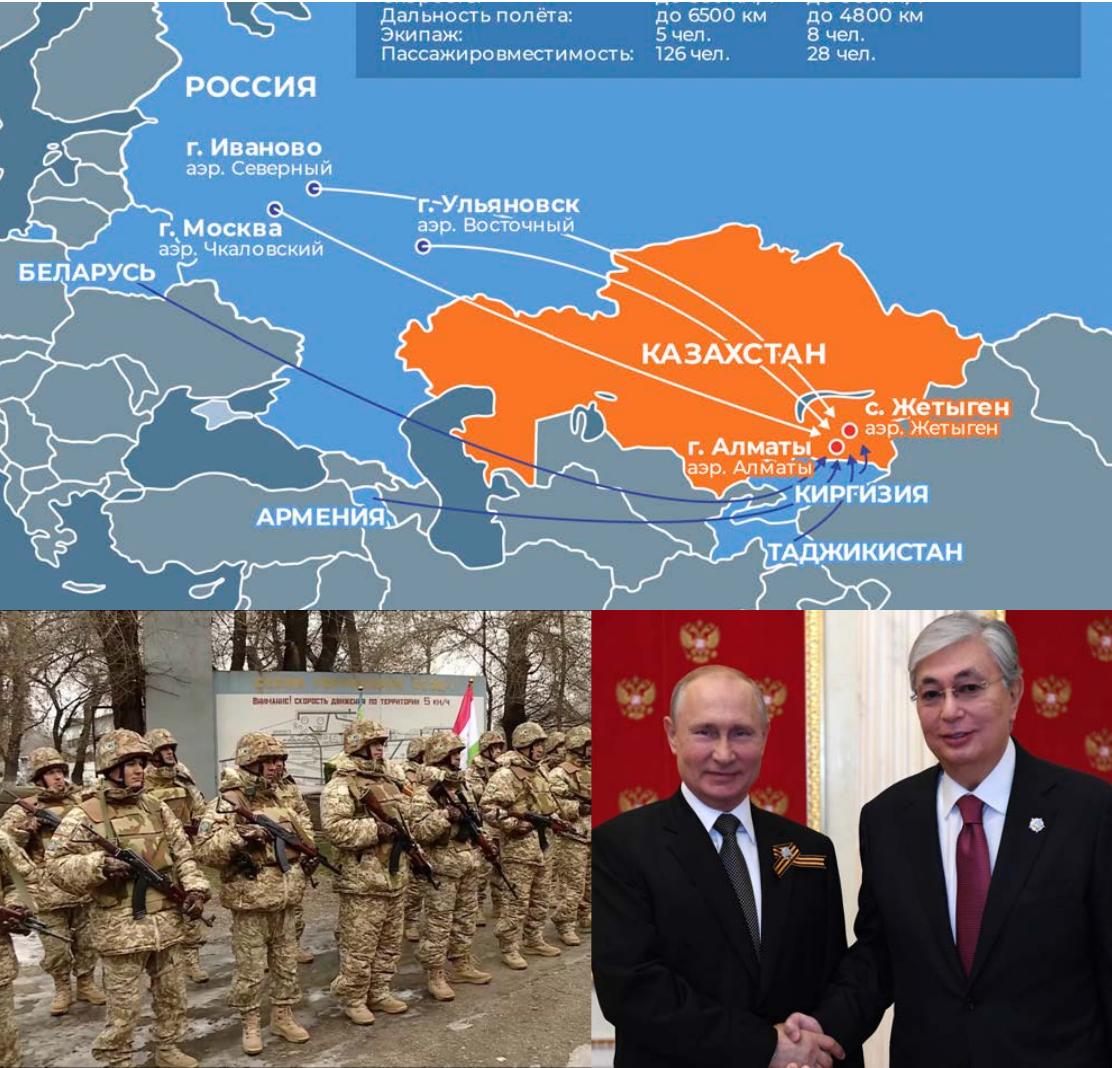 The region’s Collective Security Treaty Organization (CSTO) had successfully deployed its peacekeeping force into Kazakhstan precisely to crush the January 2022 attempted color revolution before it could be consolidated. Russian President Vladimir Putin and Kazakhstan President Kassym-Jomart Tokayev worked together. Cooperating troops were withdrawn after 14 days.