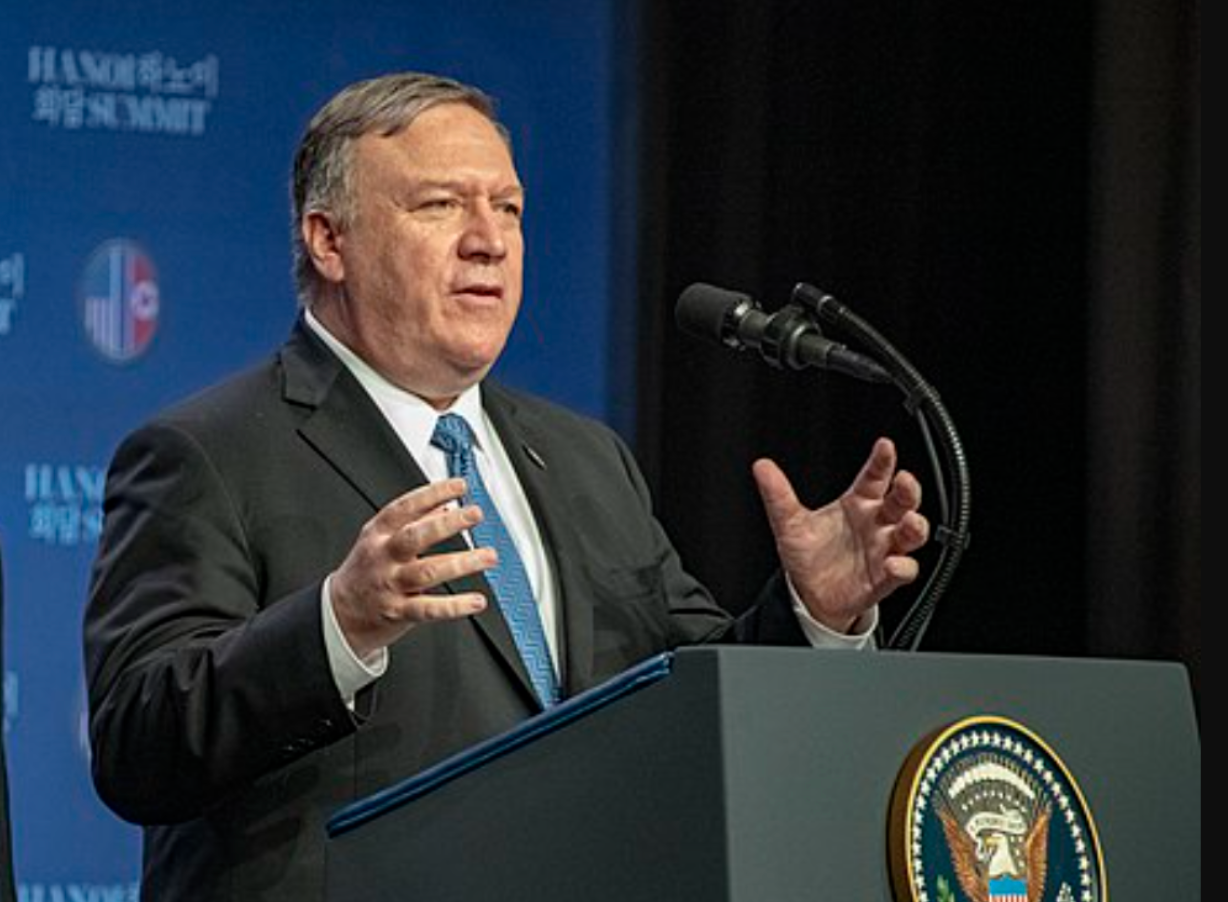 Mike Pompeo at a press conference in Hanoi, Vietnam, on February 28, 2019.

Oct. 1 -- In an article posted on September 26 on Yahoo News, reporters Zach Dorfman, Sean Naylor and Michael Isikoff wrote that plans were discussed and drafted in 2017 by CIA officials to silence Wikileaks founder Julian Assange, by kidnapping him and/or assassinating him. (1.) They report that the planning was catalyzed by CIA Director Mike Pompeo, who had an "obsession" with Assange and WikiLeaks. The Yahoo News article confirms in large part reporting from Max Blumenthal of the Gray Zone, published in May 2020, which focused on the CIA's use of Sheldon Adelson's private security team in spying on Assange while he was in asylum at the Ecuadorian embassy in London. (2.) It also confirms the concerns and fears of many committed to free him from a British prison, that the harsh treatment he is receiving there, or his extradition to stand trial in the U.S., are intended to kill him.

By 2017, Assange had been living in Ecuador’s Embassy in London for five years. At the time, Ecuadorian officials had begun efforts to grant Assange diplomatic status, to give him cover to leave the Embassy and fly to Moscow, to serve in Ecuador’s Mission there. The authors report that some senior officials inside the CIA and Trump Administration conferred on “options for how to assassinate him, as well spy on his WikiLeaks associates and steal their devices.” Assange had been watched by U.S. intelligence agencies for years, but plans to stop him were spurred by WikiLeaks’ ongoing publication of highly sensitive CIA hacking tools known as “Vault 7.” The CIA believed this revelation caused the largest data loss in CIA history. The authors quote an unidentified source that Pompeo was made completely furious by this event.

The report claims to be based on conversations with more than 30 former U.S. officials—8 of whom described CIA plans to abduct Assange. The report declares, "It was a campaign spearheaded by Pompeo that bent important legal strictures, which may have jeopardized any prosecution of Assange, and risked a damaging episode in the United Kingdom...." They note there was opposition to the proposed operations from both National Security Agency officials, and members of Trump's legal team. Eventually, those arguing for an approach based on the courts, rather than espionage or covert action, won the policy debate. On April 11, 2019, Ecuador’s new government revoked Assange’s asylum and evicted him; British police arrested him, and the U.S. government unsealed its initial indictment of Assange the same day, seeking his extradition from Britain.

The Yahoo article comes at an inconvenient time for Pompeo, who is highly ambitious and is planning to run for President. His efforts at damage control are instead exposing him as a liar and a hypocrite, while disproving his assertion that he was a Trump loyalist throughout his term as CIA Director and Secretary of State. For example, in an interview with conservative talk show host Glenn Beck, he attacked one of the authors, Michael Isikoff, correctly identifying him as a “big Russiagate hoax perpetrator.” Isikoff was the first to peddle the dossier produced by former MI6 operative Christopher Steele, which was used by Trump opponents in the intelligence community, Democrats and media to assert, falsely, that Trump was aided in his election campaign by Vladimir Putin and Russian hackers, who allegedly provided the documents they hacked from Clinton campaign and Democratic National Committee (DNC) computers to WikiLeaks. Publication of those documents exposed corrupt actions of the Clinton campaign in winning the Democratic Party nomination.

However, unmentioned by either Pompeo or Beck is that Pompeo, after receiving a briefing in October 2017 by NSA whistleblower Bill Binney—in which Binney presented evidence that there was no Russian hack—did nothing to expose the Russiagate hoax. Though he asked Binney if he would meet with NSA and FBI officials to present his analysis, Binney confirmed that there was never any follow-up by Pompeo. Instead, Pompeo's spokesman said, “The Director stands by, and has always stood by, the January 2017 Intelligence Community Assessment,” which accused Russia of hacking DNC computers. By allowing this fraud to go unchallenged by the intelligence community, the Trump presidency was significantly undermined in his efforts to break with the the anti-Russian geopolitics of Obama, and instead forge a friendly, cooperative relationship with Russia and Putin -- thus leaving Trump captive to the Military Industrial Complex operators served by Pompeo, and unable to end the "endless wars", which had been a central theme of his campaign and his presidency.

Further, in the interview with Beck, he did not exactly refute the Yahoo story. He said that while he and Trump were often accused of being engaged in "crazy things", he stated that "we [meaning him and Trump] were very worried about the fact that we had bad actors...stealing very sensitive things," referring to Assange and WikiLeaks. This comment implies that Trump was in the discussion process with Pompeo and his collaborators, something which the authors were unable to confirm.

In a later interview with Megyn Kelly, he repeatedly stuck his foot in his mouth. For example, he asserted that the charge that he was drafting a plan to assassinate Assange is false, saying "We're not permitted by U.S. law to conduct assassinations." Investigative journalist Caitlin Johnstone points out, inconveniently for the lying Pompeo, that the Trump administration assassinated Iran's top military commander, Qassem Soleimani, in a drone strike, which he praised. Pompeo said of that assassination, "President Trump and those of us in his national security team are re-establishing deterrence, real deterrence, against the Islamic Republic of Iran." This coheres with a pledge he made in an October 2017 speech at the Foundation for the Defense of Democracies -- a neocon think tank whose funders include Sheldon Adelson -- when he said of the CIA under his direction, "We're going to become a much more vicious agency."

He also told Kelly that he believes that those who were sources for the Yahoo story "should all be prosecuted for speaking about classified activity inside the Central Intelligence Agency", a threat consistent with his efforts to stamp out freedom of the press in his obsessive desire to silence Assange and Wikileaks. As for his efforts to portray himself as loyal to Trump, he revealed a great deal, when Kelly asked him whether he agreed with Trump that Assange had been treated "very badly."

"No," he replied. "Assange treated the U.S. and its people very badly."

This release of this story coincides with a turbulent moment in U.S. foreign/strategic policy, following the ending by the Biden administration of the war in Afghanistan, and while negotiations are underway to remove U.S. troops from Iraq and Syria. There is an intense debate underway, with the war hawks -- including Pompeo -- using the chaos resulting from the rapid Taliban takeover to question whether ending the war was a mistake. Typical of Pompeo's history as a liar and a Sophist, he has joined those who said the decision to leave was right -- after all, he was the chief negotiator with the Taliban -- but the execution was flawed, and the U.S. should have left troops in place.

It is useful for the purpose of extricating the U.S. from the era of endless wars that this story of Pompeo's murderous outlook has been published. However, in the absence of a plan to work with other nations to provide an economic development perspective for Afghanistan, the desperate humanitarian conditions facing the Afghan people will lead to chaos, playing into the hands of those who are advocates of permanent war. The Yahoo story should serve as the beginning of a full accounting of those who wish to use the potential chaos to defend the geopolitical outlook behind the endless wars.

And instead of punishing Assange for his exposure of the war crimes of those protected by Pompeo, charges against him should be dropped, and a full exoneration should be extended to him.

Footnotes
1.) Kidnapping, assassination and a London shoot-out: Inside the CIA's secret war plans against WikiLeaks (yahoo.com)