William Gropper's "Construction of a Dam" (1939). The public mural was commissioned by the federal government as part of FDR's New Deal.

by: Harley Schlanger
Oct. 22 -- Since Bill Clinton's election as President in 1992, he and his four immediate successors all campaigned on the need to upgrade and modernize American infrastructure, and each one made a show of trying to pass a bill to do it. Yet a quick overview of the dilapidated state of infrastructure in the U.S. today makes it painfully obvious that each failed to reverse the ongoing decline of the basic platforms of infrastructure serving the economy. Worse, the collapse in most areas has been proceeding at an accelerating rate.

This is due not just to the failure of the Presidents, but the role of special interests controlling the Congress -- especially in banking, finance, insurance and real estate, which demand credit directed for speculative investments to bail them out, rather than for physical production -- and the abysmal level of economic discourse throughout the society. The passage by both the House and Senate of President Biden's Infrastructure Investment and Jobs Act in August, with a $1 trillion price tag, has provoked much discussion, but will do nothing to reverse the collapse, while its Green initiatives actually will speed up the decline of the U.S. as a manufacturing and agricultural power.

Biden apologists have been insisting that, when taken together with his effort to pass a separate $3.5 trillion spending bill as a companion bill, it is the most significant infrastructure overhaul since Franklin Roosevelt's (FDR) New Deal pulled the U.S. out of the Great Depression after 1933. The details tell a different story.

First, the much-hyped $1 trillion infrastructure plan only adds $550 billion to what had already been approved. Second, the total is to be parceled out over the next ten years! Third, the companion bill, which includes "energy" spending almost entirely allocated for "green" policies, is in the process of being whittled down, to appease fiscal hawks in both parties, so it can be passed before the Glasgow COP26 summit, to show the Biden administration's commitment to combating climate change. Biden personally lobbied Congressmen on October 21, pleading with them to pass the green spending bill, insisting that he needs this to make a positive show in Glasgow. "The prestige of the United States is on line," he said. "I need this to represent the U.S. overseas." 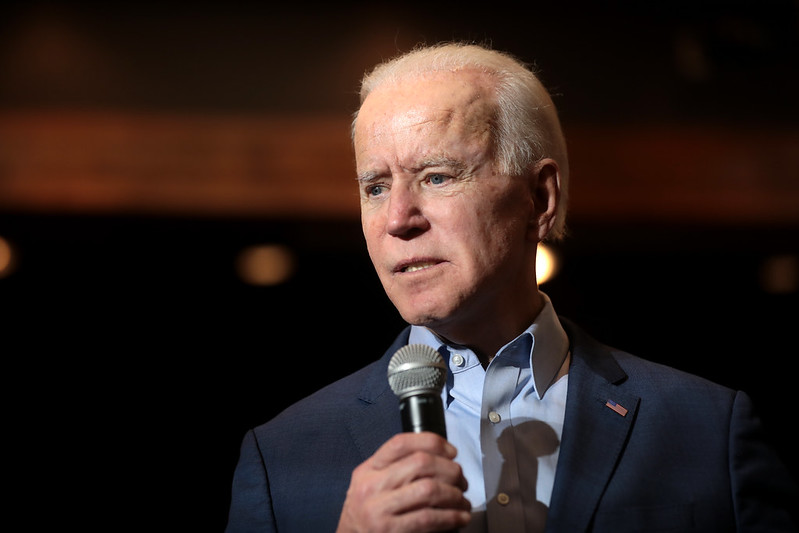 The non-Green expenditures for "social welfare" programs in the "budget bill", such as health care and education, are being dropped or drastically cut, due to opposition from "fiscal hawks", to appease the budget-cutting austerity mania which characterizes all policy debate in the U.S. The "green" part of this bill focuses on "climate change" measures, such as weatherizing houses and buildings, protecting wetlands, etc. As of midweek, the total has been reduced to under $2 trillion, with further slashes likely.

Contrast this approach with the large-scale plans implemented by China over the last two decades, which emphasized building new platforms of infrastructure, which have uplifted more than 800 million Chinese out of poverty; and their efforts, through the Belt-and-Road Initiative, to do the same for nations in Asia, Africa, and South and Central America -- programs which fulfill the uncompleted vision of FDR to end colonialism through the introduction to those economies of new technologies, and which apply financing methods modeled on those of the New Deal.

That the present plan before the U.S. Congress is inadequate is evident from a review of the quadrennial report of the American Society of Civil Engineers (ASCE), released in January 2021, which identifies necessary expenditures for infrastructure. In releasing the report, ASCE Executive Director Tom Smith said, "America's infrastructure bill is overdue, and we have been ignoring it for years." The report states that current infrastructure inadequacies will cost each American household $3,300 per year, cause the loss of $10 trillion in GDP and lead to a decline of more than $23 trillion in business productivity over the next twenty years, "if the U.S. does not close a growing gap in the investments needed for bridges, roads, airports, power grid, water supplies and more."

The report concluded that $13 trillion would be needed between now and 2039 to address the shortfalls of the last decades. Given that the Biden bill allocates only $1 trillion over ten years for the standard infrastructure covered by the ASCE report, it is far below the funds needed even for maintaining existing levels of infrastructure.

For example, the interstate highway system, which is now nearly 70 years old, will split $110 billion with other road repairs and bridges. This will not cover what is required to repair existing transportation arteries, and includes no new routes. This problem has been magnified by the present cost-inflation for over-the-road transport of passengers and goods, supply chain breakdowns, and the lack of mass transit as an alternative. It is estimated that traffic congestion costs U.S. drivers $121 billion/year; and 61,000 bridges have been rated "deficient."

Further, many states are facing rolling blackouts and inefficiencies in the electric transmission, which cost the economy $80 billion last year. While there are provisions in the Biden bill for improving electricity production and distribution, its spending is heavily tilted toward inefficient systems such as wind and solar, which have failed to keep the lights on in numerous states in the last years, including in Texas and California; and weather systems repeatedly knock out electric power lines from the Gulf Coast to the Atlantic coast, from Florida north to Massachusetts.

What Is Real Infrastructure

While neo-liberals in both parties complain that the cost is too high, the line coming from its supporters is that this is the greatest commitment to infrastructure since Roosevelt's New Deal. A simple comparison shows this to be a fraud. FDR used the Reconstruction Finance Corporation (RFC) as a kind of Hamiltonian National Bank, to generate credit for programs which served not only to improve "infrastructure", but to transform the nation's physical economy, utilizing new technologies which, when combined with broad educational programs, increased the productivity of everyone who was employed. Projects such as the Tennessee Valley Authority and Grand Coulee Dam, and Rural Electrification -- which built over two million miles of electricity transmission lines -- propelled the U.S. economy to become the most efficient in the world. Educational and cultural programs funded by the New Deal enabled the upgrading of the work force, which further boosted productivity per capita. 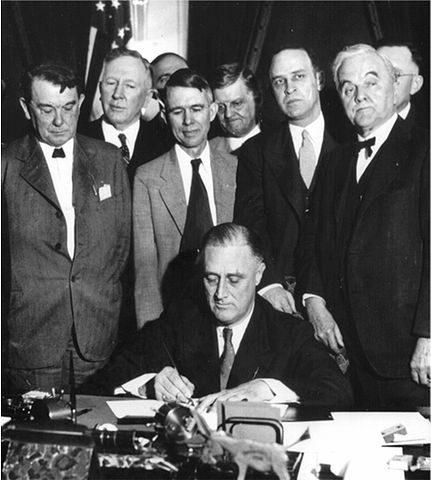 The Tennessee Valley Authority, part of the New Deal, being signed into law in 1933.

The RFC alone issued loans and credit totaling $33 billion between 1933-45, which in today's dollars is the equivalent to more than $660 billion. On a linear scale, this is approximately equivalent to the $550 billion in new allocations over ten years in the Biden bill. But scalar comparison is only a first approximation in addressing the overall effect of infrastructure investment -- much more crucial is how the funds are allocated. As Lyndon LaRouche, the leading economist of the American System of physical economy, wrote in a 1987 piece, he discovered that the key "is to define the interdependency of increase of potential population density with not only advances in technology, but the correlation between the possibiity of advances in technology and increase of both the energy-density and energy-flux density of the energy supplied to human activity."

Energy-flux density refers to the concentration of a power source, its ability to effect a physical transformation; for example, the relative power released in burning wood for energy, compared to that from burning a similar amount of coal, natural gas, or nuclear. An increase in Potential Relative Population Density, which results from a successful application of LaRouche's idea of the transformative power of energy-flux density, has driven the growth of human population since the Middle Ages, demolishing the contrary arguments of the followers of Malthus, who are accurately identified as the promoters of the genocidal "Green Revolution."

LaRouche continues: "The increase of the relative and absolute power of nations, in total, per capita, and per unit of land area, is determined in this way. Thus, as the increase or decrease of this power determines the relative and absolute conditions of nations and persons, so the results of policies are measurable. The functions for physical economy so defined are non-linear; hence, the making of policy, and the consequences of choices of policy, as their reality is measurable in such terms of physical economy, embodies the same non-linearity." The physical dynamic which determines such non-linear effects is what is crucial in economic policy deliberations, far beyond a scalar comparison of credit allocated. A dollar spent on bringing on line a nucear fission power plant to make electricity produces a far greater physical effect than a dollar spent on wood or coal burning technologies. [From a paper published by LaRouche, September 28, 1987, reprinted in {Executive Intelligence Review}, November 27, 2020) The Deeper Grounds for Philosophical Doubts Respecting the Existence of ‘Joe Biden’ (larouchepub.com). Ironically, this paper was written as a critique of the doomed 1988 presidential campaign of Joe Biden!]

The Biden bill, with its emphasis on green energy and carbon offsets, will reverse the advances from the past in energy-flux density, which have been the key historically for the development of the platforms of infrastructure required for a modern economy, and favor instead speculators looking for a piece of the green financial bubble. The new speculative bubble will expand exponentially, both in terms of financial and monetary aggregates, driving a further non-linear shrinkage of the physical economy, as described by LaRouche in his "Triple Curve Function." (For a full analysis of this, see {Executive Intelligence Review}, July 30, 1999: LaRouche’s ‘Triple Curve Collapse Function’ models economic breakdown (larouchepub.com))

Whether Congress ultimately passes the Biden infrastructure and budget bills, or some compromise demanding deeper austerity, negotiated with the neoliberal "fiscal hawks", the ongoing systemic collapse of the U.S. and world economy -- forecast by Lyndon LaRouche -- will accelerate, leading to a brutal depopulation of the human population -- which is the actual intent of this week's Glasgow COP26 summit. There is an alternative to this, based on LaRouche's discoveries, such as the relationship of energy-flux density to positive transformations of the overall scientific and technological advance of the physical economy, starting with applying his Four Laws, which would form the basis for a New Paradigm of peaceful, mutually beneficial cooperation among nations. [A summary by Mr. LaRouche of his "Four Laws" can be found here: The Four New Laws To Save the U.S.A. Now! Not an Option: An Immediate Necessity by Lyndon H. LaRouche, Jr. (Jun 8, 2014) (larouchepub.com).]