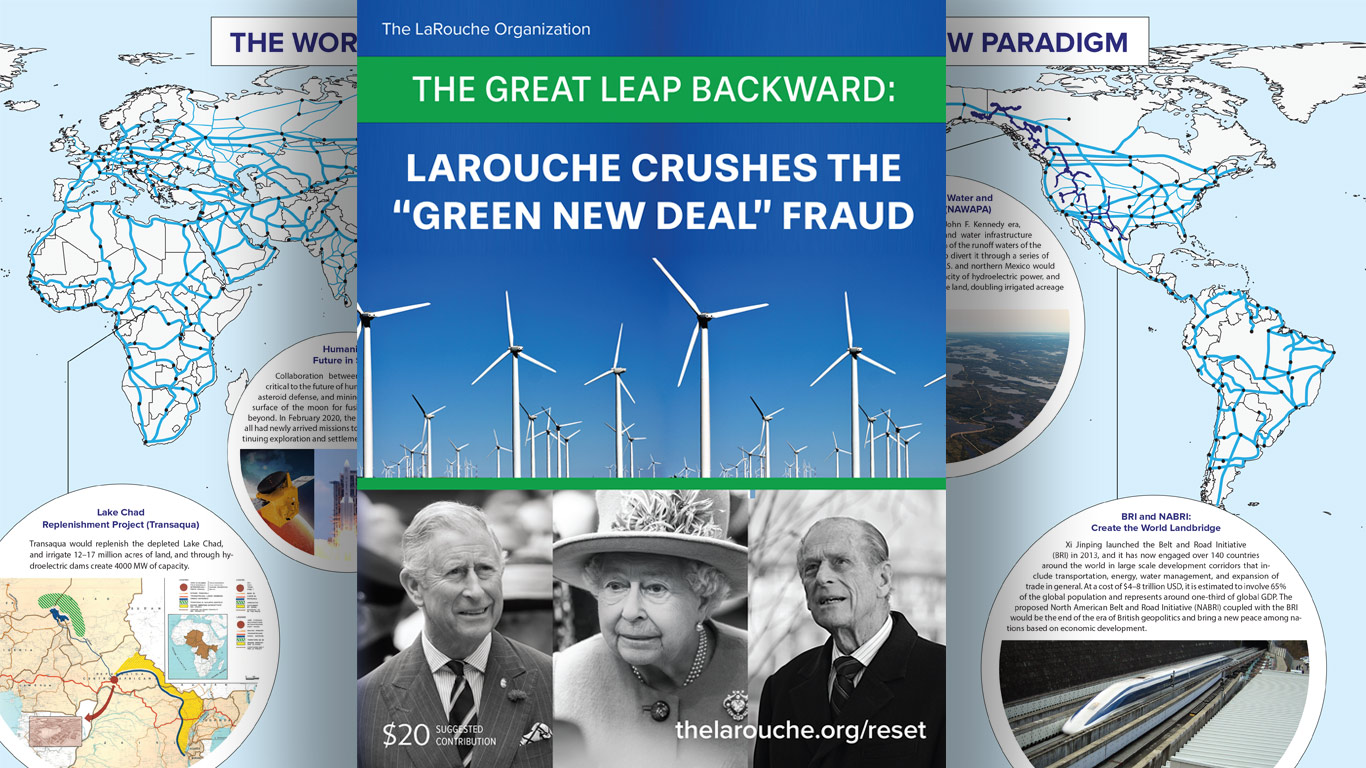 This pamphlet is your weapon in the war to end the reign of the British monarchy. To maintain its power after their financial system blew up in 2008, the British monarchy is now moving to implement their “Great Reset”—massive population reduction globally through the imposition of a “Green New Deal,” enforced by the financial oligarchy centered in the City of London. By imposing the “Great Reset,” the British monarchy risks the outbreak of war, which could quickly lead to nuclear war, given that its targets include China and Russia.

It is now time to rally the patriots of all nations on this planet to end the reign of the British monarchy and stop their Great Reset.

Join The LaRouche Organization to do that, and circulate this report far and wide.

The hysteria induced by the media and social media over a so-called "climate crisis" is not the result of over zealous tree huggers. It is rather deliberate psychological warfare against the US and world population by a financial elite desperate to hold onto power as their system collapses.

For decades, Lyndon LaRouche warned about the fraud of the organized environmental movement. It was never truly concerned with protecting the planet, but instead with reducing the population and preventing development in poorer countries [neo colonialism] and consolidating financial dictatorship in developed countries.

Man is not a Cancer on the planet, but rather the unique, creative force that can solve the problems that the universe challenges us with.

Let the material on these pages serve as a battle plan for you to join the fight.

The Real Science of Climate Change

There is no scientific consensus that CO2 or human activity drives climate change, or even whether it is a bad thing.  More importantly science doesn't work that way; it is based upon discovering truth, not majority opinion.  In fact, any true scientific discovery is at first only understood by a single individual.

Follow this page to learn what is actually changing our climate and how mankind can affect it for our benefit.

Forget the polar ice caps -- it's the FINANCIAL SYSTEM that's melting down!   The Federal Reserve dumping of $100 billion+ per month into the markets can't disguise the bankruptcy of the system much longer.  But, the billionaires and financial wizards of the Davos Forum have devised a plan, to salvage their rotten system -- a bubble to end all bubbles.  Call it GREEN FINANCE.  They will -- if you let them -- loot trillions in 'carbon offsets' from farmers and manufacturers everywhere to feed a speculative green bonanza.  They will  expand their bubble by killing our physical economy.   Listen to Mark Carney, former head of the Bank of England, then U.N. Special envoy on climate change:   “... Firms that align their business model to a transition to a net zero carbon world will be rewarded handsomely; those that fail to adapt will cease to exist…” This is mass murder, run by private finance.

The Genocidal Intention of Green Policies

“In the event that I am reincarnated, I would like to return as a deadly virus, to contribute something to solving overpopulation.”   Prince Philip Mountbatten, Duke of Edinburgh, founding president of the World Wildlife Fund.

Words of an eccentric crank?  Yes.  But, as founding President of the World Wildlife Fund, Prince Philip was also the spiritual godfather of the modern 'green' movement, and an apt spokesman for the British Empire's centuries-long agenda -- MALTHUSIAN DEPOPULATION.   Parson Thomas Malthus, hack propagandist for the British East India Company, justified the Empire's murderous policies with his bogus 'Principles of Population'.  Today, the Empire pushes an equally bogus theory it calls 'man-induced climate change.'   With its stated plan to reduce physical output of food and energy down to 'net zero' carbon, the Empire would collapse the population potential of planet Earth down to one billion human beings, or less.  The intended result is savage population reduction.


Global Opposition to the Great Reset

There is NO 'consensus' for the global Green Deal'!   As the recent referendum in Switzerland showed, a population educated on the true human costs of accepting CO2 reduction will REJECT  the diktats of green fascism.   The LaRouche Organization, with its international affiliate The Schiller Institute, is organizing a WORLDWIDE ANTI-MALTHUSIAN RESISTANCE.   Through our online conferences, we bring together cross-national forces of resistance in dialogue and discussion on the higher development mission of humankind.  There are many fronts in this battle of ideas.  At this link, we apprise you of the creative activities of our allies across the globe.

At its 11-day COP-26 Climate Summit in November, the elites intend to force their net-zero carbon carbon agenda on the world.  Through our activities, and especially through this site, we can move NATIONS to deliver a resounding 'NO' to the COP-26 agenda, and to finally bury the global 'Green Deal'.


On the Ground in the United States

The LaRouche organization is now in its third printing of its blockbuster pamphlet, 'THE GREAT LEAP BACKWARD:  LAROUCHE CRUSHES THE GREEN NEW DEAL FRAUD'.  We have delivered this item to legislators, farm groups, trade unions and many other forces who must stand up to challenge the fraud.  We need your help in escalating the fight!   We can provide you with pamphlets to mobilize folks in your part of the country.  Take photos and send in reports -- we will post them right here!

One spear-point is the campaign of Diane Sare, Independent U.S. Senate candidate against Wall Street's own Chuck Schumer in New York.  She is setting an example for the rest of us.

Our movement is reaching out to farmers and ranchers in America's heartland against the '30 X 30' appropriation of farm and ranch lands for 'biodiversity'.   In Texas, we are addressing town councils and state legislators.  In South Dakota,  a supporter has purchased billboards blasting the Green New Deal across the state.

What's going on in your area?  Let's keep this link alive, with reports coming in, from all over, every day!

Panel 2: Energy, World Health and the End of War: The Power of Energy Flux Density

Watch The LaRouche Organization's Interviews with the Authors of the "Great Leap Backward":