Can The U.S. Break Out Of The Trap Of Imperial Geopolitics?

by: Harley Schlanger
July 17 -- How is it that a nation, whose leaders proudly assert their right to unilateral enforcement of a Rules-Based Order (RBO), based on their economic and military power, can get trapped into a series of unwinnable "endless wars"? Unless this question is answered, it is virtually certain that those leaders infected by this delusion will follow the same strategy responsible for the present wars, resulting in even more destructive wars, including a possible thermonuclear confrontation which could exterminate the human race. 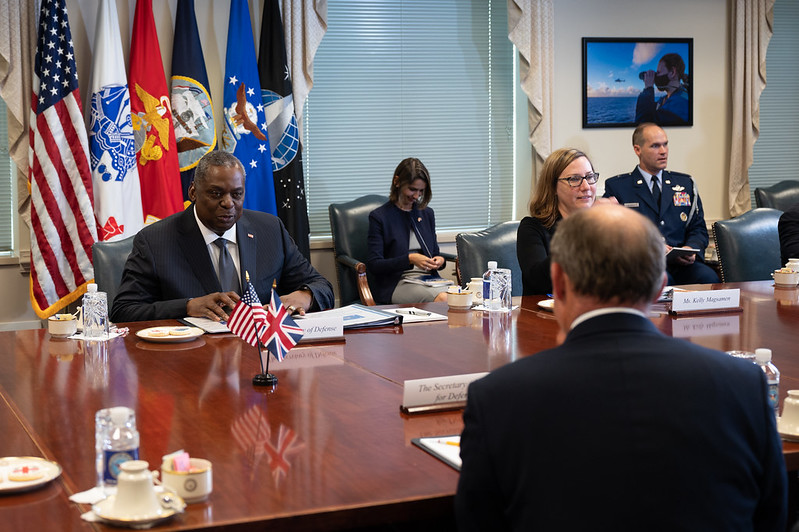 At the heart of the arrogant delusion is the concept of the "Special Relationship" embraced by the globalist officials in the United States and the United Kingdom, based on their mutual commitment to the British imperial doctrine of "Geopolitics". This alliance was featured at the recent summit of the G7 in the U.K., and reinforced in a series of bilateral meetings. Typical was the love fest when British Minister of Defense Ben Wallace visited Washington on July 13, to discuss the post-Afghan war deployments into the Indo-Pacific region. Following his meeting with the U.S. Defense Secretary Lloyd Austin, who proclaimed how much he is "looking forward to working with the U.K.," Wallace said, "...sticking together is what it's all about, we go together to the Pacific." He added that the UK "stands shoulder-to-shoulder with the U.S.", to "make sure that Britain's values and the U.S. values are held up and protected from whatever threats are thrown up against them."

The comments from Wallace echo those presented by British Foreign Secretary Dominic Raab to the Foreign Affairs Committee of the House of Commons, who said that the British Royal Navy is defending the rights to open passage on the seas, after the provocation of the HMS Defender against Russia in the Black Sea. We will do so, he said, "from the Ukraine to the South China Sea," stating that the deployment of the Queen Elizabeth II carrier strike group to the Indo-Pacific is "an exceptional opportunity for us to showcase our defense capabilities, but also the wider aspects of `Global Britain'". "Global Britain" is the new identity of the British Empire, concocted by the public relations team deployed to Boris Johnson's administration by the monarchy and the City of London.

For the Biden administration, the withdrawal of troops from Afghanistan has been defended as a move to pull back from engagement in southwest Asia, to free resources to contain Russia and China. This fulfills the intent of the Obama administration in its initial efforts to adopt a "Pivot to Asia." One of the authors of Obama's concept, Kurt Campbell, currently serves as coordinator of Indo-Pacific Affairs in the Biden National Security Council. He co authored an article in the January 12, 2021 {Foreign Affairs} magazine published by the Council on Foreign Relations, in which he identified two challenges in the region: the economic and military rise of China, and reversing the retreat of the U.S. While Campbell and his allies, Secretary of State Blinken and National Security adviser Sullivan, insist that the goal of the pivot is not to encircle and contain China, Obama contradicted this when he said that the economic measure defining the strategy, the free trade agreement Trans-Pacific Partnership (TPP), "allows America -- and not countries like China -- to write the rules of the road in the twenty-first century."

As defined by the leading proponents of the RBO in the U.S. and the U.K., the commitment to the British imperial doctrine of "Geopolitics" will continue to define the strategic outlook of the two nations, which, if not tossed out, will result in predictable disasters.

Brzezenski, The Great Game, And Afghanistan

Most press reports incorrectly identify the origin of the U.S. quagmire in Afghanistan as a response to the deadly terrorist attacks against the U.S. on September 11, 2001. The U.S. invaded Afghanistan on October 7, 2001, based on intelligence which attributed the attack to forces run by Osama bin Laden, who was based in Afghanistan, and who was given safe haven there by the Taliban government. The Taliban government fell shortly after the U.S. invasion, but the U.S. and its NATO allies remained for another twenty years.

But the actual U.S. military involvement in Afghanistan began more than two decades earlier, when U.S. National Security Adviser, Zbigniew Brzezinski unleashed a plan to lure the Soviet Union into that nation. In an interview with {Le Nouvel Observateur} published January 15-21, 1998, Brzezinski boasted that he convinced President Carter to issue a directive to provide secret support to the opposition to the pro-Soviet regime in Kabul, that is, to mujahideen forces which later became the Taliban and Al Qaeda! The directive was issued on July 3, 1979; the Soviet invasion occurred on December 24, 1979.

In the interview, Brzezinski said, "I explained to the president that this support would...lead to a military intervention by the Soviets." By providing this aid to the Mujahideen forces, the U.S. "didn't push the Russians to intervene but we knowingly increased the probability that they would do it." Asked if he had any regrets, he exclaimed, "Regret what? This secret operation was an excellent idea. It lured the Russians into the Afghanistan trap." He said he acted on an "opportunity to provide the USSR with their Viet Nam war." The U.S. continued to arm and train the mujahideen throughout the 1980s, making them the dominant power in the country when the Soviets withdrew. 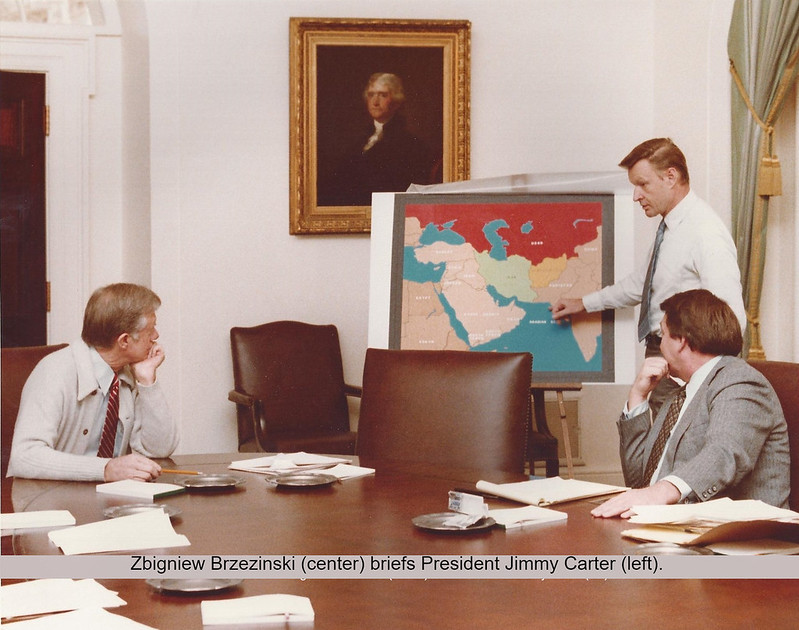 Brzezinki's plan grew out of his study of the mid-19th century inter-imperial rivalry between the British and Russian empires, known as the "Great Game." The British feared that the Russians intended to expand their empire southward, to the Indian Ocean, so they deployed forces to Afghanistan, to use it as a buffer, to contain what they believed was a Russian thirst for expanding their empire. Similarly, the British, with the French and the Ottomans, launched the Crimean War against Russia, from 1853 to 1856, to keep Russia out of the Mediterranean.

The Great Game was later expanded into a global doctrine by Royal geographer Halford Mackinder, whose lecture in 1904, "The Geographical Pivot of History" provided the basis for the geopolitical doctrine which defines strategic policy for the British and their American allies to this day. Mackinder formulated his theory in a simple maxim, arguing that:

It is this doctrine, which was adopted as a defense of the British Empire and its "democratic values" -- which in reality, means its global financial/colonial interests -- which justified British intervention against any potential alliance which challenged its supremacy. Its application was directly responsible for World Wars I and II, and for the carving up of the area of southwest Asia, to create nations with built-in instabilities.

In {The Grand Chessboard: American Primacy and Its Geostrategic Imperatives}, published in 1997, Brzezinski acknowledged Mackinder as his inspiration. For him, as for Mackinder, he wrote "the prize is Eurasia." He developed the concept of the "Arc of Crisis" as a "zone of instability", in which Islamic forces living in the nations on the southern flanks of Russia could be deployed against the USSR.

The arc included the Transcaucasus and Central Asia, and was used to shape not only the policy towards Russia, but the Mideast as well. Graham Fuller,a close ally of his who served as CIA station chief in Kabul from 1975 to 1978, wrote that Islamic fundamentalism can be used "to bring about change in the Muslim world."

In his memoirs, Brzezinski wrote that he began to "press the 'Arc of Crisis' thesis...to reassert U.S. power and influence in the region," acknowledging that this is a new version of the British Great Game.

The foreign policy team of President Biden, including Blinken and Sullivan, is heavily influenced by Brzezinski's lunatic application of British geopolitics, in large part through one of those he mentored, former Secretary of State Madeleine Albright. The idea of the "Pivot to Asia" being pursued today, is derived from Mackinder, as is the concept of a RBO of arbitrary rules enforced by military force. The assertion of the U.S. right to unilateral action today, from Pompeo to Blinken, echoes Brzezinski's claim that for the U.S., as the "first truly global superpower", it is "imperative that no Eurasian challenger emerges, capable of dominating Eurasia and thus also challenging America."

For those hoping that "realists" in the military can protect us from wars resulting from these imperial ambitions, the comments of the military chief directing the Afghan war mission under Bush and Obama, Lt. Gen. Douglas Lute, are instructive. Lute wrote in 2014, "We were devoid of a fundamental understanding of Afghanistan -- we didn't know what we were doing....What are we trying to do here?" He concluded that it is unlikely the American people would support such wars, if they "knew the magnitude of this dysfunction" in the long, destructive involvement of U.S. and NATO forces in Afghanistan.

With U.S. troops leaving Afghanistan, it is now up to the American people, working in collaboration with other nations, to ensure that the U.S. rejects geopolitics, so that one quagmire is not replaced by an even more brutal, and potentially deadly war. The pathway for change, based on collaboration for mutual benefit, rather than confrontation, was presented in a strategic memo written by Helga Zepp LaRouche, "Afghanistan at a Crossroads: Graveyard for Empires or Start of a New Era?". It is long overdue, after forty years of destruction unleashed on the Afghan people, and two decades of war in southwest Asia, for the era of imperial geopolitics to be put to an end.