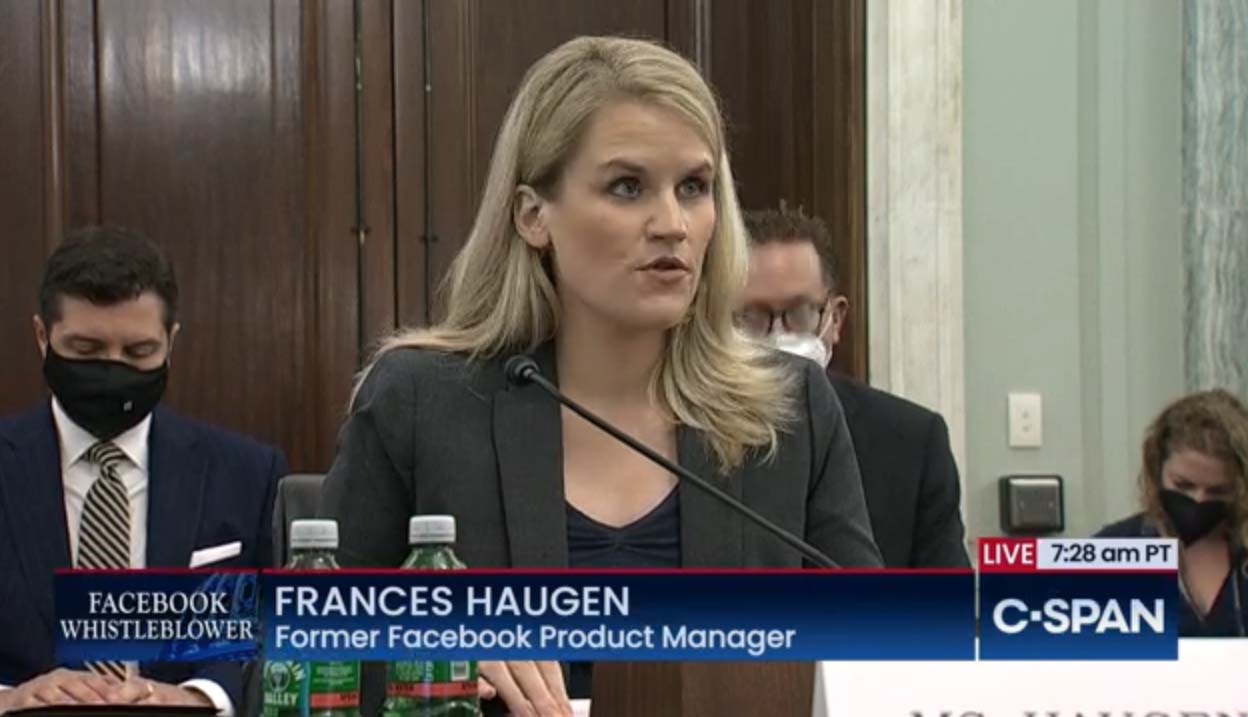 That Facebook exercises enormous power over discourse and social interactions cannot be denied. The House Antitrust Committee considers the social media giant—along with Google, Amazon, and Apple—as monopolies, in violation of the essentially dormant antitrust laws.

From this standpoint, calls for regulating the social media giants might seem to be a useful way of preventing these giant players from exerting outsized influence over speech and thought.

But the vast majority of regulations and regulatory powers sought by the Congress and Biden Administration would achieve precisely the opposite effect, consolidating the monopoly status of these firms, preventing the rise of competitors, and using that power to censor speech that offends the revealed Truth of the would-be tyrants.

Enter Frances Haugen, a telegenic and seemingly informed “insider” acting as a courageous “whistleblower” to inform a shocked country of the terrible effects of Instagram and Facebook. The crime of Zuckerberg? He “has allowed choices to be made where the side effects of those choices are that hateful and polarizing content gets more distribution and more reach.” The New York Times summarized her testimony as “calling for regulation of the technology and business model that amplifies hate.” The London Economist enthuses that her testimony may bring together the U.S. Senate, “united against a common enemy and promis[ing] Ms. Haugen that they would hold Facebook to account.”

Haugen’s supposed act of whistleblowing appears as though coordinated by a PR firm to advance the growing calls for censorship over speech.

Over the last three years, the percentage of U.S. adults who align with or lean towards the Democratic Party who want tech companies to take more steps to “restrict false info online” rose from 60% to 76%. And the percent among that demographic who want the U.S. government itself to restrict “misinformation” online soared from 40% to 65%!

Nearly two-thirds of the people in this grouping now oppose the tradition of free speech, enshrined in the First Amendment, defended by the old ACLU that supported the rights even of neo-Nazis to rally, and attacked by Sen. Joe McCarthy who attempted to make certain political views essentially illegal.

Today, the Congressional committee investigating the events on Capitol Hill on January 6 is pursuing a broader and broader scope of investigation reminiscent of McCarthy’s vile actions of the 1950s. Will those called to testify be asked, “Are you now, or have you ever been, a supporter of Donald Trump?”

Increased regulation of the social media space would not only be an obvious violation of the First Amendment, based on a series of court rulings that when the government compels private actors to censor speech, it is effectively the same as the government doing so directly (and unconstitutional).

Furthermore, it would make the monopoly powers yet more entrenched, by creating an enormous barrier to entry. Developing a comprehensive comment/posting moderation workflow is enormously expensive, and would be absolutely impossible for new entrants that could compete with Facebook and Google, which are playing in the internet space the role assumed by the legacy media.

Breaking up the monopolies, demanding that Congress not legislate speech codes (either directly, or through the indirect means of threats), and reforming the Section 230 protections offered to social media companies in a way that distinguishes between truly free platforms and those that censor—these would be useful paths forward.

But the intention of glorifying the testimony of Haugen, lauded by Sen. Ed Markey (D-MA) as “a 21st century American hero” is precisely the opposite—designed to promote “getting tough on Facebook” in a way that would both strengthen its monopoly power and force a greater censorship of political viewpoints.