Nuclear Fusion: Power for the Future

By the year 2100, human civilization should require 100 times as much power as it consumes today. How will this be provided?

When it comes to powering the human species, technologies of higher energy and power density are the path to progress. There is no power source on the horizon that packs a bigger punch than nuclear fusion, the process that powers the sun itself.

The weakest forms of power are of a physical nature: flowing water, blowing wind, or the direct motion of people or animals. Far superior is the chemical power provided by fire, first from wood and later from sources such as coal, oil, and natural gas, which allow for efficient engines to create motion. The nuclear power of the atom itself is one million times greater than that of chemical reactions.

Current power plants operate by nuclear fission—the breaking apart of large nuclei (primarily uranium) in a process that puts previous power sources to shame. But nuclear fusion is still greater, with higher energy intensities and potentially much easier conversion to power on earth, and to rocket thrust in space.

In fusion, small nuclei are combined. This is what powers the sun, whose enormous mass drives the nuclei together and causes them to react. Here on earth, we must drive the nuclei together in other ways—with magnets, electron beams, lasers, and other technologies.

Most experiments use a combination of two kinds of hydrogen, known as deuterium (D) and tritium (T). When they react, they produce what is called an alpha particle (α, a helium nucleus) and a neutron (n). Although the D and T nuclei and the α have positive charges, and can therefore be controlled by magnetic and electric fields, the n does not. This means that in the tokamak—a magnetic bottle that holds D and T plasma at tens of millions of degrees—the n will not be controlled by the magnetic bottle, and will crash into the walls of the device. This creates heat, but it also degrades the device over time. 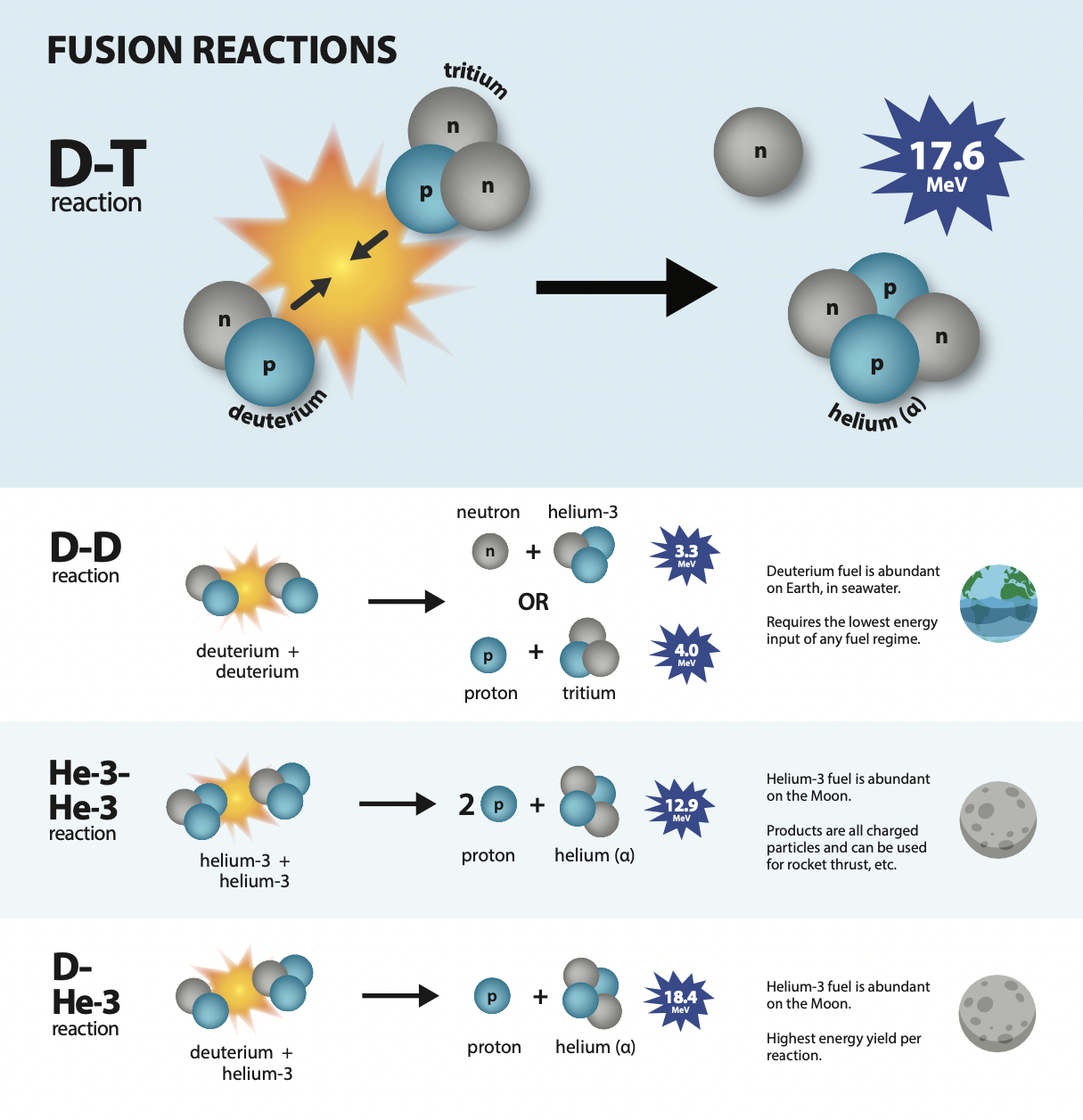 In nuclear fusion, very small nuclei are caused to fuse together, releasing—per mass of fuel—even more power than fission reactions.

A far superior nuclear fusion fuel is a special isotope of helium, known as helium-3. This isotope has two protons (which makes it helium) and one neutron (giving a total mass of 3). When helium-3 reacts with D, the results are an α and a proton (p). Since both the α and p can be controlled by magnetic fields, this means they can more directly be converted into electricity through a process known as magnetohydrodynamics or used as directed thrust from a rocket.

With nuclear fusion, we overcome limitations imposed by lower forms of power:

• A lifetime’s supply of electrical power produced from only grams of fuel per person.

• An entirely new relationship to mining, whereby even low-quality ores (or landfills!) could be productively sifted to draw out useful elements by using a powerful technology called the plasma torch.

• A fundamental expansion of our relationship to the solar system, where rockets could be fired not only for a few minutes including their takeoff, but for the entire flight, making a journey to Mars, which takes many months under current conditions, a trip of only a week’s duration! This will dramatically expand our ability to protect our home planet from asteroids and comets headed our way.

This all sounds great … but where can we find this fuel? It turns out that the best nearby source is on the moon! While advocates of solar panels collect the feeble light reaching our planet from the sun, fusion pioneers have discovered a far superior emanation from that heavenly body—a stream of helium-3 particles, which are deflected from Earth’s surface by our magnetic field, but obligingly lodge themselves in the lunar crust, just waiting for us to liberate them to perform useful activity in the service of human development and further human creativity.

Will we bring this unique isotope into our expanding collection of resources?