Tensions Over Taiwan Increase War Danger Between U.S. And China

by: Harley Schlanger
Nov. 1 -- At a CNN town meeting on October 21, President Joe Biden was asked if the U.S. would come to the aid of Taiwan, if it were attacked by China. His response -- "Yes, we have a commitment to do that" -- set off alarm bells, not only in Beijing, but within his administration, as a spokesman was quickly dispatched to walk back from that answer.

But a week later, more bombshells went off, again on CNN, in an interview with Taiwan's President Tsai Ing-wen. She said she believes that the U.S. and other regional allies would come to the aid of Taiwan if it were attacked. Further, she confirmed the report that a "small unit" of U.S. Army special forces have been deployed on the island to train members of Taiwan's military. She added that while she thinks there can be peaceful relations with China, the threat from the mainland "is increasing every day", as it is becoming more aggressive.

Provocations over Taiwan were also enunciated by the new U.S. Ambassador to China, Nicholas Burns, during his confirmation hearing, and by Secretary of State Blinken (see below). Yet, simultaneous with these comments, meetings have been convened between Biden administration officials and their counterparts from China, which were characterized by both sides as positive steps, with Xinhua reflecting the Chinese view that these were "constructive exchanges in the spirit of equality and mutual respect." These conflicting developments raise the question, "Who is making U.S. policy toward China?"

The latest round of diplomacy was initiated by a lengthy phone conversation between Presidents Xi and Biden on September 9, in which both leaders agreed to engage to stabilize the relationship. This was followed by publicly acknowledged communications by officials, including:

--- an October 6 meeting of six hours in Zurich between U.S. National Security Adviser Jake Sullivan and Yang Jiechi, the Director of China's Central Commission for Foreign Affairs. One of the results of this meeting was the announcement of a plan for a virtual summit between Xi and Biden before the end of the year;

--- a virtual meeting on October 9 between U.S. Trade Representative Katherin Tai and China's Vice Premier Liu He. They discussed how to break the devolution in U.S.-China trade ties, which has plummeted along with relations in general, since the failure to advance the initial deal on trade reached between Xi and former President Trump. This "Phase I" deal was signed January 15, 2020 at the White House, by Trump and Liu He;

--- a call between U.S. Treasury Secretary Janet Yellen and Liu He, which was seen by both sides as "candid and practical", though no specific results were announced.

--- two days of talks, concluding on September 30, between leading officials of the U.S. Department of Defense and China's Peoples Liberation Army Office for International Military Cooperation. According to the U.S. readout, the talks were held to maintain "open lines of communication", aiming to "responsibly manage the competition" between the two nations.

Taken together, these discussions point to a commitment to improve relations through diplomacy. The need for open lines of communication was again brought to the fore by the successful launch by China of a hypersonic missile on July 27. General Milley, the chairman of the U.S. military Joint Chiefs of Staff, told Bloomberg television that while he's not sure that this is "quite a Sputnik moment" -- a reference to the October 4, 1957 launch of a Russian missile, which led to recognition that the U.S. had fallen behind the Soviets technologically and scientifically in the arms race -- it is "very close to that. It has all of our attention."

A Series of Provocations By The U.S.

Alongside the potentially positive moves to talk has been a string of provocations, which have heightened the tension between the two nations. These include:

--- Ongoing deployments of U.S. and NATO forces to the Indo-Pacific region, allegedly to counter Chinese "aggression" and "bullying" of its neighbors. The talk of an "Asian NATO" has continued, bolstered by the signing on September 15 of an "enhanced trilateral security partnership" between Australia, the United Kingdom and the U.S., which is centered around providing U.S. nuclear submarines to Australia. This was identified as a means of strengthening Australia's defense capability against China;

--- The Biden "slip" on Taiwan was doubled down by Blinken's comments on October 26 that the U.S. supports "robust participation" by Taiwan in the United Nations. This was seen in Beijing as part of a campaign to encourage Taiwan to pursue independence, in violation of a multitude of treaty provisions and U.N. resolutions which affirm the "One China" policy -- which Biden himself recently again said is the basis of U.S. policy toward China. The Chinese stated this is a provocation, and is crossing "a red line".

--- The announcement on October 11 that the CIA has established a new China Mission Center. According to CIA Director William Burns, this is "to address the global challenge" posed by China, which he described as "the most important geopoliticl threat we face in the 21st century." A former CIA official, John Doyon, said this represents a shift from an emphasis by the agency of counterterrorism, to addressing "threats from near-peer competitors." It is designed to supplement the work of the FBI -- according to FBI Director Christopher Wray in a speech in July 2020, the bureau "opens a new counterintelligence case involving China every ten hours."

--- The revocation of authorization for China Telecom's U.S. subsidiary to operate in the U.S., due to "security concerns."

The appointment of long-time U.S. war hawk Nicholas Burns, who is a leading figure in virtually every Anglo-American Military-Industrial Complex think tank, as ambassador to China, adds to the picture of provocations. In his confirmation hearing on October 20, Burns levelled a series of defamatory accusations against China. Among other slanders, he accused China of committing "genocide in Xinjiang province" against the Uighur minority, a charge repeated, without evidence, by the anti-China lobby. He added the standard line that China is "bullying" its neighbors, and running "intimidation campaigns" against them. Given his own history in coordinating policies of mass murder by U.S. forces in Iraq and Afghanistan, this is typical of the arrogance of those who see the U.S. as the unipolar power in the world, making such evidence-free charges against others, while engaging in such actions themselves! 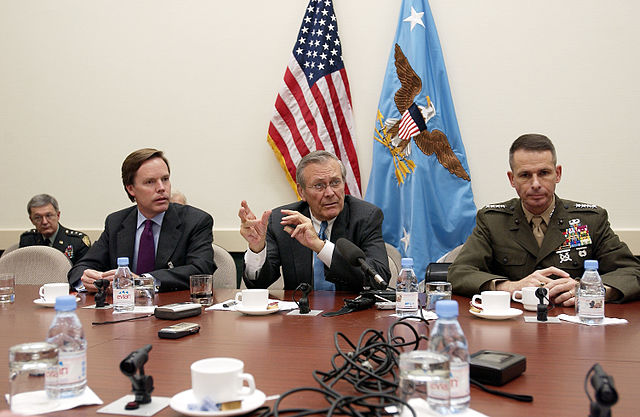 He concluded his provocative remarks against China by stating, "We should be confident...and we can stand up to the Chinese," who he declared to be the "greatest threat to the security of our country."

Among other postings, Burns was the spokesman for Secretary of State Madeleine Albright during the Clinton administration, from 1995-97, when more than one-half million Iraqi children died due to sanctions imposed by the U.S. Albright later defended the mass murder of children as "worth it", to undermine the Saddam government. Burns was appointed U.S. Ambassador to NATO in August 2001 until 2005 by George W. Bush, during which time he played a role in coordinating U.S.-NATO invasions of Afghanistan and Iraq. When he left his NATO ambassadorship, he served as Undersecretary of State to Condoleezza Rice, as the "endless wars" conducted by the U.S. continued.

Upon leaving government, he became a board member of the leading Anglo-American think tanks advocating geopolitical confrontation with Russia and China. These included the Atlantic Council, which in January published "The Longer Telegram", which promoted intervention in Xi Jinping's government, to effect a regime change; the Council on Foreign Relations, and the Rockefeller Brothers Fund. He serves as Executive Director of the Aspen Security Forum, and senior adviser at Chatham House. He also is employed by the Cohen Group, a consulting firm and lobbying group for arms manufacturers.

Wang Wenbin, a spokesman for China's Foreign Ministry, responded sharply to Burns' testimony, saying he should "view China and China-U.S. ties in a rational manner and avoid underestimating the strong resolve, determination and capability of the Chinese people to defend their rights."

Given Burns' track record, it is difficult to imagine that he will accept such advice.

In analyzing the overall pattern of the U.S. administration behavior toward China, in which potentially positive developments have been more than countered by war-like actions and propaganda, the Schiller Institute's chairwoman, Helga Zepp-LaRouche, described the situation in an October 27 webcast as "highly dangerous! This is completely insane, and there is no good reason for it, other than trying to provoke China and cause absolute havoc."