War Talk in Washington, London on Eve of Biden-Putin Summit

by: Harley Schlanger
June 11 -- Buoyed by praise from Congressional Democrats and Republicans for his commitment to "stand up to Russia and China", Joe Biden's first words on arriving in the U.K. for a series of summits reflected that bipartisan consensus. 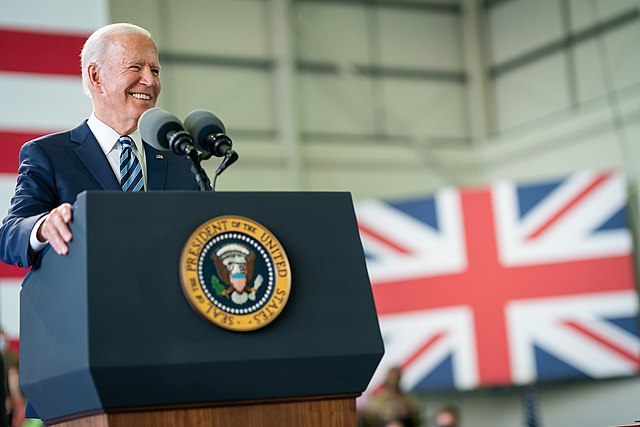 "I'm headed to the G7, then to the NATO ministerial and then to meet with Mr. Putin, to let him know what I want him to know," he boasted to a gathering of U.S. Air Force personnel at a British air base, sounding more like a mafia boss than a statesman. Offering the now-standard administration comment on the summit, that he is "not seeking conflict" with Russia, but a "stable predictable relationship", he fell back to his combative persona, saying "I've been clear, the United States will respond in a robust and meaningful way when the Russian government engages in harmful activities. We've already demonstrated that. I'm going to communicate that there are consequences for violating the sovereignty of democracies in the U.S. and Europe and elsewhere."

Prior to his departure, Biden wrote an op ed which was published by the {Washington Post} on June 5, in which he stated that the purpose of his trip is to rally "the world's democracies" to "write the 21st century rules", which will "ensure...our values." One wonders whether Putin will ask him if those values include lying to justify destructive regime change wars, as in the case of the fabrications about Iraq's alleged Weapons of Mass Destruction, (a war which Biden supported), or sanctions which are killing innocent civilians, including children, in Yemen, Syria and elsewhere!

The threatening language aimed at Russia echoed two days of testimony of Secretary of State Antony Blinken, on June 7 and 8, before Congressional committees. Blinken told an approving audience of members from both parties that the U.S. will no longer tolerate "destabilizing actions from Moscow." He reiterated what he said repeatedly in visits to London, Brussels and Kiev in the last month, that the U.S. expects Russia "to cease reckless and aggressive actions", and that Biden will convey that message directly to Russian President Putin.

This message was reinforced by National Security Adviser Jake Sullivan, who told reporters that Biden will be clarifying "what our expectations are and laying out that if certain kinds of harmful activities continue to occur, there will be responses from the United States." Presidential spokeswoman Jen Psaki said that Biden "won't hold back" from confronting Putin, but then played down the importance of the meeting with Putin, saying that "we're not expecting to have a huge outcome from the summit."

Despite generally receiving rave reviews for his testimony, there were some members of Congress who applied more pressure on Blinken -- who will accompany Biden on the meeting with Putin -- criticizing Biden for issuing a waiver of sanctions to the company and its CEO involved in constructing the Nord Stream 2 pipeline. Democratic Senator Robert Menendez called the waiver a mistake, saying Biden "must move forward with congressionally mandated sanctions" to shut down the project. Fellow Democratic Senator Jeanne Shaheen expressed her "disappointment" in Biden's decision, saying that completing the pipeline "poses a threat to U.S. security interests....Every option available to prevent its completion should be utilized." Republican Senator Ben Sasse chimed in, claiming that the waiver is "rewarding Putin's malign behavior," adding that, instead, the U.S. should be "treating Putin like a gangster who fears his own people."

The vulgar Republican Senator from Texas, Ted Cruz, was less polite than his Democratic colleagues. Cruz stated, "In defiance of U.S. law, Biden is actively helping Putin build his pipeline." He accused the Biden administration of being "the most pro-Russian administration of the modern era," despite its sanctions against Russia for a number of "malign actions" conjured up by anti-Russian War Hawks. Cruz co-authored the expansion of the original Nord Stream 2 sanctions bill with Shaheen.

In response, Blinken promised the Senators, "Our opposition to the Nord Stream 2 pipeline is unwavering."

Not surprisingly, no voice was raised to challenge the right of the U.S. to unilaterally demand that an energy project negotiated between Russia and a number of European countries, and contracts involving many private companies, be shut down, nor could they explain how such a project threatens U.S. "security." This position of "robust unilateralism" underlies the Biden position in this week's three summits, as he will endeavor to rally an "Alliance of Democratic States" to take on the threat perceived to be coming from an "aggressive" Russia, and from China.

Prior to the summit, Blinken conducted a tour in which he touted the defense of the "Rules-Based Order" (RBO) at every stop. Backing up his charge that Russia is a threat to "democratic" countries, he presented a laundry list of allegations, which include: suppression of democratic opposition in actions taken against British-U.S. backed "dissident" Navalny, who was allegedly poisoned by Putin operatives -- without presenting any evidence to prove this charge -- and against Navalny's regime change movement; military threats to invade Ukraine, which were never made; cyber-attacks on crucial U.S. infrastructure, a charge coming from the usual anonymous U.S. intelligence sources, with no evidence to back them up; similar charges of interference in the 2020 U.S. election; and the charge that Russia was involved in the diversion of a Ryanair flight by Belarus, to capture a western backed "dissident" with ties to pro-Nazi forces in Ukraine and funding from U.S. and British agencies. 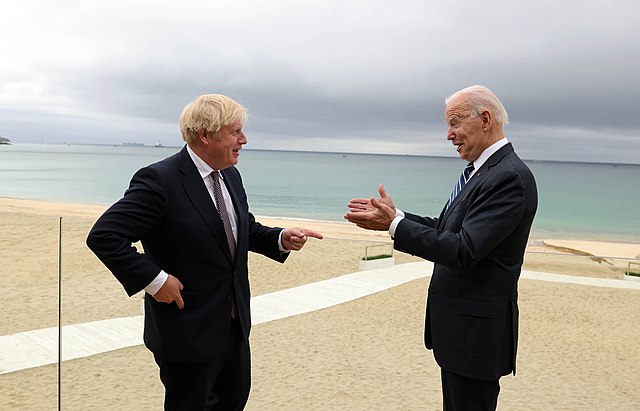 This commitment to counter the "Russian threat" was at the center of Biden's first meeting, with British Prime Minister Boris Johnson. According to a White House spokesman, they discussed the "security dimension, with an unparalleled defense and security alliance...an economic dimension, the robust economic partnership....And, of course, the relationship is also about democratic values." They signed a new Atlantic Charter, to update the original agreement that Franklin Roosevelt negotiated with Winston Churchill in 1941. Needless to say, they neglected to mention that key to the Charter was FDR's insistence that language be included which pointed to an end to the British empire and colonialism at the end of the war. Instead, Biden and Johnson pledged to build a "united front of democracies" to stand up to Russia and China.

The mainstream media is playing its usual role, fueling the confrontational environment, with the London {Guardian} headline, "Joe Biden's Mission at the G7 Summit: To Recruit Allies for the Next Cold War." More chilling was this headline from {Yahoo News}: "Summit with a 'killer': What to expect out of Biden's meeting with Putin."

Pushback Against The War Rhetoric

A threat to extend sanctions, to exclude Russia and Russian businesses from access to the SWIFT transaction system, which was raised by Biden, led to a sharp comment from Russian Foreign Minister Lavrov, who said that while Russia has an alternative to SWIFT, "We are not interested in destroying the mechanism underlying the functioning of the international currency system and, generally the international economic system." Officials in Russia and China, as well as in most G7 countries, are well aware that the western financial system has been drastically weakened by 50 years of neoliberal policies, and is teetering toward collapse. Lavrov continued, ridiculing anti-Russian rhetoric and actions, saying there is no "Russian threat," adding that Russia is not an "adversary [spreading] malicious influence all over the world." As far as financial warfare is concerned, U.S. sanctions to limit transactions between U.S. financial firms and the Russian government, imposed to punish Russia for its alleged role in the hacking of the Solar Winds tech conglomerate, will go into effect on June 14 -- two days before the Biden-Putin summit. 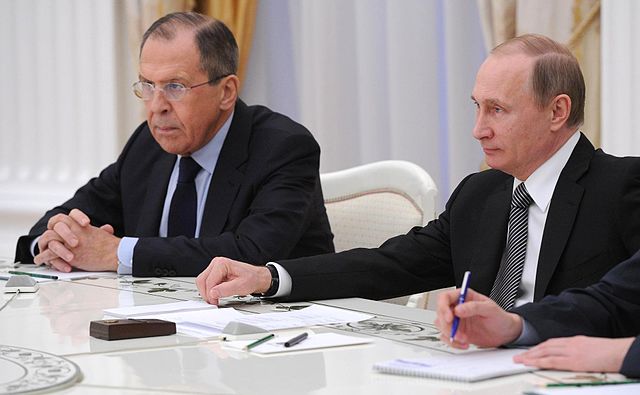 Putin offered an astute observation about the attempt to use the upcoming summits to enforce a global RBO, which he identified as a feature of a dying imperial system. Speaking as a self-described "citizen of the former Soviet Union," he said, "The problem of empires is that they think they are so powerful that they can afford small inaccuracies and mistakes. But problems keep piling up. And, at some point, they are no longer able to cope with them. And the United States is now walking the Soviet Union's path, and its gait is confident and steady" (emphasis added).

A similar observation came from former presidential briefer Ray McGovern, who was a CIA analyst for 23 years. He said the Biden administration "is behaving with arrogance and a sense of entitlement, firing missiles into Syria, blustering over Ukraine, and dispatching naval vessels into the Black Sea and waters near China."

McGovern continued, saying "Biden is not his own man...and Putin...knows this all too well. The Military-Industrial-Congressional-Intelligence-Media-Academia-Think-Tank Complex is still calling the shots." McGovern, a co-founder of the Veteran Intelligence Professionals for Sanity, is speaking for a growing number of individuals who are now compelled to come forward, to head off the geopolitical provocations of the War Hawks controlling the Biden administration, which are leading the world toward the abyss of a potential nuclear World War III.