The relentless escalation of war provocations, when paired with the lying reports of a "coming economic boom" -- both the product of the diseased minds of those running the "Military Industrial Complex" and pushing the "Great Reset" -- is a threat to the people of all nations.  No matter what economists say, a growing cancerous debt bubble is not a sign of economic health!  As we forecast, these utopian schemes can be derailed.  One example is the rejection by India's Energy Minister of the "net zero" plan pushed by the Biden administration.  To join us in defeating the push coming from the bankrupt Trans-Atlantic establishment, order your copy of our report, "The Great Leap Backward" at this link:  https://larouchepub.com/special_report/2021/green-new-deal/index.html

As charges and counter-charges proliferate, and military forces are in motion, the danger of war in eastern Ukraine is increasing daily.  While blaming Russia for "malign intent", the actual cause of the tension is the geopolitical intent for regime change in Russia, which has escalated since the Maidan coup in Ukraine in February 2014.  President Biden was Obama's point man in organizing  that coup, and has a long record as an anti-Russian war hawk, typified by his recent admission that he believes Russian President Putin is a "killer."  One of his top advisors on Russia, Michael Carpenter, has openly praised the self-avowed neo-Nazi and former top Ukrainian security official and member of parlaiment Andriy Parubiy.

There Is an Alternative to Green Depopulation and Neocon Wars

Posted by Malene Robinson · April 02, 2021 2:42 PM
Friday Questions -- Don't be fooled, Biden's "Earth Day Summit" is not about a "clean" environment, but about deindustrialization and depopulation -- but it can be derailed.  What is behind the heightened tensions between Russia and Ukraine?  Will the "endless wars" continue?  What is the Atlantic Council?  What will the long-term effect be if psyops specialists, such as those who wrote the paper at Oxford University denouncing Mozart and Beethoven as composers whose works perpetuate racism, are not countered -- can classical culture survive?.
Read more
1 reaction Share

Do you know who is producing the reports of "human rights" violations by China in Xinjiang province against the Uyghur minority?  It shouldn't surprise you to hear that these lies, repeated endlessly by Mike Pompeo and Antony Blinken, come from the same networks behind the regime change wars of the last two decades -- and from the very same people and institutions which ran Russiagate and the Ukraine impeachment against President Trump.  Not only that, but they are the same networks, including in the mainstream and social media, which are trying to push through the Great Reset global central banker's dictatorship, and the genocidal Green New Deal; and who run Joe Biden's administration.

Secretary of State Blinken, as an official of the Obama administration, objected that not enough bombs were being dropped to carry out regime change in Syria. He has now endorsed the murderous sanctions policy of Trump's Secretary of State Pompeo against the Syrian people. And while the military is still stuck in "endless wars" in southwest Asia, the Biden Department of Defense announced that "climate change" will be its priority #1 -- of course, in tandem with a build-up in the Indo-Pacific region in preparation for war with China, a strategy also borrowed from the War Hawk Pompeo. Watch the videos linked below from the March 20-1 Schiller Institute conference, and join our mobilization to defeat the War Hawks and neo-liberal Greenies who are committed to destroy the U.S. as a sovereign republic.

Insanity of the Speculative System on Display: The Archegos Story

Nervous traders watch Federal Reserve Chair Jerome Powell, as yet another hedge fund threatens to unleash huge losses, due to a bet gone bad.  The unravelling of speculative positions held by Archegos, triggered over $6 billion in losses, hitting major banks which were lenders to the firm.  Will the Fed keep interest rates low, to allow the speculative binge to continue indefinitely?  And what will happen if they finally admit that inflation is eating away the value of the dollar?  Never fear, the Biden administration is preparing to boost the Green Financial Bubble with $3 trillion in a fake infrastructure bill.  Whatever happened to real economics?

Why Do Biden's Controllers Fear China's Belt and Road Initiative?

Have you been duped about China? Harley Schlanger calls out the blatant lies about China by the British Empire and their pawns in the Biden and former Trump administration. The British, Antony Blicken, and Mike Pompeo don't care about "human rights" in the Xinjiang province in China anymore than they "care" about the environment. What they fear is the rational, scientific approach to economy outlined clearly by Lyndon LaRouche throughout his life, which is now being carried out by China's Belt and Road Initiative.

Posted by David Dobrodt · March 29, 2021 10:03 AM
Joe Biden and Boris Johnson must believe their populations are so brainwashed that they would accept a multi-trillion dollar bailout of financial speculators as a "program to rebuild infrastructure".  But that is precisely what the upcoming "Climate" conferences are about, creating momentum behind the Great Reset -- which would establish a global central banker dictatorship -- and the global Green New Deal, which would lead to a drastic reduction of world population.  The greatest fear of the Davos billionaires is that the people can be awakened to reject these policies, and that an alliance between the U.S., Russia and China will adopt LaRouche's program for a New Bretton Woods, based on fixed exchange rates, regulated banking -- i.e., no bailouts or bail-ins -- and investment in physical economic production, not mountains of credit to corrupt speculators.

Who and what is shaping Biden's Policy towards China?

March 26 -- A series of recent events has increased tensions between the nations of the Transatlantic region and China, in a way which was characterized by Schiller Institute leader Helga Zepp-LaRouche as "increasingly worrisome." Tensions were raised in the opening of a summit in Alaska between U.S. officials, Secretary of State Antony Blinken and National Security Advisor Jake Sullivan, and Chinese foreign policy officials Wang Yi, the Foreign Minister, and the Director of the Central Committee for Foreign Affairs Yang Jiechi, as Blinken read through a standard laundry list of allegations against China, leading to a sharp counter from the Chinese. 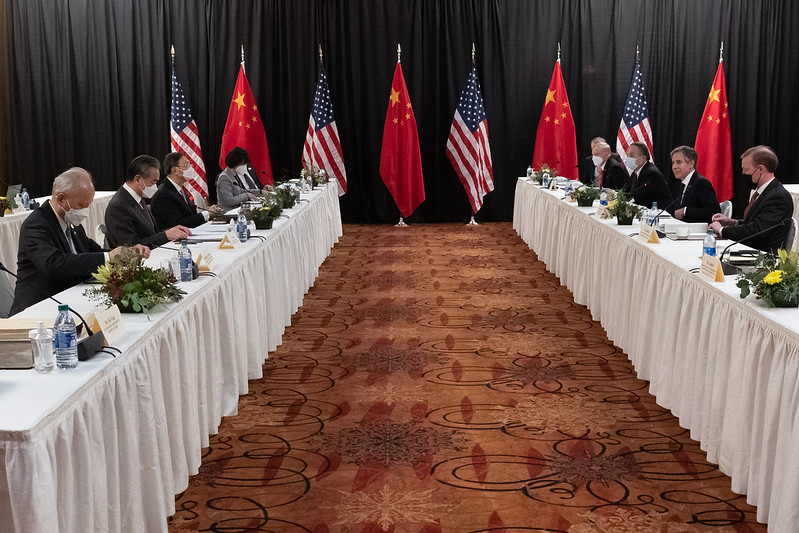 Secretary of State Blinken and National Security Advisor Sullivan' meet with CCP Director of the Office of the Central Commission for Foreign Affairs Yang Jiechi and State Councilor Wang Yi in Alaska.

How is Biden's policy toward China, as seen in last week's "summit", different from Trump's approach to U.S.-China relations? What is behind German Chancellor Merkel's recent vacillation related to COVID lock-downs, and why is Europe so far behind in vaccinations? What is the relationship between an American System economic approach, as exemplified in FDR's New Deal, and pursuit of peaceful, cooperative relationships with other nations? And how do you approach organizing others on complex issues, such as nuclear power, when there is so much anti-nuclear propaganda to sort through?